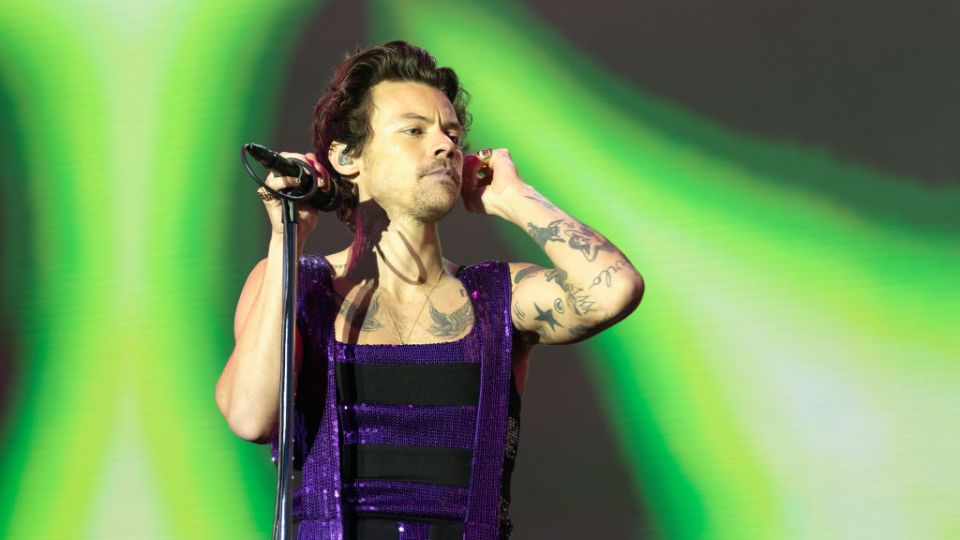 Harry Styles at Radio 1's Big Weekend 2022 at the War Memorial Park on May 29 in Coventry, England. Photo: Getty

Harry Styles is an enigma.

He’s a singer, songwriter, performer, actor, a pop culture icon and the most flamboyantly dressed stage act who dances about in scarves, beaded necklaces, sleeveless sequinned jumpsuits and, above all else, a joi de vivre.

He loves everyone. He embraces his fans and reads out placarded messages for gender reveals and proposals from the crowd.

This year alone, we’ve seen the former One Direction boy band member attract massive audiences at large stadia and music festivals around the world, get cast in a stream of Hollywood movies, and play along with late night US TV host James Corden to make a music video for $300 at a random New York apartment.

He’s nominated for six MTV Video Music Awards, and seems to have a book published about him every few months – the latest, Harry Styles, The Making of a Modern Man, comes courtesy of the Sunday Times’ bestselling author Sean Smith.

But that’s just the tip of the iceberg for the boy who was discovered in 2010 after auditioning for British music competition The X-Factor as a 16-year-old from rural Cheshire in the UK.

Last week, Texas State University announced it will become the world’s first university to offer a course exclusively on the work and influence of the British singer-songwriter who’s captured the hearts of millions through his music, good looks, humble persona and adorable dance routines.

History professor Dr Louie Dean Valencia, who holds a PhD in Early and Late Modern European History, will be teaching the class called Harry Styles and the Cult of Celebrity: Identity, the Internet, and European Pop Culture.

The story of his life

When Styles walked into the X-Factor studios 12 years ago, the judges thought his first solo audition was great, but they had bigger plans.

Future members of One Direction, including Liam Payne, Niall Horan, Zayn Malik and Louis Tomlinson, also auditioned, with the judges concluding the young teenagers were better equipped as a group than as solo artists.

They achieved worldwide fame in four tours as a handsome quintet, following in the footsteps of other success stories including Manchester group Take That, New Kids on the Block, ‘N Sync and the Spice Girls, using social media and merchandise to propel their fan base.

Their debut single in 2011, What Makes You Beautiful, was a commercial and international success, but it was their 2014 music video starring and directed by Hollywood royalty Danny deVito in the desert somewhere that was transformable.

DeVito said Harry represented “Love”. And he was right.

By 2016, One Direction went on an indefinite hiatus, and Styles skyrocketed to international stardom filling arenas, developing an enviable fashion style and avoiding the social media bandwagon.

“When you look at the history of people coming out of bands and starting solo careers, they feel this need to apologise for being in the band. ‘Don’t worry, everyone, that wasn’t me! Now I get to do what I really want to do.’ But we loved being in the band,” he told Variety in 2020.

“I think there’s a want to pit people against each other. And I think it’s never been about that for us. It’s about a next step in evolution. The fact that we’ve all achieved different things outside of the band says a lot about how hard we worked in it.”

He auditioned for a part in the 2017 Christopher Nolan epic Dunkirk, and beat thousands of others to land his first acting role.

He was getting noticed.

Meanwhile, his talent as a “skilled lyricist with a tremendous ear for harmony and melody” saw his star rise to the clouds.

After dancing his way around the stage at Californian music festival Coachella, where his costumes and style established a new benchmark in live musical performances, Harry’s transformation was complete.

Variety pointed out he “takes pride in his gender-agnostic portfolio”, which included wearing a Gucci dress on the cover of Vogue in December, 2020.

“To not wear [something] because it’s females’ clothing, you shut out a whole world of great clothes. And I think what’s exciting about right now is you can wear what you like. It doesn’t have to be X or Y. Those lines are becoming more and more blurred,” he says.

Vogue points out he’s been a pescatarian, meditates and does pilates, and is interested in global issues including the Black Lives Matter uprising around racial injustices in the US.

So what is Professor Louie going to teach his students?

On July 22, Professor Louie told the Texas Standard that while he was a huge Harry fan himself (and is also writing a book about him), he was motivated to create the course because of his students.

During the pandemic lockdowns, over Zoom, they often spoke about Harry and all of them seemed to share the same interest in social issues.

Whether it was inclusivity at concerts, political issues, sustainability, it seemed Harry, who has 46 million followers on Instagram, was on their wavelength.

The university course will look at the cultural and popular development of the modern celebrity as it relates to questions of gender, sexuality, race, class, fan and internet culture

“During his first tour, a lot of his concerts gave to local charities that were in the towns and cities that he visited on tour, which is kind of unusual for a lot of musicians to give up some of their money to support local causes and the places that they’re visiting,” Professor Louie said.

“One of the ideas for the class is really trying to delve into the idea of celebrity and how do you use your platform to make change in the world today.

“For a lot of students, that’s a question that they’re constantly asking themselves as they get new followers or are sharing their lives or trying to make some sort of change.

“Since his rise to fame … a lot has changed. And so while most history classes don’t have the opportunity to really delve into the recent past, this class will give them an opportunity to explore things that they’ve lived through.”

As for Harry’s next move?

People reports he’s been dating director Olivia Wilde, 38, after meeting her on the set of psychological thriller Don’t Worry Darling (in theatres in September).

He’s also finished filming a 1950s love story set in Brighton, England called My Policeman, which is due for release this year.

Harry Styles’ solo Love on Tour 2022 continues in Spain and Portugal and he’ll arrive Down Under for six concerts starting in Perth in February next year.

From boy band darling to megastar, Harry Styles is now the subject of a world-first university course