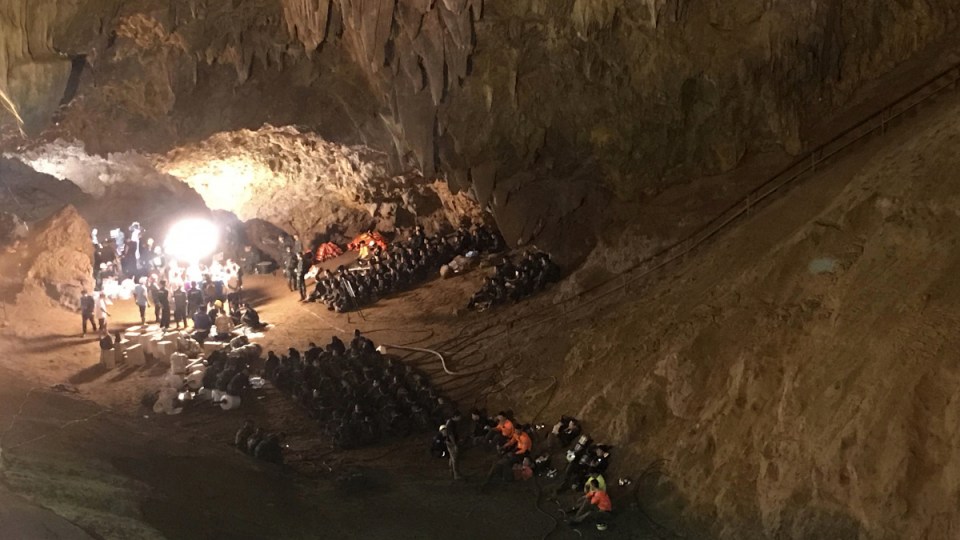 There have been multiple TV movies and documentaries, but when Hollywood gets involved, you're in for a big surprise. Photo: Craig Challen

Based on the true story of the Thai cave rescue mission that gripped the world, Thirteen Lives is possibly the most thrilling, action-packed adaptation so far.

Hollywood director, actor and screenwriter Ron Howard, 68, tells the story behind the mission to save the Wild Boar soccer team and their coach from a cave in Thailand, which he describes as a “miracle”.

Best known for his award-winning blockbusters based on real events, Howard said the incredible 2018 rescue – which captured the attention and the hearts of the world – was an almost impossible survival mission.

Speaking before the film’s global release on July 29 (and on Prime Video on August 5), he said “there were so many things that should have gone wrong”.

Howard, who has directed 27 films including the 1995 docu-drama film Apollo 13, A Beautiful Mind, Frost/Nixon and biographical sports drama Cinderella Man, said his movie was a “really powerful case study” in the anatomy of a miracle.

“The cave has the most extreme, terrifying gauntlet of passageways that no one could imagine any of these kids surviving,” Howard said.

“The Thai people really accomplished a miracle and this movie is a really powerful case study in the anatomy of that miracle.”

The Australian Defence Forces, including a six-person specialist federal police rescue team, AUSMAT rescuers and dive specialists, were among the 10,000-strong response from Thai authorities and international organisations.

He’s joined by Hollywood stars Viggo Mortensen and Colin Farrell, who play the two British civilian professional cave divers and who first found the boys beyond an area in the cave system known as ‘Pattaya Beach’.

“I have made a number of movies based on real events but this was one where I wanted to be as journalistic as I possibly could be, and one of the things I wanted to convey was that Thai people saved these boys,” explains Howard.

Edgerton (Obi-Wan Kenobi, The Green Knight, Boy Erased) said it was the “human spirit of collaboration and helping before asking questions that was really inspiring”.

Adds Mortensen: “This event felt like an almost impossible situation, a no-win situation.”

“As the world was watching, the Thai people represented so much strength and dignity,” says Farrell.

By now, the world knows the story of the evacuation and the survival of all 12 boys – aged between 11 and 16 –  and their 25-year-old coach, who entered the cave system in Chiang Rai province on June 23 and came out 18 days later.

A rescue operation led by the Royal Thai Army found the group on July 2. With thousands from Army Special operations units, Navy Seals, various other Thai government rescue organisations and the international responders, they spent another week figuring out the almost impossible survival mission.

On July 8, four children were sedated and evacuated, with the second round taking place on July 9.

The third and final round of evacuations was on July 10, where divers evacuated the remaining four children and their coach.

But it was Edgerton’s Dr Harry – who won Australian of the Year in 2019 – and his real-life dive partner Dr Craig Challen, who were instrumental in solving the problem of how to extract the team.

On the fourth anniversary of the rescue on July 10, AFP Specialist Response Group Leading Senior Constable Kel Boers recounted the real-life thriller, telling the ABC when he and his team arrived at the site, ‘‘it was chaotic’’.

‘‘I have never seen such a media scrum. A camp had been set up and there was literally thousands of people, their support staff, media, a lot of people from the local Thai community that had come up to cook food for people.

‘‘And when we finally nailed down the Thai Navy Commander, his comment was ‘I need you in the cave straight away’,’’ he said.

‘‘I mean, we’ve all done, in my team, penetration dives into shipwrecks or boat wrecks or aircraft and you have some experience, but going into a cave is an entirely different situation,’’ he said.

He described the water as ‘‘black, gross, dirty, silty’’.

‘‘You couldn’t see your hand in front of your face,’’ he said.

‘‘You immediately lose all direction and perspective of where you are because of it.

‘‘And the only thing we had to go by was a very small, thin tagline that had been tied from point to point.

‘‘You have to keep your hand on that as you’re moving through the cave, and if you let go of that you’re in a world of hurt,’’ he said, revealing his incredibly long shifts inside the cave.

Dr Harry played the crucial role of sedating the boys with ketamine, while Dr Challen assisted with medical checks, then they were dressed in scuba gear and carried out through the tunnels on a stretcher.

With Constable Boers located in the first section of the hours-long rescue of each boy, he didn’t know whether they made it out.

‘‘And you get out of the cave at the end of the night and found out that every boy that came out had been taken to hospital and was well and healthy – it was an amazing feeling.

‘‘I still held that something could go wrong right to the very end because it was just something that was so risky.’’

All of the children and their coach were successfully evacuated from the cave.

In 2018, the TV movie Operation Thai Cave Rescue was put together, followed by The Cave in 2019.

In 2021, National Geographic made a documentary film The Rescue.

But it’s Howard’s MGM blockbuster version that might just be up for multiple nominations during awards season.

According to Deadline in January, the film received the biggest “test scores in MGM history” with sample audiences, higher than any James Bond film and Oscar winner Rain Man.

In one dramatic scene, when the UK divers make it through to the beach area and shine a torch, Howard manages to capture the most emotional moment of the 2½-hour movie.

“Hey … how many of you?” calls out Mortensen, emerging from the dark, cavernous depths of the underground system.