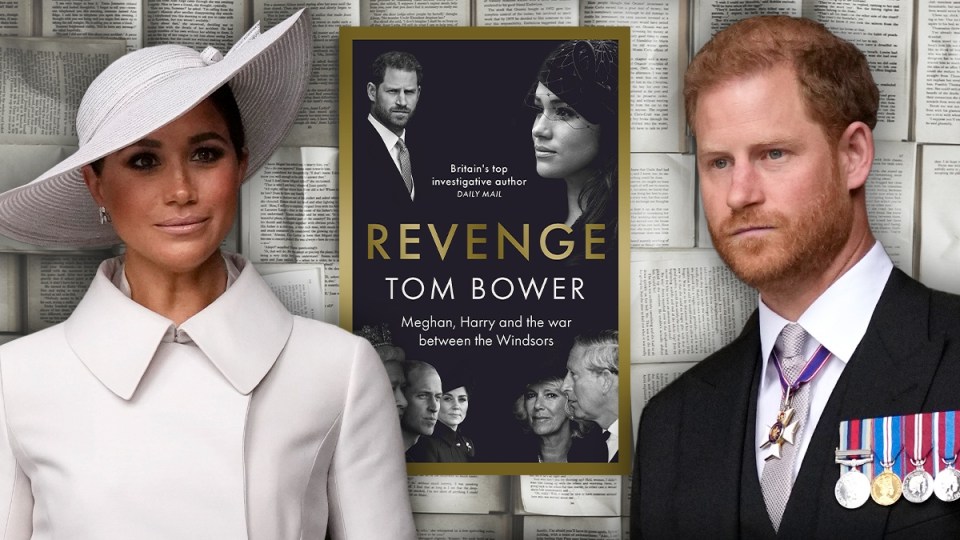 The explosive book by UK investigative journalist Tom Bower will set the cat among the royal pigeons. Photo: TND

Just days before the release of his bombshell book about the origins of Prince Harry and Meghan Markle’s relationship and their well-publicised war with the Windsors, author Tom Bower was on the front foot.

He spoke to the Chris Evans Breakfast Show with Sky in the UK to discuss his controversial new book.

Revenge: Meghan, Harry and the war between the Windsors, with several extracts already serialised in the Times and Sunday Times, is already making headlines and no doubt the PR machines of the royal household and the Sussexes are going into damage control.

The Sussexes did not co-operate for the book, and its official synopsis reads: ‘‘From courtroom dramas to courtier politics, using extensive research, expert sourcing and interviews from insiders who have never spoken before, this book uncovers an astonishing story of love, betrayal, secrets and revenge.’’

‘‘I choose to write about people who don’t want to be written about on the whole, and whose lives are shrouded in mystery,’’ Bower said in the July 18 interview.

‘‘And they want to hide their secrets.

‘‘I just love digging a way to find out what they don’t want us to know.’’

For a royal sequel to his Prince Charles biography, Bower became curious in 2017 when Meghan emerged as Prince Harry’s love interest, and wondered ‘‘how it was going to play out’’.

‘‘I spoke to very few friends of Meghan because she had put a ‘fatwa’ on anyone talking to me.

‘‘There were a few people who were sympathetic to her and I spoke to her father [Thomas Markle] who loves her still, very much, and he said, ‘In the end she is still my daughter’.

‘‘But, you can’t beat the real story. That’s the excitement of writing these sorts of books that in the end nothing beats the truth, the real facts,’’ he said.

Behind the 2017 Vanity Fair cover story

In his first extract published on July 15, Bower goes back to where the love story began for Harry and Meghan, revealing the circumstances surrounding the offer of a Vanity Fair cover story interview to the then Suits actor via her public relations agency, Sunshine Sachs.

He said, for her, the news was ‘‘electrifying’’, given so many Hollywood starlets’ desperation to get noticed.

There were a few conditions. She was told not to discuss her six-month relationship with Harry until the Queen had formally given approval for an engagement announcement.

It didn’t quite work out that way: Meghan couldn’t wait to spill to contributing editor Sam Kashner, who flew to her Toronto flat to do the interview without knowing who she was.

Meghan cooked lunch for him – her kitchen walls were covered in photos of herself, and she had picture guides and history books on London piled high on the coffee table.

Bower wrote: ‘Tell me about Harry’, said Kashner, not expecting an answer. ‘We’re a couple. We’re in love’, Meghan replied into the recording device.

When pre-publication copies were sent over to her agency and Buckingham Palace, with the headline ‘She’s Just Wild About Harry’, Bower said Meghan was ‘‘hysterical’’.

The cover was supposed to concentrate on the 100th Suits episode and her philanthropy, but fact-checking some of her claims proved difficult.

As Bower explained, Kashner said the future duchess complained about his story “because she wasn’t presented in the way she wanted”.

“She demanded that the media do what she expects. I felt manipulated.”

In Bower’s July 16 extract, he dissects the clashes with the royal household over ‘‘family, charity and protocol’’ and how it all ‘‘led, inevitably, to Megxit’’.

In one stinging account, as concerns mounted about her fractured relationship with her father and his criticisms of the royal family, Bower recounts how Prince Charles put it to his son: ‘‘Can’t she just go and see him and make this stop?’’

Meghan, though still wanting to please the royal hierarchy, felt it was unrealistic she fly to Mexico with the world’s media now watching her every move.

Bower describes how Camilla looked upon the self-important ‘‘adventuress from Los Angeles’’, how the Urban Dictionary coined the phrase ‘‘being Meghan Markled’’ and how Meghan announced she was pregnant at the wedding reception of Harry’s cousin Eugenie.

The remainder of this extract gives a hard-hitting timeline and analysis of how Meghan’s dream in Britain evolved into a nightmare banishment of sorts to isolation on Vancouver Island alone over Christmas in 2019.

‘Harry must be nuts’

Meghan fans defended her behaviour in Bower’s July 17 extract, where Harry takes her to Sandringham to go shooting with friends.

They were all old friends from Eton and had their wives and girlfriends with them.

Meghan reprimanded them, quite rightly, but his buddies thought she was ‘‘woke’’ and had put a dampener on good times.

Bower wrote: Driving home after Sunday lunch, the texts pinged between the cars: ‘OMG what about HER?’ said one; ‘Harry must be f—ing nuts’.

One defender responded via Twitter after the extract was published.

‘‘My respect for Meghan Markle grows with each hit piece that unintentionally reveals the utter deplorability of UK’s elite including the RF and its hangers-on,’’ she wrote.

‘Thank goodness Meghan is not coming’

According to Bower’s unnamed sources, the Queen is alleged to have said ‘‘Thank goodness Meghan is not coming’’ to the Duke of Edinburgh’s funeral on April 17 last year.

Bower suggests the Queen was relieved the Duchess of Sussex, then seven months pregnant, would not be attending her husband’s funeral.

The book states: ‘Thank goodness Meghan is not coming’, the monarch said in a clear voice to her trusted aides.

However, sources close to the Queen question whether she would have anything other than Philip on her mind on the day of the funeral.

Bower also claims the Duke of Sussex and Meghan made a ‘‘demand to appear with the Queen on Buckingham Palace’s balcony’’ during the Queen’s Platinum Jubilee celebrations in early June.

The book alleges that the Prince of Wales opposed this arrangement.

Clarence House also declined to comment on the book.

Bower writes: Festering was their (Harry’s and Meghan’s) fury that the palace had refused all of their demands for a prominent role at the Jubilee.

He adds: In Meghan’s view those optics were unsatisfactory, partly because her value to Netflix was to stand near the Queen.

Harry and Meghan did not respond to a request for comment.

Revenge: Meghan, Harry and the war between the Windsors, is on sale now and is available from online booksellers from August 2