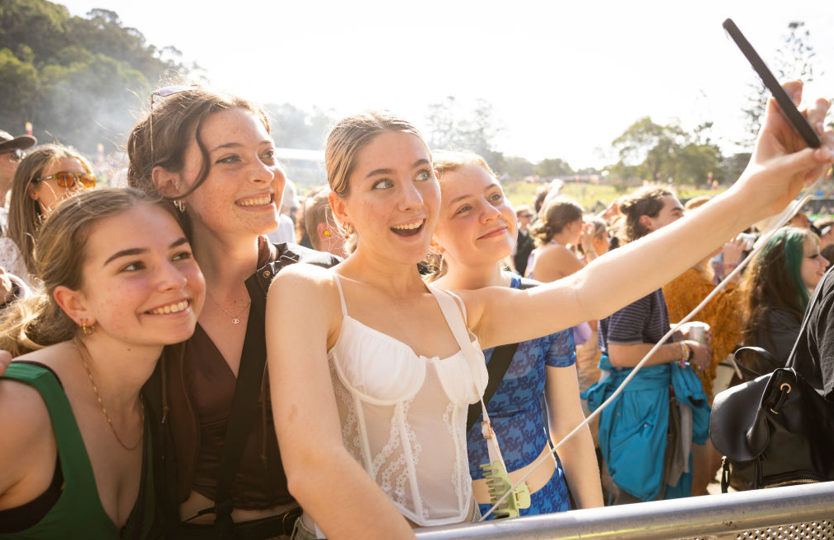 Splendour's first day was a rain-sodden writeoff, but the smiles, if not the sunshine, are back. Photo: Getty

The show must go on, but with one major and muddy concession as the party pushed on at one of Australia’s largest music festivals in Byron Bay.

Northern NSW copped a downpour as an east coast low swept along the coast on Friday, forcing Splendour in the Grass to cancel performances on the main stage.

Determined not to get bogged down in the muddy quagmire, the festival was up and running on Saturday with pleas to fans to make the most of the event.

And that’s exactly what they did.

Revellers and influencers at Splendour in the Grass ditched impractical and expensive designer gear in favour of the more traditional Aussie farming footwear – the gumboot.

“The ground is soft – so please wear your gumboots and rug up at night. We’re working hard to prepare the grounds around you so please be alert and allow our staff to get the work done.

“However don’t let it wash away your spirit! We have waited three long years for this and have worked so hard to bring you the show.

“Be patient, kind and safe.”

However, conditions began to ease as the system slowly moved southeast on Saturday afternoon, although hazardous surf warnings remain in place.

The severe weather warning for NSW was cancelled just after 2.30pm.

Southeast Queensland copped the full force of the system on Friday morning.

One man died after a car was washed away in floodwaters near Sandy Creek at Nanango, about two-and-a-half hours northwest of Brisbane.

Minor flooding warnings for Queensland remain in place for parts of the Kolan, Burnett, Mary and Stanley rivers.

Meanwhile, in NSW, flood warnings have been issued for the Darling, Bogan, Lachlan and Macquarie systems.