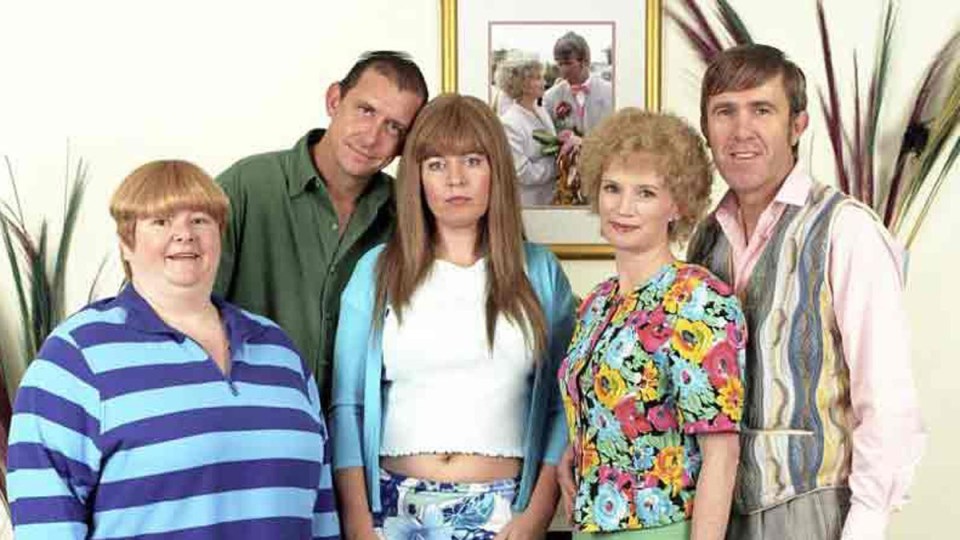 Can I run something up your flagpole? Kath & Kim might be back for a 20th anniversary special. Photo: ABC

Twenty years ago, when the first episode of mockumentary-style sitcom series Kath & Kim aired on the national broadcaster, there was a lot of new language, outfits and suburban folklore to absorb.

It was May 2002, and the classic episode was called Sex.

We learnt to say Cardonnay and “Look at moi”, speak like Prue and Sue and call ourselves foxy morons, and let’s not forget “I have a feeling in my waters”, loving dancing out of rhythm and men proposing to their girlfriends in Harvey Norman stores everywhere.

Written by Melbourne comedians and actors Jane Turner and Gina Riley, who play mother (Kath Day) and daughter (Kim) respectively in the fictional outer suburb of Fountain Lakes, the show went on to make history for the ABC and later for the Seven Network.

In only four seasons and a total of 32 episodes (plus a telemovie and a theatrical film), the show – with influences from reality TV hit Sylvania Waters and iconic Aussie classic Muriel’s Wedding – managed to attract audiences in their millions, multiple awards and careers for the cast.

The series synopsis goes like this: “Kath Day is enjoying life as an empty-nester and has a new man in her life, gourmet sausage maker Kel Knight (Glenn Robbins)”.

“She’s none too happy when her lazy, self-involved daughter Kim moves back home after problems in her marriage to Brett Craig (Peter Rowsthorn), a computer salesman at Fountain Gate, Kath and Kim’s local shopping complex and favourite haunt.

And now, just like a Friends reunion or a Hey, Hey special, the famous five are back together for a 20th-anniversary, one-off episode, set to air later this year.

TV Tonight reported on Wednesday Riley, Turner and Szubanski “are understood to be filming at NEP Studios in South Melbourne under a shroud of secrecy” with Robbins and Rowsthorn no doubt “in on the action”.

While we’re far from finding out what the cast are doing inside the NEP studios, we can safely assume they’ll be wearing the outfits that inspired our choices for fancy-dress parties.

Think Kath’s second-hand op-shop clothes and Jane Fonda G-string exercise leotards, and Kim’s ghastly fashion trends based on her obsession with the weekly women’s gossip magazines such as New Idea and Women’s Day.

Kel’s shorty shorts for race walking, Sharon’s netball tunics, they might bring back the blue Holden Barina and the excellent homeware choices from inside their since-demolished suburban home in the fictitious suburb of Fountain Lakes.

Combovers and perms will make a comeback. The production crews will have a field day.

In the first-ever Sex episode, the plotline is gloriously simple.

Kimmy moves back home, insisting her marriage to Bretty is over. Kim begins to suspect Brett is having an affair and has Sharon stalk him. Kim turns her nose up at her mother’s choice of boyfriend. And then Kel proposes to Kath at Harvey Norman.

Perhaps the storyline will kick off where the last episode ended in October 2007.

Or it might focus on the cast sitting around reminiscing and bring in stars who made guest appearances all those years ago, like Eric Bana, Donna Hay and The Wiggles.

Called The Wedding of the Century, Sharon got married to Wayne, played by the late Test cricketer Shane Warne, and Kath and Kel turned their home into an Airbnb, and Kim owed $90,000 in overdue DVD fines.

On Thursday, TV Tonight reported Seven’s Sonia Kruger and comedian and actor Celia Pacquola (Rosehaven) were among “a parade of celebrities filming this week”.

But, “paparazzi are yet to catch any as they exit the building into black SUVs waiting outside”.

TV Tonight said producers got hold of interior photos of the Day-Knight Patterson Lakes home before it was demolished, “for green screen use in the 20th anniversary special”.

Industry sources suggested there will be a “hefty price tag associated with the project, which could also be sold to British television” as an Australian broadcaster has not yet been confirmed, although Seven is “mooted as the front runner”.

And just in case you need a little trip down memory lane to get you back in a Kath & Kim mood, here’s some classic moments.