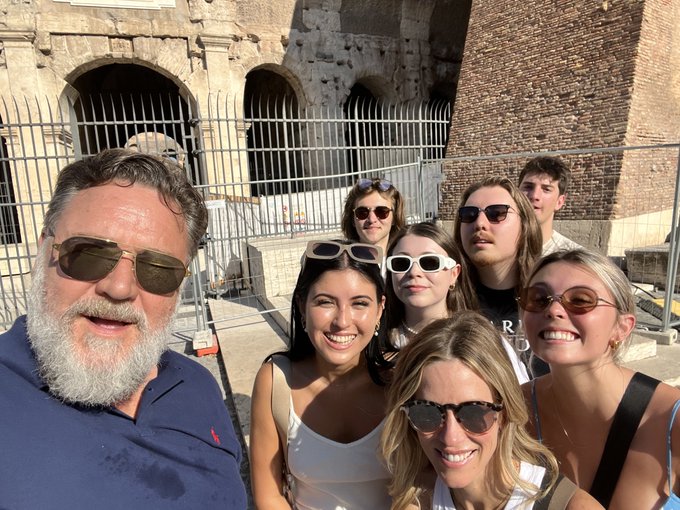 Russell Crowe, with his family at the Colosseum in Rome, posted photos of his private tour of the Sistine Chapel, which is forbidden. Photo: Twitter/Russell Crowe

Actor Russell Crowe has had a busy, and emotional week, taking his family on a Roman holiday to the city where he famously fought lions and slaves at the Colosseum in his 2000 Oscar-winning film Gladiator.

Crowe and the two sons he shares with his ex-wife Danielle Spencer, Charles, 18, and Tennyson, 16, posed with friends for a selfie outside the historic amphitheatre, built in 70 AD.

“Taking the kids to see my old office,” he wrote, reflecting on his performance as Maximus Decimus Meridius, which won him the 2001 best actor Oscar.

In another post inside the Colosseum, where the Roman emperors would watch gruesome deathly gladiator fights, on Tuesday, Crowe turned to his Italian to caption the four photos:

“What we do in life, echoes in eternity”.

And it seemed there were no better words to live by, as his Roman holiday took on a very heartwarming tone – documented through social media posts.

On Tuesday, Crowe took his family to the Vatican Museum to remember his late father, John, who died aged 85 last year.

“A very special experience as a family yesterday. Got to walk through the Vatican Museum by ourselves,” he wrote.

“My mum had walked these corridors with my father 20-plus years ago with the thousands of tourist that flock here daily and make it the third most popular museum globally.

“This time, with arrangements in place, we pushed her in a wheelchair down those same corridors. No tourist crowd, just us.

“My dad passed in 2021, but of course every fascinating corridor has its memories for her, directly associated to him.

“We were given access to rooms, perspectives and parts of the collection you don’t get to see as a regular tourist.

Crowe, 58, described how the group “squeezed into a tiny private elevator and ascended to a balcony few get to see”. His mother Jocelyn held his hand and said: “I wish your father was here”.

“We stepped on to the balcony, a majestic sweeping view of Rome,” he wrote.

“From somewhere in the Vatican we could hear the Swiss Guard band rehearsing. The music floated up to us.

“It took me a few moments to realise they were playing Danny Boy, one of the songs we played at his funeral.

“Of all songs, of all times… how? I looked at my mum, she looked at me. My father’s presence overwhelmed us both. She had a little cry and I kissed her on the head. He was with her.

“If you’re lucky enough to have your parents around, look after them. Call, visit, show them love.”

Unlike other celebrities enjoying a midyear holiday on yachts in the Mediterranean, including fellow actor Leonardo diCaprio and tech billionaire Elon Musk, Crowe basked in the “special privilege” of continuing his cultural ancient Roman holiday.

The Zeus star of Thor: Love and Thunder visited Michelangelo’s 15th century Sistine Chapel, art galleries and one of his “favourite places in the world”, the 18th century Trevi fountain.