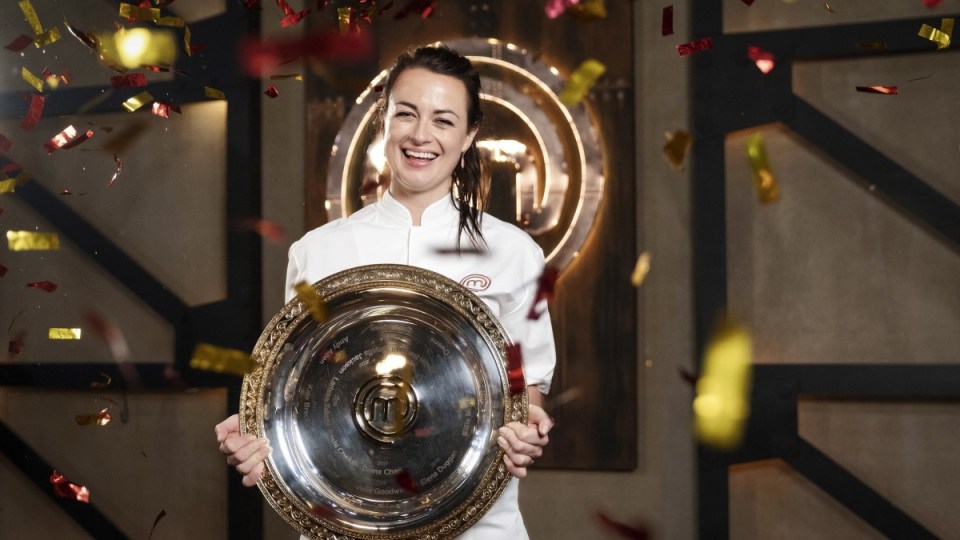 A small piece of television history was made this week, with three free-to-air reality TV shows reaching their grand final playoffs, and their winners all sharing a weird, yet wonderful, coincidence.

The former fish and chips shop manager from Tasmania famously won BB back in 2003.

And just 24 hours before that, Zak Stolz, 23, was the back-to-back winner over on Nine’s Ninja Warrior on Monday night, swinging away with $100,000.

The New Daily caught up with McKay after her big win.

She was thrilled to have been part of TV history, not only as the first cook ever to win MasterChef Australia twice in its 13-year history, but also for sharing the honour with other return winners from rival TV shows.

“It doesn’t feel quite real at the moment. I cannot believe I did it again. It’s wild,” McKay said.

McKay remembers Bird winning all those years ago, adding “it’s a bit of history-making and it’s pretty cool to be part of it”.

The moment McKay thought it was all over

All up, McKay, who shares daughter Ada, 2, with husband Haydn Suridge, 34, spent about six months away from her family.

They were allowed to catch up every few weeks in Melbourne, but she said it felt like months between visits and it was “hard”.

She reflects on getting that call from Ten, inviting her back to try and win the big prize again, seven years later.

“As soon as I got that phone call and the question was asked, I had this overwhelming feeling that I should say yes. I didn’t say yes straight away, I slept on it, but woke up the next day with the same feeling.

“I was a new mum for the first time, losing a bit of myself along the way and not cooking as much as I wanted, sacrificing those things you love doing to be a mum.

“It came at a perfect time and gave me back that joy of cooking.”

Out of the entire 14th series, her devastating low point may have been on Tuesday night, after chef and judge Jock Zonfrillo plated up her runny sweet and savoury dish.

“In the finale, when I got low scores for the panna cotta, there was a moment where I thought it was all over, there was no way I was going to win. I had to push that aside and keep going.”

Despite half the cooks in this series coming into the kitchen without previous experience of what it’s like to cook on a reality TV show, McKay said it was very much a level playing field.

“The high was self-realisation that I am doing what I am meant to be doing. I really enjoyed myself and, I think, that combination of making great new friends, cooking well, finding a style I didn’t really have before.

“A new discovery of who I am made it a really good time.”

“I’ll use the money to go towards a restaurant, have a holiday and a bit of a rest.”

Greatest housemate of all time!

Now a resident of Queensland, she’s got the title of greatest housemate of all time, becoming the first to win Big Brother twice anywhere in the world.

After Bird’s win almost 20 years ago, it wasn’t all plain sailing.

“I think everyone fell in love with me because I was a little Aussie battler, and I related to a lot of people,” Who magazine reported in May.

Bird continued to endure battles, including going through a divorce, moving to Sydney, spending a lot of her winnings on rent and losing even more after being a victim of fraud and losing $40,000.

Her son Lucas suffers from cystic fibrosis and needs daily care, while Bird has had her own health issues, having been diagnosed with a deteriorating eye condition and vision loss.

When asked on Tuesday night what she’ll do with the prize money, she replied: “I’m gonna use that money to put a roof over our heads.”

Last year’s champion and fan favourite, Zak Stolz, once again walked away with $100,000 after going the furthest and being the fastest competitor in the sixth season of Nine’s Australian Ninja Warrior on Monday night.

Stolz, who also made history as Australia’s first back-to-back winner on the show, said: “To be able to hold up another season title would have to be the crowning achievement of my Ninja Warrior career.”

The reality TV competition began with 150 ninjas and Stolz was among five remaining for the finale.

He fell short of conquering a section of the course known as Mt Midoriyama, but successfully went one obstacle better than the rest.

“Anyone who goes that deep into the course could have won the entire series. It really goes to show how cut-throat Ninja Warrior truly is, with years of training culminating in a single two- to three-minute performance.

“Maybe some season down the track I’ll be able to live out the dream of climbing the mountain again.”