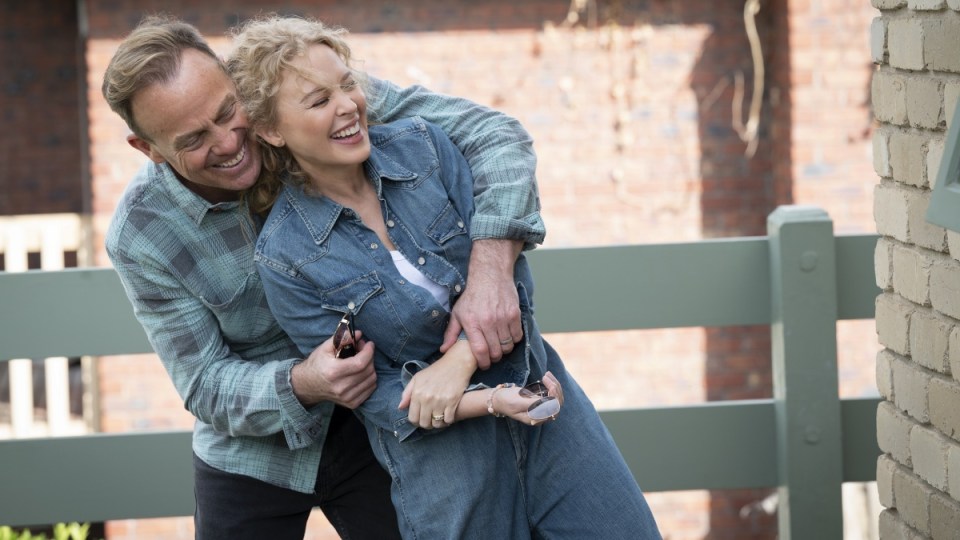 Kylie Minogue and Jason Donovan back one last time on the show that launched the career of many actors, singers and writers. Photo: Ten

Australian pop icon Kylie Minogue has reunited with her Neighbours on-screen husband Jason Donovan to film the final episode of the TV series that captured the hearts of audiences around the world.

In the first on-set images of the 54-year-olds, who have remained friends while pursuing their separate stage and screen careers, the pair transformed back into their Neighbours characters, Charlene and Scott Robinson, at Melbourne’s Nunawading studios last month.

Leaning on a green car and wearing denim overalls (mechanic Charlene wore them all the time) in the Melbourne residential cul-de-sac known as Ramsay Street, the pair fondly embraced and laughed as Donovan planted a kiss on Minogue.

According to a statement from Ten, the finale will come at the end of a final week of Neighbours episodes, each spanning 90 minutes, which kicks off on July 25.

The “gripping and emotional 90-minute finale” of TV’s longest-running soapie will be broadcast on July 28 at 7.30pm.

Minogue released the first-look photos on her social media accounts on Monday afternoon, saying “Now we’re back together”, while Donovan added a similar sentiment on Twitter: “So good to be back with this absolute legend.”

So what happened 35 years ago?

According to the National Film and Sound Archive (NFSA), the 1987 wedding between Scott and Charlene was one of Australian television history’s biggest moments.

Two million Australians and almost 20 million viewers in Britain tuned in to ‘Episode 523 of Neighbours’ for the wedding of Scott and Charlene.

She left a year later to pursue a singing career, and Donovan left in 1989.

Her debut single Locomotion was released less than a month after this episode aired on July 28, and the stage was set for her rise to international stardom.

“Legend has it that Kylie herself chose the unlikely soundtrack – pub rocker Angry Anderson performing the ballad Suddenly. The crashing drumbeats and raw vocal track underscore the emotion of the scene in the most 1980s way possible.”

The NFSA’s Beth Taylor observed it “was clear the show’s producers were aware that this scene would become a part of Australian television history and gave it the attention it deserved”.

“The scene revolves around the pair’s palpable chemistry … the episode’s director Rod Hardy put it down to their budding behind-the-scenes romance.

“The clip … transports us back in time. Along with the soundtrack, Kylie’s lacy OTT wedding dress, the puffy coral-coloured bridesmaids’ dresses and Jason’s mullet haircut all combine to make this a key Australian ’80s cultural moment.”

Many people in Australia and the UK still remember watching it.

In case you forgot, here it is. Grab tissues.

Plotline is a  secret

There are few hints – significant to some – in the latest photos for the final week, including a ‘For Sale’ sign in one of the houses behind a shot of Minogue and Donovan, a green Mini with the hatch open (she had a yellow one back in the day), with the pair both wearing wedding rings.

Does this mean they’ve reunited, bought into the family clans and are moving home?

The Sydney Morning Herald was invited on set for the final shows, and while plot scenes were a closely guarded secret, the masthead reported “the pair’s involvement in the finale was kept under wraps even from the cast and crew”.

“According to one source close to the production, news of their visit broke only hours before they turned up to film a handful of scenes.

“Within a couple of hours, they were gone,” the SMH wrote.

A breeding ground no more

Neighbours launched the careers of Minogue – who went on to sell 80 million records worldwide and become our biggest musical export, and Donovan – who nurtured a steady musical and stage career including the lead role in the UK production of Joseph and the Amazing Technicolor Dreamcoat.

When Channel 5 in the UK announced in February it would not renew its contract with Fremantle Media, many voiced their concerns one of Australia’s cultural icons would be lost.

“Neighbours achieved longevity in a changing and cut-throat world of free-to-air broadcast and has given a start, training and long-term employment to many writers, directors, producers, actors and crew over 37 years,” wrote former screenwriter for the show Philippa Burn in The Conversation.

She said screenwriters called it ‘Neighbours University’: “They say you have to do 10,000 hours to become an expert in anything, and I easily clocked those hours story-lining, script editing and writing”.

So it’s all coming to an end after nearly 37 years and 9000 episodes, and it’s the remaining fans of the show who reacted immediately to the finale-week images.

Some noted Charlene was wearing similar dungarees to those in her first appearance, while others observed her youth appearance and blonde curly locks still resonated.

More importantly, another said: “The viewing figures are going to go crazy.”