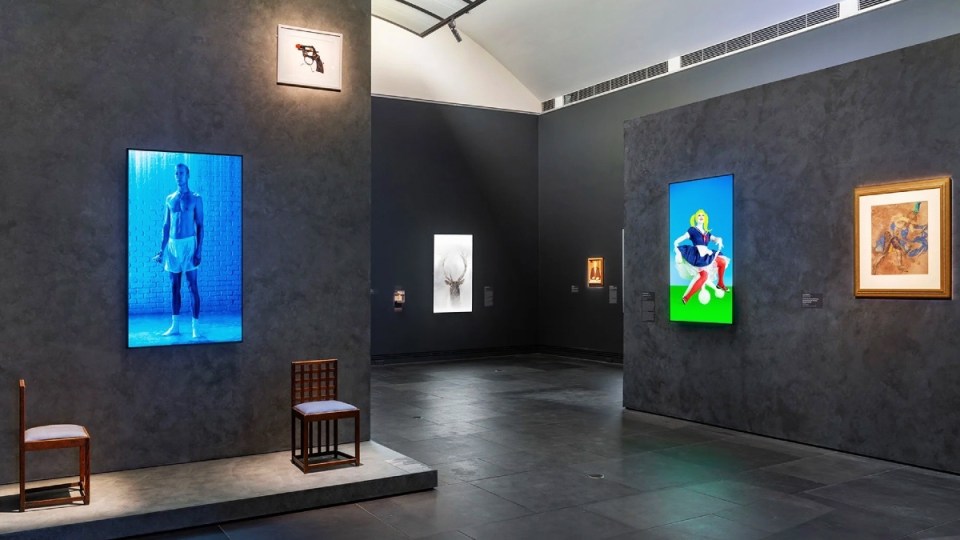 Did her eyes briefly move? Perhaps it was a trick of the light. Then suddenly the actor’s face and upper body come alive with rapid-fire movements like a puppet on a string.

“This is one of the glitchiest works,” Art Gallery of SA director Rhana Devenport says of the Rossellini video portrait, one of 23 on show in the Robert Wilson: Moving Portraits exhibition opening at the gallery this weekend.

“Normally there is this tremendous sense of stillness [in Wilson’s portraits]. He has often said ‘still time is real time’, and this is a hallmark of his theatrical work, but in this case she not only looks like this very well-known Japanese anime figure [Sailor Moon], she’s also glitching.”

Robert Wilson: Moving Portraits ­– which is showing exclusively at AGSA alongside the national touring exhibition Archie 100: A Century of the Archibald Prize ­– has been curated by Devenport, a long-time fan of the work of the influential New York theatre director and visual artist.

She recalls seeing Wilson’s opera Einstein on the Beach (created in collaboration with composer Philip Glass) in Melbourne in the 1990s.

“It blew my mind. Then 10 years ago, I saw a solo show of the video portraits, the VOOM portraits in particular, which were a body of work from 2004, in Singapore. And I thought, wow, it would be really great to show those works in this part of the world … I started having a serious conversation with him a few years ago and finally it’s come to fruition. So for me, it’s a bit of a dream come true.”

The works blur time-based cinematography with the “frozen moment” of still photography, with each incorporating elements found in film and theatre design: Lighting, choreography, make-up, costumes, set and sound.

The videos are just a few minutes long and play on a loop, so at first glance, the portraits may appear static.

As Devenport explains in an essay accompanying the exhibition, “they are experienced as moving pictures, hovering between action and stasis, both still videos and moving stills”.

For Robert Wilson: Moving Portraits, Devenport has chosen a selection of works that illustrate the depth and breadth of Wilson’s collection, which references aspects of pop culture as well as historical artworks.

In one Hitchcock-inspired portrait, Brad Pitt stands – clad only in white boxer shorts and socks – against a brick wall holding a gun; after being drenched by rain, he slowly raises his arm and shoots directly at the viewer, revealing that his weapon is only a water pistol. Never once does the actor avert his gaze from us.

Another room includes a portrait of Robert Downey Jr lying semi-naked on a stone slab with the muscles exposed in his raised left arm; he appears to be being operated on by a disembodied hand.

Bathed in a greenish light, with Downey Jr’s chest gently rising and falling, this work has a Frankenstein-like feel, but in fact references Rembrandt’s 1632 painting The Anatomy Lesson of Dr Nicolaes Tulp.

Lady Gaga maintained the same position for seven hours for her re-enactment of French Neoclassical artist Jean-Auguste-Dominique Ingres’s painting of Mademoiselle Caroline Rivière, the daughter of a Napoleonic court official.

“She [Caroline] was about 12 or 13 and she sadly passed away a year later, so it’s very poignant, I think, and very much referencing the brevity of life,” Devenport says of the Wilson portrait.

“A single tear rolls down her face, she blinks her eye once and a snow goose flies across in this gorgeous kind of recreation of that painting. You can tell the level of love he has for art history.”

Wilson’s video portraits are multi-layered, invariably capturing something of the story or personality of the sitter.

In his elegant monochromatic portrait of Princess Caroline of Monaco, she adopts a pose her mother, Grace Kelly, struck in the Hitchcock thriller Rear Window.

Devenport explains that the portrait of Chinese contemporary artist Zhang Huan – in which he stands still while butterflies flutter around his face and upper torso – relates to a performance work Huan did in 1994 called 12 Square Metres in which he smeared his naked body in fish oil and honey to attract flies.

“It was this really potent statement about abjectness and defiance and it achieved a lot of attention in the West… so this is an elegiac and very exquisite homage to that piece.”

For the AGSA exhibition, Wilson’s portraits have been grouped under eight themes: The Long Shadow of Happy Days, Nocturnes, Soul Mountain, Characters & Archetypes, The Sacred Covenant, Gods of Our Time, The Averted Gaze and Past Lives.

Adding another layer of interest and complexity to the display, Devenport and the gallery team have selected rarely seen works and new acquisitions from AGSA’s collection to complement each video portrait.

Alongside the Gaga portrait, for example, is a painting by French artist Louise-Adéone Drölling: It is from the same era as the Caroline Rivière portrait, and the subjects wear similar dresses. On an adjacent wall is a Balsarium (an ancient Roman glass vessel used for collecting tears) and a sculpture by contemporary artist Timothy Horn featuring tear-shaped blown glass.

It is displayed in Gallery 12, outside the exhibition proper, to act as a kind of lure to draw people in to discover the rest of the moving portraits.

Other gallery works acting as “thematic touchstones” range from a marble sculpture of Aphrodite (displayed near the video portrait of dancer Mikhail Baryshnikov in front of a Greek Corinthian column, which itself references Renaissance painter Andrea Mantegna’s paintings of St Sebastian) and a garment by designers Romance Was Born that is fashioned from a French tapestry and embroidered with Australian birds (displayed near the Wilson video portrait WOUTER Bird On Hand).

While Wilson’s video portraits of celebrities may grab the most attention, his works capturing non-human subjects have their own animal magnetism. Among them are Ivory: Black Panther, displayed near a taxidermy puma from AGSA’s collection, and BORIS, Porcupine, who stands in front of a starry backdrop and is accompanied by a soundtrack playing Bicycle Built for Two (referenced in 2001: A Space Odyssey).

In one of the most ethereal portraits, a majestic elk shrouded in mist exudes a quiet dignity as he looks out at visitors, each of his ears moving softly before he finally averts his gaze. Devenport says it draws on Wilson’s experience as a young boy in Texas, when he was forced to go deer hunting with his father.

“He was very disturbed by the whole process of killing but at the same time what he loved was the fact he could be in a hide and observe animals … there’s the idea of the gaze, and the holding of the gaze between human and animal … it is like a sacred covenant.”

According to the producer of Wilson’s Video Portraits series, Chris Green, who is here for the exhibition opening, each portrait takes a day to shoot, with a further two weeks required for the post-production editing process.

There is much to absorb in the works, and visitors will reap rewards if they take the time to fully appreciate each one.

“It’s about asking us to slow down ­– the sense of stillness, of time, of consideration,” Devenport says.

She adds: “It’s easy to say it’s all about celebrity, but I don’t think it is at all. These are like love poems to other artists, whether they be writers or actors.”

Or, indeed, a dungarees-wearing auto mechanic named Norman Paul Fleming, who was working on the set of another shoot and co-opted by Wilson as a subject because he thought he had an interesting face.

“That’s why I really wanted that one in,” Devenport says. “I didn’t want it to be just about Brad and Gaga because there’s so much more going on.”

Robert Wilson: Moving Portraits is at AGSA until October 3. Running concurrently is Archie 100: A Century of the Archibald Prize, which will travel nationally.

This article first appeared in InDaily. Read the original here.