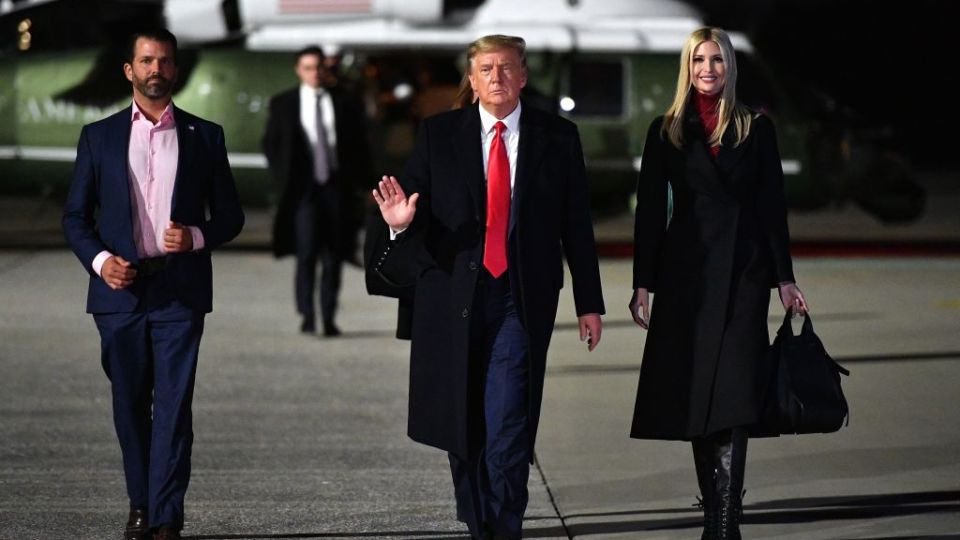 Snippets from a three-part explosive docu-series on the Trumps have been released before the next public hearing into the January 6 attacks on the Capitol.

The hearing is investigating Donald Trump’s efforts to overturn the US presidential election.

Unprecedented, by British filmmaker Alex Holder, was given extraordinary access to the ‘‘world’s most controversial family’’ in the final weeks of the 2020 presidential campaign.

Award-winning Holder took to Twitter on July 7 and confirmed Unprecedented – ‘‘twice subpoenaed’’ by the Select committee – has been snapped up by Discovery+ and is slated for streaming on July 10.

A Discovery spokesperson confirmed the series will stream on Foxtel in Australia on July 11.

He testified behind closed doors before the January 6 Select Committee on June 23, and said he fully co-operated with the investigation.

In a statement provided to The New Daily, Discovery+ in the US said the documentary features ‘‘never-before-seen footage of the Donald J Trump family and their reactions to the outcome of the election’’.

“[It] reveals unfiltered sit-down interviews with President Trump and his family, including his daughter Ivanka Trump and son-in-law Jared Kushner, sons Donald Trump Jnr and Eric Trump, as well as insights from the journalists who covered the events as they unfolded,” Discovery said.

“With unparalleled access, including the last interview President Trump gave during his time at the White House, Unprecedented presents a timely look at recent history.”

‘I had no agenda’

In a statement released on June 24, Holder said he could never have predicted that his work would one day be subpoenaed by Congress.

“As a British filmmaker, I had no agenda coming into this,” he said.

“We simply wanted to better understand who the Trumps were and what motivated them to hold onto power so desperately.”

Three short trailers on Discovery’s YouTube channel offer just a glimpse of the hours of footage turned over to the House committee.

The first shows interviews with Mr Trump and his adult children, as well as vision of the campaign rallies and the march on the Capitol on January 6.

“This is a fraud on the American public,” Mr Trump tells a crowd of supporters after the election.

“I think I treat people well, unless they don’t treat me well, in which case you go to war,” he says in an interview.

In the trailer, Ivanka says Trump has “taught Republicans that it’s OK to fight back”.

On July 5, after seeing an earlier trailer obtained exclusively by Politico, Vanity Fair said: “We … know that the footage will provide an up-close look at the Trumps in the exact manner we’ve come to expect: Vapid, unhinged, and in potentially compromising positions that will come back to haunt them.”

Politico’s trailer begins with Mr Trump sitting down and facing the camera, before cutting to Ivanka Trump who was concerned about stomach-level crease lines in her green voluminous-sleeved dress.

She jokes about covering the seam by holding her make-up artist’s pet dog on her lap: “Can I borrow your dog?” she jokingly asked.

The second trailer is where Vice President Mike Pence is called upon to invoke the 25th amendment to remove Mr Trump from office.

There’s footage taken inside the White House, at Donald Trump’s Palm Beach club Mar-a-Lago, behind the scenes, and before and after the January 6 riot.

In the third trailer, Holder asks Mr Trump: ‘‘Can we talk for a minute about January 6?’’

“It was a sad day, but it was a day where there was great anger in this country,” he says.

The Politico trailer finishes with the voice of Mr Trump asking the crowd ‘‘Do you miss me yet?’’, the third official YouTube trailer includes a few observations from him.

A year after the riot, US TV network ABC reported that up to 10,000 angry pro-Trump supporters stormed the Capitol on January 6, and 2000 made it inside the building.

There were 700 arrests, with more than 165 later pleading guilty and more than 70 sentenced.

Four people died on the day of the attack, with one fatally shot by police and the others dying of natural causes.

More than 100 police officers were injured, and one died the next day.

‘‘A very small portion went down to the Capitol,’’ Mr Trump tells Holder.

The release of the trailers comes amid growing speculation that Mr Trump has been confiding in ‘‘allies and aides’’ that he is ‘‘seriously considering announcing a 2024 presidential run as early as this summer’’, CBS News reported.

‘‘No final decision has been made on whether to run and, if so, when to launch such a bid, according to three people close to Trump who requested anonymity in order to share details on private conversations,’’ the network reported.

Public hearings by the House committee will resume on July 12.

The New York Times said the panel plans to use what is likely to be the second-last session to ‘‘reveal its findings about the connections between President Donald J Trump’s effort to overturn the 2020 election and the domestic violent extremist groups’’ including the Proud Boys  that helped organise the siege.

“The hearing is expected to chart the rise of the domestic extremist groups that attacked the Capitol and how Mr Trump amassed and inspired the mob,” NYT reported.

“The committee also plans to detail known links and conversations between political actors close to Mr Trump and extremists.”