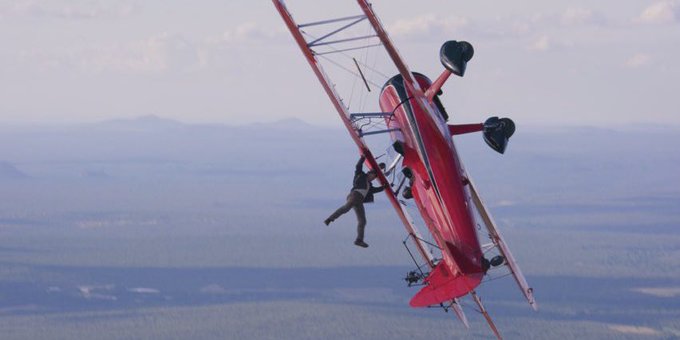 Hot off the heels of his press tour and worldwide release of Top Gun: Maverick and celebrating his 60th birthday, a stunning aerial display by Tom Cruise from his next film has been released.

Mission: Impossible 7 director Christopher McQuarrie posted a still to Twitter on July 4 to wish his courageous colleague who does most of his own stunts, a happy 60th birthday.

Cruise can be seen outside the cockpit of a red, vintage WW11 biplane, dangling himself off the wing as the plane does a nose-dive and barrel roll.

Cruise has played undercover CIA agent Ethan Hunt in the iconic Mission Impossible series for nearly 30 years and is showing no signs of recruiting stunt teams for the big scenes.

McQuarrie has worked with Cruise on 10 films, including four MI films,

Cruise has been performing some of his own thrilling action sequences in all the MI movies, none more impressive than hanging upside down on cables when his character breaks into the CIA’s most impenetrable vault in the first film in 1996.

In subsequent MI films, he’s driven through sandstorms in the desert, jumped out of high rise apartment buildings, dangled from a 2000-metre cliff in Utah, has been thrown from trains and helicopters, and was submerged in a crashed car after a failed bombing attempt in Ghost Protocol.

His accidents and mishaps are few and far between, and a broken ankle in Mission: Impossible Fallout in 2018 was a minor distraction for a few weeks.

At a recent Cannes Film Festival Masterclass Conversation with Cruise on May 28, he spoke passionately about making movies, working with extraordinary crews, editors and producers and “pushing the art form”.

“How can I immerse an audience into a movie … with action … how can I entertain them?

“My whole life I’ve wanted to parachute and jump and these are the skills I’ve developed over time. I’m an aerobatic pilot, I speed fly, fly helicopters and I take dancing and singing lessons.

In MI 7, Cruise jumps off a cliff on a motorbike, and parachutes.

He admits he’s scared: “[But], how do we thrill an audience … I held onto dreams and I think, yes, this is possible.”

The New Yorker reported Cruise was asked a version of this question at Cannes: “You have kids, you have a company … Why do you do it?.

“Cruise was ready with a response destined to go down in Tom Cruise history: “No one asked Gene Kelly, ‘Why do you dance?’, wrote TNY.

Up, up and away! Tom Cruise goes from Maverick to Mission Impossible with death defying stunts