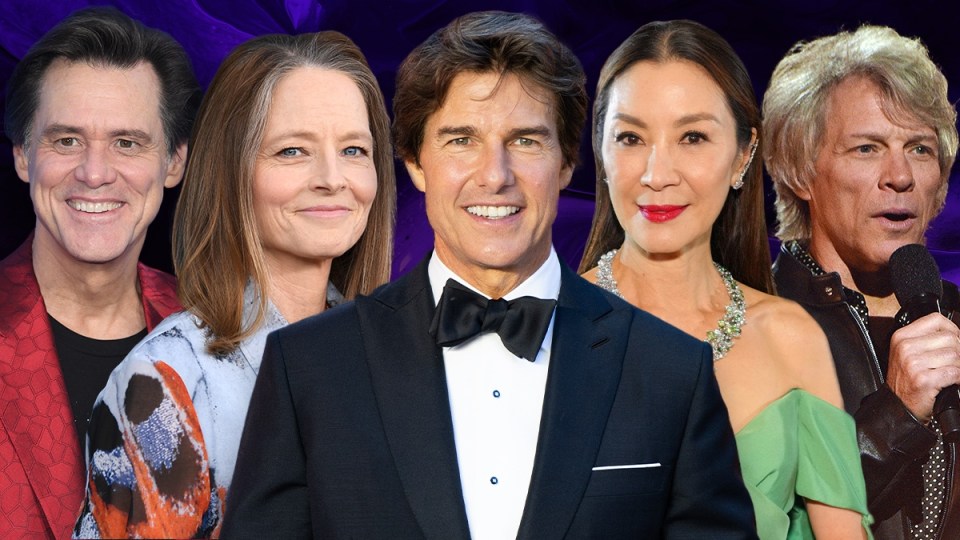 Meet the celebrities having the time of their lives. Photo: TND

Not that long ago, Tom Cruise was sliding across a lounge room floor in his underpants to the tune of a Bob Seger classic in the film that catapulted his career from fresh-faced boy next door to Hollywood royalty.

Fast forward almost 40 years, and Cruise is the latest to join an elite assemblage of stars who are turning or who are already 60 this year.

Cruise’s big day was July 3, and unlike ordinary folk who hit the big 6-0, he’s not catching up with kids or grandkids, having a few beers at thebowls club or contemplating retirement.

He was celebrating Top Gun: Maverick‘s $1 billion in box office receipts, catching up in pit lane at the British Formula One Grand Prix at Silverstone with Lewis Hamilton, and dancing the night away at an Adele concert.

He’s not the only Hollywood star celebrating that milestone this year. So what does it mean for celebrities who turn 60?

Does Cruise’s superstar status give us hope that 60 is the new 40? Can you still land the lead role when you’re 60 and is Hollywood embracing our celebrity sexagenarians and writing and developing roles for them?

Or does it signal – for 90 per cent of those in front of the camera – a downward spiral into being cast in smaller roles and overlooked for much younger talent?

“For Cruise, he is involved in what is termed the ‘Peter Pan’ syndrome – he doesn’t seem to age, refuses to age, and the star vehicles he takes on emphasise his masculinity, his eternal youthfulness.

“Nonetheless, like all mortals, Cruise is ageing and one day he will have gotten older. What will be fascinating is how he deals with it. One hint in Maverick is the way he becomes teacher/mentor to the next generation of fighter pilots (although it is him, as Maverick, that saves the day …).

Professor Redmond says the present generation of 60-plus male stars such as Cruise do still tend to lead films, as “they have a wide fan base and so their films are still profitable and marketable”.

However, “for female stars, the terrain is much more uneven, unequal. The roles they get are often limited and stereotyped”.

“I think it is much easier to age in music – if the quality of the music and performance continues, then you can rock well into your 80s (Paul McCartney’s gig at Glastonbury is a case in point).

“In film and television, there is ageism, and Hollywood clearly lives by the light of young people.

“One way to gauge this is list the top 20 actresses of today and see what their ages are and what roles they might play. You can see that mothering roles become more significant as actresses age.

“Nonetheless, things are slowly shifting: If you think of actors like Sandra Bullock, they have maintained their Hollywood stardom –although again, is this because they have also remained ‘youthful’ looking?” Professor Redmond asks.

But, by all accounts, our celebrities turning 60 this year are doing just fine. They’re not slowing down – quite the opposite, and making the most of every moment.

Social media laughed for 24 hours when box office master Carrey (The Mask, Dumb and Dumber, The Truman Show) took to Twitter to post an entertaining video saying “I’m 60 and sexy” and that he’d be eating creamed corn and strained peaches.

He won’t be knockin’ on heaven’s door any time soon, as the mercurial frontman for Guns N’ Roses still has what it takes, enjoying a surprise performance recently with country singer Carrie Underwood on stage.

He and the band are also loving that their Sweet Child O’ Mine best song of all time has found new prominence as the title track to Thor: Love and Thunder.

The founder and frontman of Bon Jovi, who was spotted in early June hanging out at a training camp with the New England Patriots, was on tour when he turned 60.

He thanked everyone for their birthday wishes via Instagram: “So on this occasion of my 60th … 60th birthday?! It fits. I feel good about it.”

Son of Wall Street actor Martin Sheen and the older brother of Charlie, Estevez, best known for The Breakfast Club, St. Elmo’s Fire and The Outsiders joined the 60s club.

IMDb reported he said: “I swore to myself that I’d make it through drive, ambition and hard work. I wanted to know I got it that way and not because of my bloodlines. And I think there is no question why I got where I am today. I’m pretty content. I have a motto: Expect nothing and be pleasantly surprised.”

On celebrating her 60th, singer and TV host Abdul told ET Online: “Every day we [should] celebrate ourselves. We are above ground. We are living. We are healthy.

“You know what? We’re celebrating really important things in life.”

She’s undergone a renaissance in the US entertainment industry with Crazy Rich Asians and box office smash Everything Everywhere All At Once, and she’s just completed an adventure into voiceover for the latest Minions iteration.

Yeoh, who starred with Pierce Brosnan in 1997’s Tomorrow Never Dies and won a best actress BAFTA for 2000’s Crouching Tiger, Hidden Dragon, recently told Vanity Fair: “I’m not going to lie, I waited a long time for this, and I am so lucky for this opportunity”.

Forever the child! Comedian and actor Steve Carell (The Office, Despicable Me) is still having fun and has the respect of Hollywood taking on more serious roles such as The Morning Show.

Luhrmann is still giddy from the success of his latest film Elvis, riding the wave at festivals, premieres and parties around the world.

He’ll no doubt celebrate in fever-pitch style in September.

Odenkirk (Better Call Saul) is having a big year and one social media fan summed it up perfectly: “He is able to to flawlessly avoid the 60-year-old voice and movements, he waves around and runs like a younger man excited for his future, you never get the “old man” feel from him.”

Moore (Ghost, Indecent Proposal) will celebrate the big day later this year with her adult children Rumer, Tallulah and Scout Willis, and no doubt former husband Bruce Willis, with whom she remains close.

Speaking to US non-profit AARP, which dedicates itself to the over-50s for all things from travel to finance, Foster said: “There’s research showing that there’s a kind of happiness and contentedness that people have in their 60s and 70s that is just not available to them in earlier life.

“There’s a neurobiological change, where you’re much more relaxed about the future because you’ve already arrived into the future.