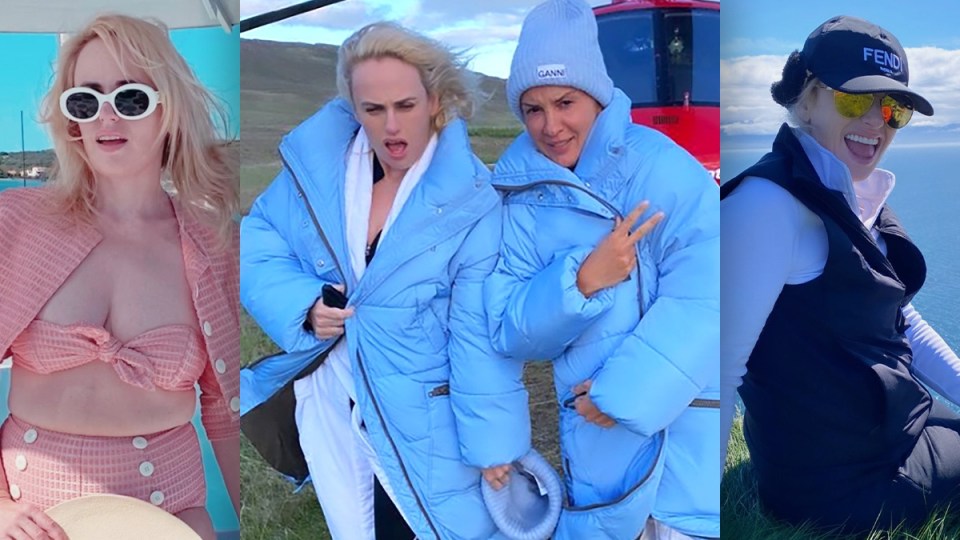 On her own terms, Wilson shares new photos of her European holiday. Photo: Twitter/Rebel Wilson, Instagram: Rebel Wilson via People

Australian actor and comedian Rebel Wilson has had a busy few weeks – and she has been handling it all with grace.

Since announcing her same-sex relationship with Los Angeles fashion designer Ramona Agruma on June 10 after the Sydney Morning Herald’s Andrew Hornery seemingly threatened to out her, it appears she’s having the time of her life on a whirlwind European vacation.

In her latest posts to her 11.2 million Instagram followers, the 42-year-old Senior Year star, and Ms Agruma – whose sustainable clothing brand Lemon Ve Limon features in a few snaps – have flown on a private jet to the chilly waters in Iceland, lunched in Italy, dined in Paris and hung out with hot polo players.

Among the hundreds of reactions from fans after international anger at how the SMH handled her coming out, one fan summed it up pitch perfectly: “Rebel, you look so happy, and loved up. Congrats to you both. Stay strong, as you always do. Aussie spirit … we have you in our hearts chicky.”

In one of Wilson’s recent Instagram stories, the couple went for a scenic helicopter ride in Iceland, and later posed together rugged up in ankle-length, baby blue puffer jackets.

“Trying to look cool whilst freezing”.

In the same story, wearing thermals and black fur-lined hiking boots, she sits solo on the edge of an unidentified cliff.

A few days earlier, with camping gear perched on the rocks beside a lake, she was photographed in a black wetsuit bathing in one of the country’s famous thermal springs.

A source told People magazine Wilson and Ms Agruma are “super happy together” after they made their relationship Instagram official with the hashtag ‘loveislove’ and a rainbow emoji.

“I thought I was searching for a Disney Prince … but maybe what I really needed all this time was a Disney Princess #loveislove,” Wilson said in a caption of a picture with her girlfriend.

The People source said the pair has been dating since January and that they attended Super Bowl LVI together in February.

“It’s a very serious relationship and they’re super happy together,” the insider said.

“It’s been very cool for Rebel’s friends to see her this secure with someone.”

Last month, during an interview with the same celebrity magazine, Wilson hinted at being in a new relationship but did not name her girlfriend.

“I was on and off on the Raya [dating] app, but this was a friend set up,” she said.

“He had known both of us for at least five years and he thought we would hit it off – and then we did!”

In their first photo after the SMH scandal, Wilson and Agruma posted a photo together somewhere in Italy, smiling and holding hands.

Last week, the Daily Mail reported the couple were enjoying Paris, driving around in a red Lamborghini before meeting a female friend for dinner.

Ms Agruma then posted photos of the couple in Cannes, with Wilson posing on a yacht in a 1960s three-piece high-waisted bikini, and later in a black one-piece with resort kaftan cover-up.

As if she was on top of the world, tipping her hat, Wilson wrote: “Corsica”.

Handling it with grace

Wilson’s coming-out announcement came after SMH reporter Andrew Hornery emailed the Bridesmaids star and gave her two days to comment on her romance.

Hornery said he knew about the relationship with Agruma before Wilson’s revelation and scorned her for choosing to make it public herself – rather than collaborate with the paper on a story.

“Wilson opted to gazump the story, posting about her new ‘Disney Princess’,” he wrote in a since-deleted column, later describing the story as a “mistake”.

“Considering how bitterly Wilson had complained about poor journalism standards when she successfully sued Woman’s Day for defamation, her choice to ignore our discreet, genuine and honest queries was, in our view, underwhelming.”

That sparked outrage from Wilson’s fans, the LGBTQIA+ community and other journalists.

“Apparently it wasn’t Rebel Wilson’s choice to come out… The SMH/The Age have admitted to giving her a heads up 2 days in advance that they were going to ‘out’ her,” 10 News journalist Kate Doak said on Twitter.

Wilson thanked Doak for her comments in a subsequent tweet: “It was a very hard situation but trying to handle it with grace”.