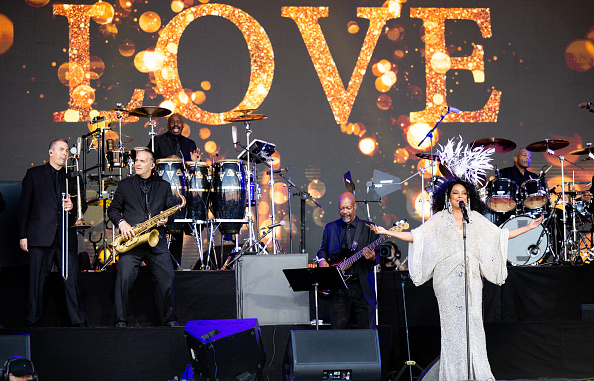 Disco diva Diana Ross, and a Prince Charles treasure, stole some of the show. Photo: Getty

After a three-year COVID-induced hiatus, Britain’s biggest music festival Glastonbury has made history for all the right reasons over its fever-pitch five days.

To mark her long-awaited return to the stage, English singer-songwriter Lily Allen sang her hit F–k You alongside High School Musical sweetheart and Driver’s License singer Olivia Rodrigo in response to the US Supreme Court’s decision to end the country’s constitutional right to abortion.

Rodrigo, 19, said she was devastated and terrified that “so many women and girls were going to die”, naming the five judges involved who “didn’t give a s–t about freedom”, and said: “We hate you.”

US singer and indie star Phoebe Bridgers echoed a similar sentiment as the landmark decision broke on the same day as her set, as did Eilish, debuting her new song TV which features lyrics such as “the internet’s gone wild watching movie stars on trial/while they’re overturning Roe v Wade”.

To even things out, in the final showstopper, American icon Diana Ross – hot off the stage of the June 4 Platinum Jubilee party – felt the supreme love of the nation.

With tens of thousands holding flags, balancing on each other’s shoulders as the sun went down over Worthy Farm and singing every word of her set from Baby Love to Chain Reaction, the Prince Charles favourite told the crowd it was all so beautiful.

“I love the idea of singing during the day when I can see into your eyes. I don’t like singing in the darkness,” she said, before describing the experience as “so beautiful, so wonderful”.

The Independent review noted her rusty vocals but overlooked that at 78, and described her as a “ravishing ringleader”.

“There’s still a magical frisson to being in the presence of such a supernaturally famous and universally beloved pop icon,” it wrote.

Sir Paul McCartney and John Lennon ‘back together’

Sir Paul, the festival’s oldest headliner, had a host of crowd-pleasing moments, none more so than the final songs.

During the encore of his set, special technology was used to isolate the late John Lennon’s vocals from old recordings so the singer could duet The Beatles’ track I’ve Got A Feeling alongside his former bandmate.

The festival hosted an array of Ukrainian representatives across the weekend including the country’s President Volodymyr Zelensky, who delivered an address via a video message on one of the big screens.

“Glastonbury is the greatest concentration of freedom these days and I ask you to share this feeling with everyone whose freedom is under attack,” he said in a recorded message that drew cheers.

Glastonbury also hosted Kalush Orchestra’s first UK performance since they triumphed at Eurovision 2022, as well as staging a set from 2021 Eurovision stars Go_A.

Folk band DakhaBrakha and Eurovision 2016 winner Jamala performed together on the Pyramid Stage, sharing a message to “stop Putin”.

Hey now! Crowded House – the ‘sleeper hit’ of the festival

McCartney once lamented he wished he could write like Neil Finn, who delivered classic tracks like Don’t Dream It’s Over, to which the crowd sang every lyric.

Finn’s grandson Buddy stole the show though, singing I Got You!

Thunberg, 19, delivered a passionate speech from the Pyramid Stage, calling on society to take on its “historic responsibility to set things right” with the global climate crisis.

In a post on Instagram after the event, the festival’s co-founder Emily Eavis said it was an “honour” to have the environment activist, describing her speech as “inspiring, powerful and important”.

Eilish, 20, closed the first full day of music at the south-west England festival, which returned for its 50th anniversary two years later than planned after the pandemic scuppered the 2020 and 2021 events.

She said it was a “dark day” for American women, making the comment midway through a crowd-pleasing set on the famed Pyramid stage.

“I’m just going to say that because I can’t bear to think about it any more in this moment,” she said.