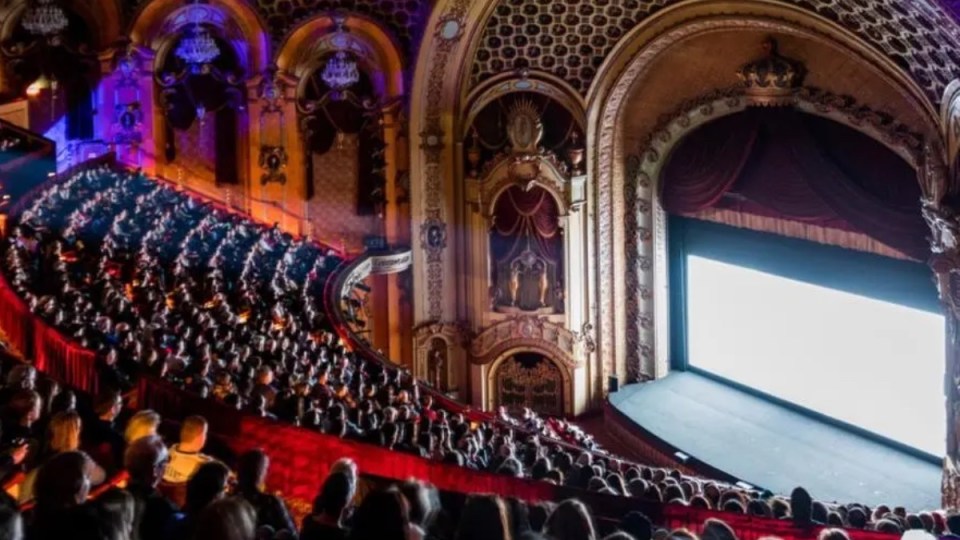 Back to June again, after the disruption of the past couple of years, the twin festivals of light – Vivid and the Sydney Film Festival – once again galvanise the city.

Here are my picks for best films from among the 40 or so I managed to catch.

Tchaikovsky’s Wife, written and directed by Russian auteur Kirill Serebrennikov, is a spellbinding exploration of an individual’s idealistic obsession with greatness.

The film follows Antonina Miliukova (a wonderfully understated Alyona Mikhailova) as she meets and then decides she wants to marry celebrated composer Tchaikovsky (Odin Lund Biron).

Tchaikovsky agrees to marry her, mainly, the film implies, as a beard covering up his sexuality and to access her proposed dowry.

He quickly tires of her – she’s annoying, clingy, doesn’t understand or fit into his Bohemian lifestyle – and demands a separation. But she refuses to let go, and much of the film involves following Antonina’s gruelling refusal to give up on her deluded belief in the fidelity and splendour of her marriage.

It is both incredibly sad and incredibly funny, a tale of an idiot whose naïve refusal to disbelieve in her love is as touching as it is infuriating.

But by the end of the film, all traces of humour are gone – Antonina has had three children with her lawyer Nikolai (Miron Fedorov), all of whom have died in the orphanage to which she abandoned them.

The whole thing culminates in a staggering, surreal dance sequence, the virtuosity of the production crew on full display.

Watching a film like Tchaikovsky’s Wife at the cinema is a genuine delight. It is replete with beautifully staged period details capturing the mania of 19th-century Europe. I am sure this will hold up as one of the masterpieces of the 21st century.

Similarly worth seeing on a big screen, Fire of Love is a documentary following the work and lives of Katia and Maurice Krafft, French husband and wife volcanologists.

Writer-director Sara Dosa skilfully foregrounds the contrast in temperament of the two researchers without undermining the seriousness of their research into volcanoes.

Maurice appears at times like a media-savvy entertainer, almost a charlatan, in contrast with his sober, serious wife.

This worked for the couple, Dosa points out, both personally and in their division of labour, with Maurice making their films and doing most of the speaking tours, and Katia writing up and publishing their research.

Fire of Love plays incredibly well as a documentary.

Miranda July’s narration is surprisingly restrained and the amazing footage of volcanoes captured by the couple on 16mm film blazes across the screen. The assembly of archival interview material is similarly first rate.

The enthusiasm the Kraffts have for volcanoes – and for each other – at all times underpins the film, lending it its energy, up to the tragic (and romantic) moment of the pair’s death, side by side, under the ashes of Mount Unzen in Japan in 1991.

The Passengers of the Night

Mikhaël Hers’ The Passengers of the Night is unapologetically sentimental with a degree of schmaltziness, I’m sure, bound to put off some viewers. But I loved it.

The film’s nostalgic recreation of 1980s Paris is punctuated by carefully observed (and at times genuinely touching) moments of connection between mother, son, daughter and friend.

The blend of drama and comedy works so well because of Hers’ light touch, and the whole thing is refreshingly non-polemical (the current cinema of the Anglosphere could learn a lot).

It is certainly a fantasy – a fantasy of family, friends, and resilience, of Parisian romance, of the 1980s – and, like the most effective fantasies, sweeps us out of the present into a moment that may have never been, but is nevertheless pleasurable to imagine once was – or could have been.

Hinterland, directed by Stefan Ruzowitzky, is an impressive film on all counts.

It is visually magnificent, with its deliberate recreation of a German expressionist aesthetic working seamlessly with its engrossing narrative.

Peter Perg (Murathan Muslu), a battle-scarred soldier returning to Vienna following the second World War, resumes his occupation as a detective to track down a serial killer murdering ex-soldiers in some of the most gruesome ways you’ll see at the movies.

Various clues point him back towards his memories of the war – and an ultimate reckoning with his frailty.

The tone is grim and unrelenting, but everything is so stylish, the actors are so charismatic – Muslu offers one of the most commanding performances in recent cinema – and the detective narrative so compelling that the movie passes by in a flash.

Hinterland works as both a homage to the Golden Age of European cinema and a gripping serial-killer thriller.

It’s a splendid film, best seen on the biggest screen you can find, and continues Ruzowitzky’s legacy of making big-budget Euro blockbusters.

Sometimes John Michael McDonagh’s work fails to hit the mark – it can appear pretentious in its attempts at authenticity, in its deliberate political incorrectness and geezer-esque humour. This is certainly not the case with The Forgiven.

This is a near-perfect film (marred by an imperfect ending), both a gruelling revenge and redemption film in the style of Calvary and a study – and critique – of the continued excesses of the Western elite in one of the former colonial outposts of Empire, Morocco.

Most of the film takes place during a party at affluent Richard Galloway’s (Matt Smith) villa-cum-pleasure palace in the High Atlas Mountains.

When alcoholic grump David (Ralph Fiennes) and his wife Jo (Jessica Chastain) run over a local boy on their way to the party, David is forced to set off on a ritual journey involving his return to the boy’s home to help bury the body, while Jo stays behind at the party – and parties!

The contrast between Fiennes’ development from antisocial curmudgeon to empathetic humanist might appear too neat on paper (with whiffs of colonialism about it – the Arab body is good only for the redemption of the white master), but it is so skilfully rendered by McDonagh (and Fiennes) that it packs an emotional wallop for the viewer.

The Forgiven has all of McDonagh’s signature traits – gallows humour, lots of drinking, and a Catholic commitment to the possibilities of redemption in spite (or because) of the horrors of life.

But its stark structure in which the earnestness of David’s journey is savagely contrasted with the bourgeois decadence of the party makes it more effective than his earlier films.

The best of the rest

There were several other films that could replace any from the list above.

The astonishing documentary Into the Ice, for example, featuring breathtaking footage of scientist Alun Hubbard as he abseils into the moulins in Greenland, or the Danish period drama Godland, stunningly shot on celluloid film following a priest’s frost-bitten journey across Iceland.

Day After… written and directed by Kamar Ahmad Simon is a striking picaresque documentary-fictional hybrid, following passengers on a paddle steamer travelling from Dhaka to Khulna in Bangladesh.

The Spanish horror thriller Piggy is one of the best of the genre I’ve seen and Inu-oh, a bizarre anime rock opera, shows director Masaaki Yuasa to be one of the most original voices working in the medium today.

The only two disappointments were Unrest and Elvis.

The premise of Unrest is excellent – in the late 19th century in Switzerland, we follow the work of clock makers as revolution brews – but its treatment is so dull it’s painful to watch.

Elvis is similarly hampered by banal treatment, surprising given director Baz Luhrmann’s usual flair, and is almost sunk by a painful and irritatingly knowing performance from Tom Hanks as the Colonel, Elvis’ cut-throat manager.

One of the pleasant tragedies of most film festivals is that one can never see everything one wants to see, and some of the major films that I missed include Close, the winner of the Sydney Film Prize, Ruben Östlund’s Triangle of Sadness that won the Palme d’Or at Cannes, and Julia Davis’ crowd pleaser Nude Tuesday. Given their international success, these films are sure to be released to theatres soon.

Melania Trump: Bombshell revelations about what she did during US Capitol riot
Retailer pauses facial recognition tech trial after privacy complaint
Donald Trump grabbed at steering wheel in bid to get to Capitol riot
Two charged over US migrant truck deaths
Governor-General admits ‘mistake’ over Insta ad endorsement
Nick Kyrgios spits at ‘disrespectful’ fan at Wimbledon
Lavish joint 40th birthday bash for Prince William and Kate, as Harry left out in the cold
Today's Stories

The five best films from the 2022 Sydney Film Festival