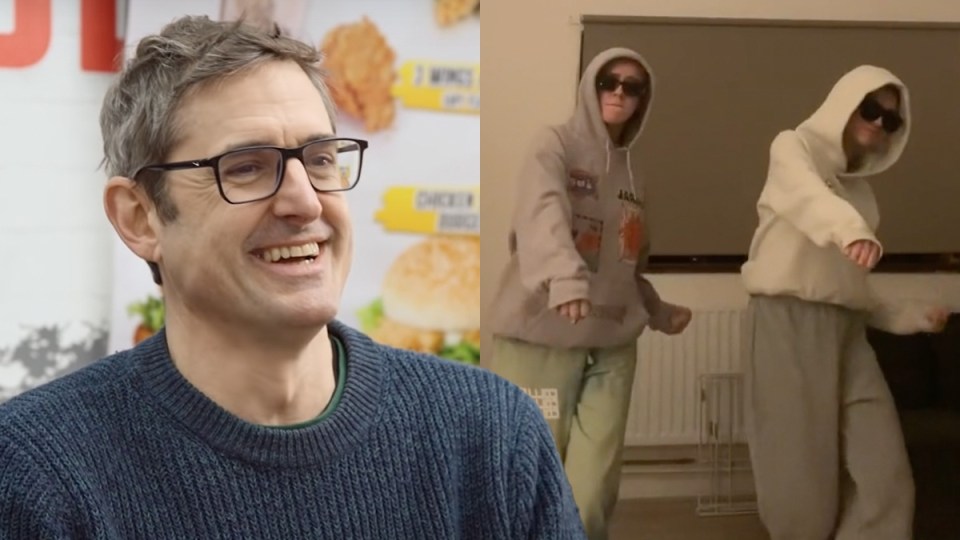 British documentary-maker Louis Theroux has unexpectedly become the biggest TikTok star of the year – all thanks to a bizarre series of events.

Theroux can be heard on a multitude of videos throughout social media performing his amateur rap, Jiggle Jiggle.

When he first performed the rap, more than two decades ago, he likely never dreamed it would have the enormous impact it is exerting today.

Theroux’s verse was first recorded in an episode of his Weird Weekends BBC documentary series in 2000 – a bit of fun at first, a gag even.

The comedian had visited a studio in New Orleans to see if he could make it big as a gangster rapper. After he came up with the lyrics in the shower, Theroux participated in a rap battle, giving his all in a live radio competition.

And while the verse didn’t seem to resonate with all the station’s listeners at the time, a remix has since found an enormous audience with a new generation.

Jiggle Jiggle is now the undisputed catchiest song of 2022 and Theroux’s vocals have been used in more than 6.2 million TikToks and heard more than 1.39 billion times around the globe.

So how did Theroux’s amateur rap verse go from gag to glory?

The Jiggle Jiggle resurrection started when Theroux appeared on Chicken Shop Date – a YouTube series hosted by comedian Amelia Dimoldenberg back in February.

While chowing down on a meal of chicken and chips in a takeaway shop in London, the pair discussed their mutual love for music – Dimoldenberg eventually bringing up Theroux’s brief rap career.

“I have rapped in a Weird Weekends episode about rap,” Theroux admitted. After which he was persuaded to offer an impromptu performance.

The pair added autotune and groovy low-fi music to the verse in a TikTok uploaded on March 17 as part of their series, ‘adding auto tune to random videos’.

“He [Tom] was cooking a pie in the oven and it took 15 minutes to cook and I said ‘I reckon in 15 minutes I could get this done.’ So he sets the timer I go off to work on it,” he said.

The beat immediately spread like wildfire, the clip going on to amass over 67 million views (and counting).

Two and a half weeks after Duke & Jones’ audio went live, professional theatre performers Qualter and Blewitt were listening to the viral audio when they decided to film themselves dancing along.

The pair threw on hooded slouchy jumpers, trackies and oversized shades and performed a goofy routine, each line of Theroux’s rap earning its own signature goofy move.

The stone-faced, quirky routine quickly took off online, with the dance since emulated by TikTok’s biggest creators and countless celebrities  – many of them dressing in similar outfits.

Singer Shakira, the cast of Riverdale and members of massively-popular K-pop group BLACKPINK are among the stars that have since copied Qualter and Blewitt’s moves.

Speaking to The Gazette last month, Qualter said she never expected the clip to be seen by anyone outside the duo’s circle.

“If I’d known it would be seen by so many people, I’d have tried a bit harder for the video!”

does this turn you on? #fyp

You should never underestimate the power of a meme – particularly this cracker of a meme.

With Theroux’s verse now having passed through several hands, the trend’s success has boosted each creator’s careers in just a matter of months.

For Dimoldenberg, Theroux’s chicken shop date, her show is continuing to soar to new heights. Her interview with Theroux has been viewed more than eight million times, the comedian having found a dedicated fanbase of chicken and pop culture-loving viewers.

Dance partners Jess Qualter and Brooke Blewitt have now set up their own joint TikTok page, where they continue to document their hilarious jigs – oversized hoodies and shades still remaining a key feature – while scoring millions of views.

As for Theroux, he seems to be enjoying entertaining his legions of new fans.

While he is yet to comment on the mammoth trend directly, he joined TikTok back in May, posting a duet alongside rapper Snoop Dogg, showing off his moves to the ‘Jiggle Jiggle’ remix.

Theroux has even met with Duke and Jones back in May to re-record his vocals for the song’s official release across major streaming platforms.

With the track having already amassed more than 22 million listens on Spotify, it’s clear this meme isn’t slowing down anytime soon.

How to save $50 off your food bill and still eat tasty, nutritious meals
Museum’s denial of Kim Kardashian damage to iconic Monroe gown
Today's Stories