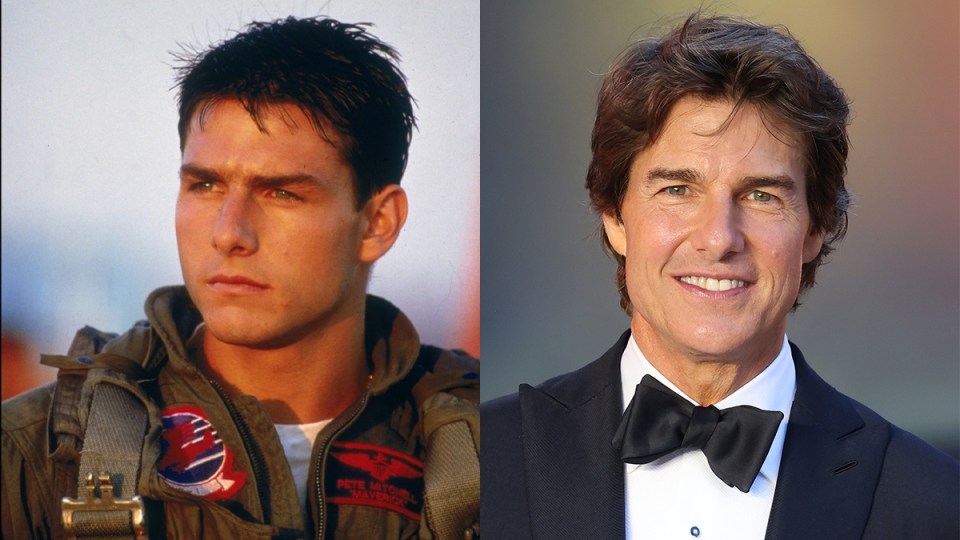 Tom Cruise has worked hard to stay on top of his game for his starring role in Top Gun: Maverick Photo: Paramount/Getty

In 1986, Tom Cruise was a 24-year-old “larger than life” character in Top Gun, flying by the seat of his pants at many times the speed of sound in dog fights with an unidentified enemy somewhere over the Indian Ocean.

He was Lieutenant Pete “Maverick” Mitchell, and had his best friend and radar intercept officer, Nick “Goose” Bradshaw, played by Anthony Edwards, by his side.

He hung out with, and flew with, well, the best of the best.

So why weren’t these key cast members recalled 36 years later for Top Gun: Maverick, which opened in cinemas on May 27?

We know Goose died and son Bradley (played by Miles Teller) is all grown up and gets top billing here along with a cast of other 30-somethings, but why does Cruise, who turns 60 on July 3,  look action-fit in this blockbuster compared to his original cast mates. How has he done movies so well for so long?

The May edition of Men’s Health magazine asks the same questions, and unpacks for us his training regime, his work ethic, his carefully managed diet and his mindset.

“There is no one thing that keeps Cruise in action hero shape or as, arguably, the last great Hollywood star. There are multiple secrets behind his youthfulness,” it wrote.

Sydney University film expert Dr Bruce Isaacs “isn’t sure how Cruise has managed perpetual youth”, but he says, “it might have something to do with the Cruise mythology”.

“Cruise has always drawn on his physicality in his performances. After a brief flirtation with Hollywood art movies – Magnolia and Eyes Wide Shut – he knowingly remade himself as the eternally young action-adrenaline junkie.

“I’m not sure how Cruise has managed perpetual youth, but I wonder if it might have something to do with the Cruise mythology,” he says of the kid who hit the big-time with Risky Business in 1983.

Although audiences relished and cheered throughout the film with all the original nuanced references, fans were wondering why none of the main original cast, except Kilmer, were brought back.

Director Joseph Kosinski told Insider that bringing back the two major female characters – Charlie and Carole – was never even considered while the sequel was being developed.

“Those weren’t stories that we were throwing around,” he said.

Kosinski said there were “enough touchstones from the first movie” with the return of Kilmer as Iceman, and a major storyline being Maverick training Goose’s son, “Rooster” Bradshaw.

“I didn’t want every storyline to always be looking backwards … It was important to introduce some new characters.”

With McGillis not offered a role as his love interest 36 years later – which makes sense – the suave naval aviator has to have a love interest, someone only briefly mentioned in the original.

Yes, he had a sweet fling with the Admiral’s daughter, Penny Benjamin and here she turns up as a single mum who runs the local bar near the flight school when Mav returns to teach his new pilots.

“Penny Benjamin, a character we have heard mentioned but never seen before, that was an amazing opportunity to bring Jennifer Connelly’s character into this film,” Kosinski said.

Let’s see where the Top Gun stars are now, and what they look like!

In 2019, McGillis, 64, who had been largely out of the spotlight for years and lives in North Carolina, told Entertainment Tonight why she wasn’t contacted to be part of the sequel.

“Movies are odd things. I don’t really keep in touch with anybody,” she said.

“I think I’ve spoken to a couple of people occasionally, but the truth is, movies are very odd work situations because you have a lot of people who come together from all different parts of the world.”

“It was very challenging for me to have any kind of sense of self or self-identity or real self-worth other than what I did for a living,” she admitted.

“And it just – it didn’t become a priority. What became the priority initially was raising my girls and being the best sober parent I could be.”

“I am a home person. I’m really rooted in my home life … I can’t remember the last time I worked,” she said, telling ET that she was diagnosed with alpha-1 antitrypsin disorder about five years ago.

After Top Gun, Ryan, 60, went on to make When Harry Met Sally in 1989 with Billy Crystal, followed later by City of Angels and You’ve Got Mail.

She had breaks from the industry, returning to make independent films and, sadly, was nominated in the worst actress category at the Stinkers Bad Movie Awards in 2004 [the LA website closed in 2007].

IMDb records her last role in TV series Picture Paris in 2018, but with the title of producer and director under her belt, five weeks ago she posted on Instagram that she directs and stars alongside David Duchovny (X-Files) in rom-com What Happens Later.

Kilmer, 62, was Cruise’s co-star in the original Top Gun, and he’s the only one brought back for the sequel, despite losing his voice to throat cancer seven years ago.

Producer Jerry Bruckheimer told The Hollywood Reporter it was Cruise who was adamant Kilmer reprise his role for the sequel.

“[Tom said] I’m not making this movie without Val.”

“So he had some ideas on how he wanted to play it and what he wanted to do with it, and we loved it. When we filmed it, it was a very emotional day, having Val there and seeing him work with Tom after 35 years.

“These two brilliant actors were going at it, and it was really a once-in-a-lifetime experience to have those two gentlemen in front of the cameras again.”

“Goose” died in the original after the pair flew through a jet wash during a training exercise, but not only does his son Bradley play a key role in the skies, there are several references woven throughout the film about the beloved character.

Up next for him is the TV series We Crashed and Tales of the Walking Dead.

“Viper” had a history with Mav’s father, Duke Mitchell, flying with him during the Vietnam War.

Skerritt, 88, recently opened up to Fox News about the sequel.

“You can’t revive something that’s already been done.”

Charles ‘Chipper’ Piper was one of Mav’s fellow pilots at Topgun.

These days, Pasdar, 57, gets regular work on a multitude of TV series and movies, and has loaned his voice to video games including Transformers: Robots in Disguise.

Robbins, 63, flew with Mav after Goose died in the original. There were some great lines, best left to the 1980s including this last one from his character Merlin after the final dogfight at the end of the movie: “Mustang, this is Voodoo 3. Remaining MiGs are bugging out”.

As for the remainder of the pilots in the original, including Slider, Wolfman and Hollywood, they’re not back either.

“The central appeal of the Top Gun franchise is how it seamlessly merges the brazenness of youth, sex appeal, and fighter jet action.

“Of course, people in their late 50s can still fly planes, but when it comes to youth and sex appeal, a cast from 36 years ago wouldn’t quite be the ticket,” concludes Screenrant.