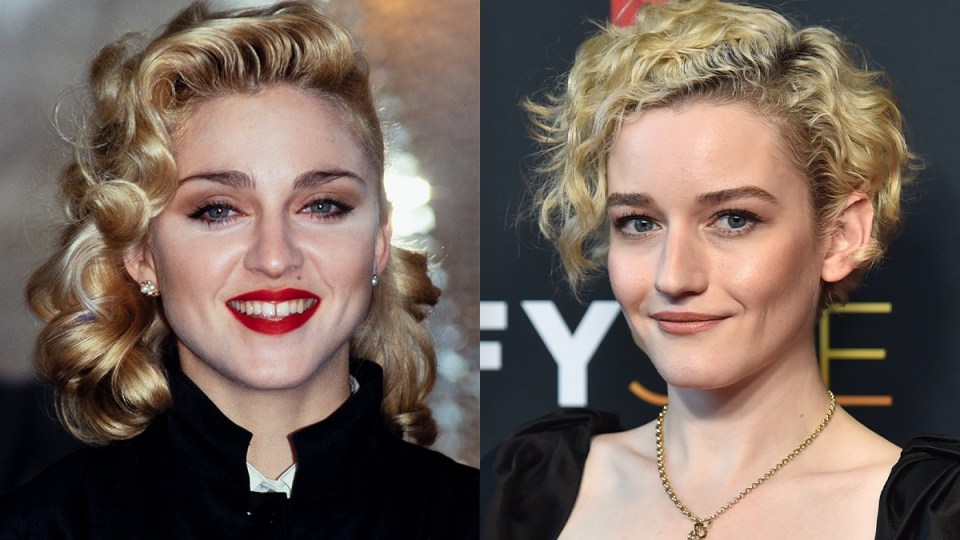 Earlier this week, Variety reported Julia Garner, 28, who plays Langmore in the hit Netflix series, was selected over a dozen hopefuls.

Garner, who was born in The Bronx and enjoyed success last year playing a fake German heiress in TV series Inventing Anna, is expected to accept the offer.

“The film is set up at Universal Pictures, and will follow the early days of the oft-controversial artist and queen of perpetual reinvention,” Variety reported.

Back in March, Harper’s Bazaar reported the auditions would also involve dance sessions with Madonna herself.

“Then there are callbacks, which consist of readings with Madonna, as well as singing auditions with the superstar,” the magazine said.

“[The film] will require dancing and singing sequences, meaning that after the audition process is over, the would-be star is still looking at months’ worth of intense training ahead of a potential start date.”

“You have to be able to do everything,” a source told Harper’s,, adding that the biopic will culminate in the Material Girl’s 1990 Blonde Ambition tour.

Last year, Madonna appeared on late-night TV talk show The Tonight Show starring Jimmy Fallon, where she first revealed she was taking over the project because past attempts at a movie about her life were “hideous superficial crap” by men.

Madonna told Fallon she preferred to describe the movie as a “visual autobiography” rather than a biopic.

“The reason I’m doing it is because a bunch of people have tried to write movies about me, but they’re always men,” she said, making a disgusted sound.

“I read Universal was doing a script … they sent me the script because they wanted my blessing. And I read it, and it was the most hideous superficial crap I ever read.

“And then I found out that some – I found out – I’m not even going to say his name, but he’s a total misogynist, was directing. And I’m thinking, ‘Why would these people make a movie about my life? There’s nothing true in the script, the guy who is making it has no understanding of women, no appreciation of women, no respect for women’.”

Madonna said this happened a few times, so she asked her agents to “threaten” those involved to stop the films going ahead. She said she threatened to stand in front of their building “and protest and make everybody’s life a misery if they [went] through with it”.

But after her efforts failed to deter interest in making a film about her, Madonna said she “threw down the gauntlet” and decided to take over directorial duties.

In a statement published by Variety, Madonna, born Madonna Louise Ciccone, 63, said she hoped to “convey the incredible journey that life has taken me on as an artist, a musician, a dancer – a human being, trying to make her way in this world.

“The focus of this film will always be music,” she went on.

“Music has kept me going and art has kept me alive. There are so many untold and inspiring stories, and who better to tell it than me. It’s essential to share the roller coaster ride of my life with my voice and vision.”

Ozark fans are still coming to terms with Langmore’s shocking death in Season 4 at the hands of Mexican cartel boss Camila Navarro (Verónica Falcón). But they are nonetheless full of praise for Garner’s suitability to take on the 80s star.

Many ran clips of Garner’s foul mouth in Ozark as her audition tape for the Madonna role, while others simply said she was going to own the role.

But can she sing and dance?

In 2019, Garner married musician Mark Foster, who is the lead singer of Indie rock band Foster the People (Pumped Up Kicks).

After winning an Emmy that year for her Ozark performance, Foster wrote:

“It brings me immeasurable joy to see you lifted up and recognised by your peers, your industry, and your fans.

“You deserve every bit of love and respect. You’re so incredibly special. I consider myself the luckiest guy on the planet to be able to watch whatever you do from the front row, with a bag of popcorn and your hand wrapped in mine.”

If that’s any indication of the support Foster will give her, then that makes two professional musicians already in her corner.