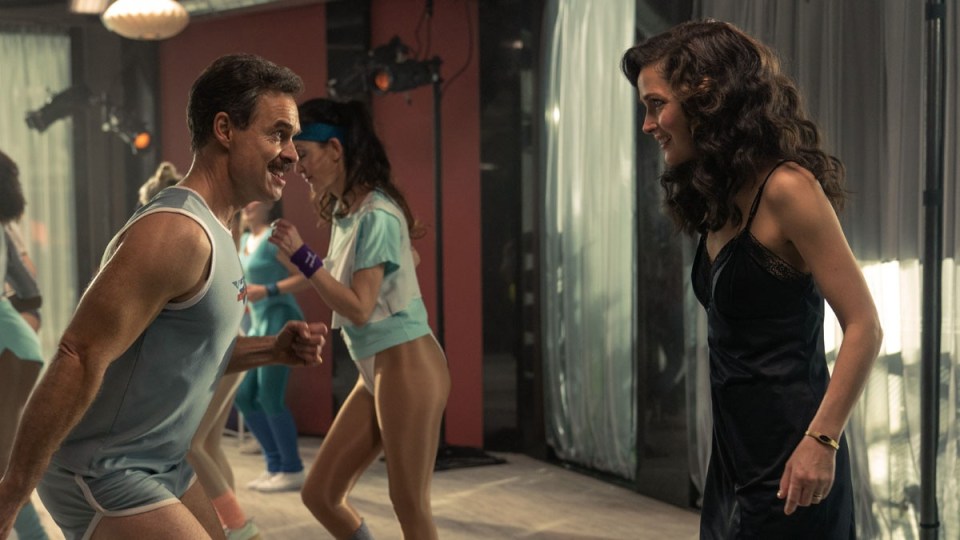 So that’s what he’s been doing!

Those who have been paying attention will no doubt remember Murray Bartlett.

Now, he’s joined the cast for the second season of Rose Byrne’s Physical, a 10-part Apple TV+ series based around the life and times of the fitness industry in the 1980s.

Season one focused on the rise of the at-home workout video.

And, even though he’s an industry competitor, his job here is to mentor Byrne’s Sheila Rubin into developing her brand, her product and her business empire.

“We wanted to play around with some of the ways that fitness culture was evolving in this time period and there were all kinds of colourful characters that were coming up,” explained the show’s executive producer Annie Weisman (About A Boy, The Path).

“Sheila’s not the only game in town anymore. And so, we start to see some new people nipping at her heels.”

And Bartlett does it in loads.

“[He’s] very upbeat, very inspirational, likes to have an emotional connection, even if it’s not a personal relationship.

“It’s interesting to have a character like Vinnie because he represents a singular kind of character that existed in that period,” Bartlett says of his role, cast in a complicated, tormented marriage.

Bartlett and Byrne’s 24 hours squeezed into one episode

Sheila has a lot going on in her world as she fights to have her first fitness video taken seriously and turned into a lifestyle brand and empire.

She is also struggling with an eating disorder and is in the midst of an unhappy marriage and an affair with a real estate developer.

Enter Bartlett, who brings the light and shade. He’s a “frenemy”.

“He’s got this bright light in a lot of ways. But like Sheila, he has a
rich interior world. He’s not as put together on the inside as he might appear,” he said.

And so, over the course of 24 hours (episode three, June 17), Sheila runs away from her life instead of heading to rehab after a gruelling period of self-sabotage.

“She ingratiates herself in Vinnie’s life, finding the safe space to finally articulate her biggest demons,” the official Apple synopsis reads.

“What closeted Vinnie shares is equally cathartic, revealing a complicated personal life and a domestic relationship with Marika (Anna Gunn), his wife who is both tough and tormenting”.

“Sheila realises that he can’t fully be himself either in public,” Weisman explains.

“He has to perform a personality. In his case, a sexuality that’s acceptable at the time, appealing and non-threatening. He has to keep an important part of himself private in order to be successful.”

In a recent chat on Entertainment Tonight Canada, Bartlett was asked what it was like to work with Byrne, an Emmy and Golden Globe-nominated star with film credits including Bridesmaids and Spy, and the recent limited series Mrs America, where she portrayed Gloria Steinem.

“Working with Rose is absolutely dreamy, so we had a lot of fun together,’’ he said.

“They call cut, and we are like, hey how ya goin’ [in joint Aussie accents], because we’re both Australian so it’s hilarious. It was a joy.”

Growing up in the 1980s, he says that world was very familiar to him and there’s a lot of nostalgia attached to his involvement.

“It was also a reminder of how over the top that stuff was, in reality … I had to lead an aerobics class which was fun … but had to go through an aerobics boot camp in preparation … which was intense,” he tells LGBTQ website GLAAD.

Just like his character in The White Lotus, he admits he’s been fortunate to play roles that are “not two dimensional”.

“Because I grew up in an era where there wasn’t those kind of queer characters on film and TV, I’m very happy to be able to dive into that.”

New Zealand actor Melanie Lynskey, who starred with Byrne in Mrs America, concisely posted on Instagram her thoughts on the match-up with Bartlett.

‘Dream team’: Surprise actor joins Australian Rose Byrne as she gets physical with her fitness empire