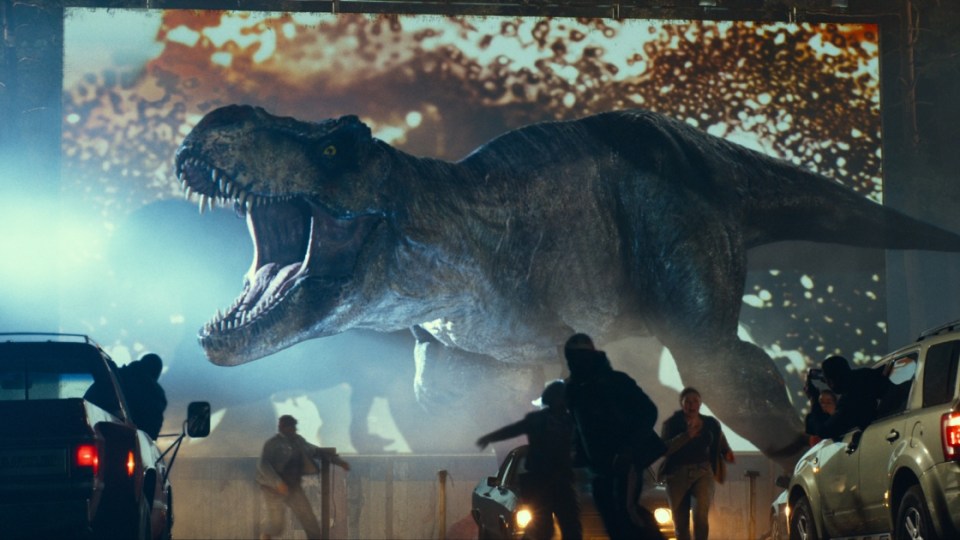 Lots of great movies for school holidays, as well as a few for the parents to grab on their own. Photo: AAP

The movie gods have spoken – and here’s the movie guide, right on time for the mid-year school holiday break.

Depending on which state you’re in, book the tickets and plan the cinema experience for the last week of June.

Let’s kick off proceedings with Jurassic World: Dominion, the enduring story of a group of humans who attempt to bring extinct, pre-historic dinosaurs back to life in a secure facility located somewhere in the Pacific.

Three of its original stars, Laura Dern, Sam Neill and Jeff Goldblum, reunite 30 years after making the original Jurassic Park (1992), joining Chris Pratt and Bryce Dallas Howard for the sixth film in the $5 billion ($7b) franchise.

Why do audiences still love a drooling giant dinosaur ferociously trying to chase down a bunch of earnest kids, paleo-botanists, mathematicians and scientists?

This time the island they inhabited has been destroyed, and the dinosaurs live – and hunt – among the human population. Guaranteed things go wrong, so it’s essentially the same story, but this time with new visual effects and never-before-seen dinosaurs.

“The technological footprint of Jurassic Park is undeniable, making it one of the clear game-changers in Hollywood history,” observes Vanity Fair in a recent cover story on the two generations of Jurassic stars coming together.

“But there’s also a case to be made that the original movie endures because of the affection viewers harbour for the human characters.”

Dern observes that its “unheralded and ongoing impact” may have something to do with “how many girls idolised her brave paleo botanist and found themselves drawn to careers in science”.

“Now, generations of kids or families connect to these characters. For me, to have women who have been inspired by [her character] Ellie Sattler, that’s an amazing feeling.”

If a sixth dinosaur movie isn’t going to rattle your cage on the big screen, let’s take a look at what else is on offer this month, including the highly anticipated Baz Luhrmann Elvis biopic.

It’s a slapstick animation fantasy adventure, whose main star is a lovable orphan who steals food to eat. She’s brave, clever and bonds with the local prince when enemies are hovering.

US-based Common Sense Media, which rates films and their suitability for children, warns there’s a scene where a man transforms into a “chickat” (part chicken, part cat), someone gets shot with a crossbow and another falls off a bridge, concluding its “ultimately fine”

“There is a small amount of rude humour, which includes a dog urinating, some mentions of unicorn poo, and a running joke with adult male characters in their underwear.”

School holidays don’t start for another few weeks, so go enjoy the cinema experience on your own with this one, given the adult themes.

This is the story of wartime English poet, writer and soldier Siegfried Sassoon, which is set in 1914 and stars Peter Capaldi, Jeremy Irvine and Edmund Kingsley.

The Independent UK says this “evocative drama is no cradle-to-grave biopic”, but more a story about one man’s journey from the shores of Gallipoli, with plenty of voice-over poetry read out, to the battleground of unrequited love and romance in the 1920s.

No one will forget the impact Woody, Jessy, Buzz Lightyear, Mr and Mrs Potato Head, Emperor Zurg, Rex and Slinky Dog had on us over the years in the four Toy Story movies.

But it was time for Buzz to get his own movie, and here he is, to infinity and beyond in all his glory.

There’s a decent storyline, Buzz is now voiced by Captain America’s Chris Evans, and it’s the first Pixar film to debut exclusively in theatres since the start of the pandemic.

Audiences have been waiting a long time to see Elvis, an almost three-hour epic filmed on the Gold Coast before, during and after the global pandemic.

It finally made its premiere at the Cannes Film Festival on May 25 to a 12-minute standing ovation.

Elvis’ grand-daughter, Riley Keough, in Cannes as a first-time director for her film War Pony, told Variety it was an emotional experience.

“In the first five minutes, I could feel how much work Baz and Austin [Butler, who plays Elvis] put into trying to get it right … I started crying five minutes in and didn’t stop.

“There’s a lot of family trauma and generational trauma that started around then for our family.”

A documentary for the music buffs who remember the music and career of George Michael (former lead singer of Wham).

The official synopsis reads: “[This film] focuses on the formative period in the late Grammy Award winner’s life and career, leading up to and following the making of his acclaimed, best-selling album Listen Without Prejudice Vol 1 and his subsequent, infamous High Court battle with his record label that followed, while also becoming poignantly personal about the death of his first love, Anselmo Feleppa”.

Made before his death on Christmas Day 2016, there’s a lot packed into this, which is largely narrated by himself.

Plenty of key moments include, for the first time, the original five supermodels from the Freedom! ’90 video – Naomi Campbell, Christy Turlington, Cindy Crawford, Tatjana Patitz and Linda Evangelista – who come together to discuss their experience on the iconic music video.

It’s against the rules to look at Facebook Marketplace on your phone in the cinema, but parents, go right ahead.

The kids will love this crazy chaos lead by Gru (Steve Carell), who is 12, and it’s his dream to become the world’s greatest supervillain.

Dolph Lundgren, Alan Arkin, Julie Andrews, Russell Brand and Michelle Yeoh join an amazing cast and for that, it may keep your attention.

According to Forbes, the Despicable Me series – $US3.7 billion ($5.23b) counting the $US1.1 billion-grossing Minions) is the biggest grossing animated franchise in history.