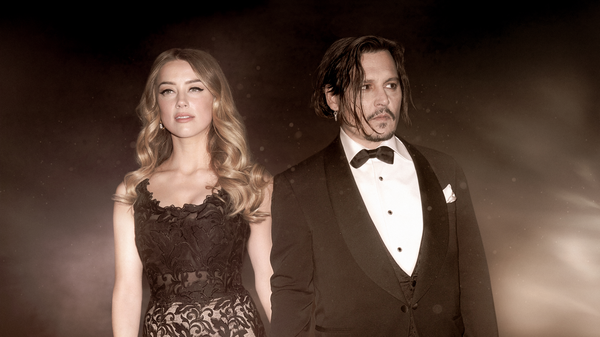 As the Johnny Depp-Amber Heard defamation trial enters its final days, a two-part documentary about the couple’s “tragic union” and their 2020 UK libel case has been cut, edited and scheduled for release.

Called Johnny vs. Amber, to be released on May 26, the two episodes take viewers “to the very genesis” of how the couple met on a film set, fell in love, married and divorced.

At its core, the documentary unpacks how the actors’ private lives were laid bare in a London courtroom after Depp brought a libel case against News Group Newspapers Ltd in the UK and sued The Sun for calling him a “wife-beater” in a 2018 article.

The trial started in 2020, and ended with a London High Court judge ruling that Depp had repeatedly assaulted Heard.

The documentary’s official synopsis, from US TV network Investigation Discovery (ID), says the current trial of Johnny Depp v Amber Heard is capturing global attention with daily testimony unfolding from the stand “that reads like a plot from a contentious drama”.

“Two of Hollywood’s most glamorous movie stars accuse one another of horrific acts of domestic abuse, and reveal a relationship that seemed to be toxic from the very beginning,” it reads.

“But, in all this chaos and confusion, it begs the question of how did this all start?”

Throughout the first hour, we’re taken on a rollercoaster ride of Depp’s career starting with his immediate success in TV series 21 Jump Street and being cast as a vulnerable loveable orphan in Edward Scissorhands, with texts, tapes and home videos played to the court.

We hear his account of events denying he was a domestic abuser, which highlights moments such as when Depp’s finger was smashed open after Heard allegedly threw a vodka bottle at him when the couple were in Australia in 2015.

The second hour is a “dedicated look” at the evidence and accusations presented by the Aquaman actor Heard, including the infamous facial bruises she suffered after Depp allegedly threw a mobile phone at her.

Variety reported in November that the documentary was in the pipeline.

Head of entertainment at Discovery Clare Laycock described the “multi-layered story” of Depp and Heard as “both engrossing and horrifying”.

“The series provides an in-depth insight into the epic battle that powered #JusticeforJohnnyDepp and #IStandWithYouAmberHeard fan campaigns and the very public High Court case that gripped us all,” Ms Laycock said.

Discovery’s Charlotte Reid said their story continued to be divisive.

“We set out to make a documentary that would explore the story from each of their perspectives, so the viewer can go beyond the headlines, understand who they are, and decide who they should believe in this complex human story,” Ms Reid said.

“We think it’s a compellingly contemporary story on truth and lies that we hope will open up a conversation.”

The opening credits state the 2020 case was the “libel trial of the century”.

Fast forward to 2022, and the case before the Fairfax County Circuit Court has well and truly surpassed that tag.

The three-week trial in London looked more like a feud between former spouses, observed the BBC.

But the second trial took it up a few gears, with the New York Times saying it “has become a fierce battleground over the truth about their relationship, with both sides accusing the other of repeated domestic abuse in what was an unquestionably tumultuous marriage”.

The seven-person jury trial in the US before Judge Penney Azcarate was brought by Depp and started on April 11.

Depp alleged he was defamed after Heard wrote a 2018 op-ed in the The Washington Post that described herself as “a public figure representing domestic abuse”.

His name was never mentioned in the article. But he is seeking $US50 million ($69 million) in damages, and in return Heard is countersuing for $US100 million ($138 million), arguing she was defamed by Depp’s lawyer Adam Waldman when he called Heard’s accusations a hoax.

The trial is now in its final week, with closing arguments on May 27.

It is not known how long the jury will take to return a verdict.

What’s next for Depp and Heard?

Once this documentary is broadcast and the current case wraps up, one question is whether they can possibly return to the jobs they once loved, enjoyed and prospered from.

Heard’s Aquaman and the Lost Kingdom is in post-production and will be released in 2023. She’s also just finished filming In the Fire and is in pre-production for Run Away with Me, a romance thriller about an American in Paris who falls for a model.

Depp is scheduled to continue doing voice-overs for his character Johnny Puff in animated short TV series Puffins, which follows the adventures of a bunch of funny little birds.

He’s also in pre-production on feature film Jeanne du Barry, based on the story of Jeanne Bécu, who was born as the illegitimate daughter of an impoverished seamstress in 1743.

She went on to rise through the Court of Louis XV to become his last official mistress.

Johnny vs. Amber will premiere with back-to-back episodes on May 26 at 9.30pm AEST on dedicated crime channel Investigation Discovery (ID) and on Fetch