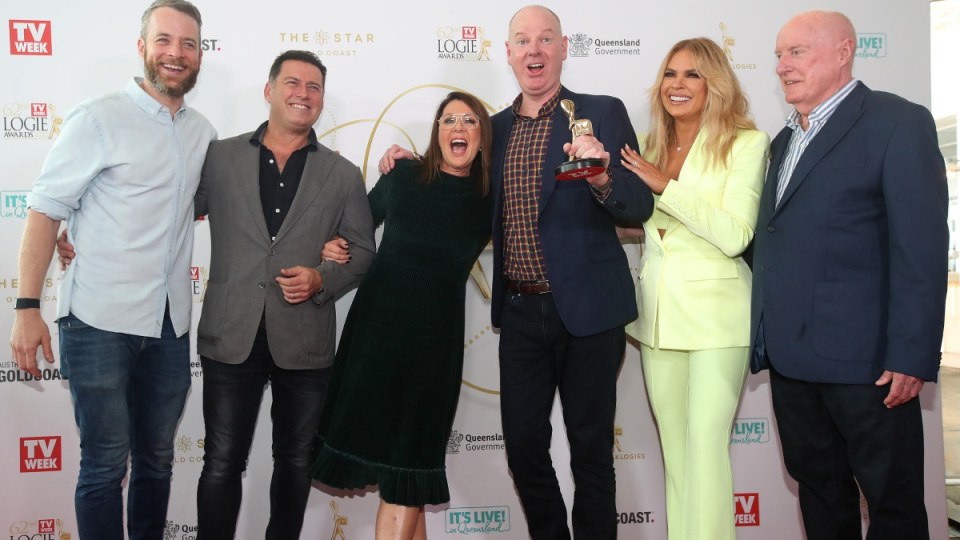 Who will take out the most coveted homegrown award – the TV Week Gold Logie for the most popular personality on Australian TV? Photo: AAP

Australia’s biggest television awards night, the Logies, looks like it’s back in full swing after a two-year COVID hiatus, with original programs on streaming services emerging as competition for the free-to-air shows.

Foxtel and Binge secured a heap of nominations, while Netflix, Stan, Paramount and Amazon entered the race.

There are also two new awards to keep us on our toes.

To celebrate the achievements of Australian talent around the world, there’s the Silver Logie for Most Popular Australian Actor or Actress in an International Program.

And TV legend Bert Newton, who passed away in October, has been honoured for his extraordinary career with The Bert Newton Award for Most Popular Presenter.

After nominations were announced across 24 categories on Sunday, with Gold Logie nominees including Nine’s kingpins Karl Stefanovic (Today), Hamish Blake (Lego Masters) and controversial winner Tom Gleeson (Hard Quiz, ABC) gathered for the 2022 nominations event on the Gold Coast, there were a few notable absentees on the list, a surprise inclusion and a first for a veteran TV star.

Hard-working Seven host Sonia Kruger, who has banked a whopping five shows under her belt during the past year – Big Brother, Holey Moley, Dancing with The Stars: All Stars, The Voice Australia, The Voice Australia Generations – told Rob McKnight’s 4GB radio segment on Sunday this was the first time she’s been nominated.

“I was so surprised. I’ve never been nominated for a Logie before,” she said.

But are the Logies relevant in 2022, or have the broad spectrum Australian Academy of Cinema and Television Arts (AACTA) awards developed enough to satisfy and congratulate our home-grown industry and talent pool?

TV expert and TVBlackbox.com.au editor Steve Molk tells The New Daily the “proof will be in the pudding” with the June 19 telecast.

“This is a real chance for the Logies to reinvigorate interest in the telecast and try new things, relaunch the brand,” Molk said.

“If they don’t, then they should only expect a lacklustre response from the audience.”

In 2018, Gleeson ran a tongue-in-cheek campaign spruiking for Grant Denyer to win, after his show Family Feud was axed.

“Let’s push the Logies to its most absurd extreme ever and give the Gold Logie to a guy that doesn’t have a TV show,” he said at the time.

In 2019, Gleeson quit Hard Quiz to make a point, promising to bring the show back if he won gold. He won that year.

“Last year proved you can only win if you don’t have a show,” Gleeson wrote on Twitter.

“That’s why I axed myself. When I win gold, I promise I will un-axe #HardQuiz immediately.”

Did Gleeson spoil the authenticity of the country’s biggest TV awards night with his routine?

“I think Tom called the Logies out for what it had become – largely irrelevant.

“He proved that with something like the Gold Logie (an audience-voted award and considered the highest honour in TV stardom), it’s up for grabs.

“Networks have been running campaigns to get people to vote for their talent for years.

“Tom simply did it publicly and it revealed, in part, the farce it was,” said Molk, pointing out that all the nominees appear on free-to-air programs.

Shaun Micallef, whose ABC show Mad As Hell has been nominated for most popular comedy program, set things straight.

“I am pleased that integrity and honour have been restored to the Gold Logie nominations.

“My only hope is that they make sure that talentless bum Tom Gleeson doesn’t win it again and one of those other hacks gets it,” he wrote on Twitter.

With only a short five-week window for fans to live-vote [which opened on May 15] for their favourite Australian television star, presenter, TV show or drama series, the clock is ticking.

Free-to-air shows on the commercial networks, the national broadcaster and SBS continue to dominate award categories, but the new player is the Foxtel Group (which includes subsidiary Binge), securing 20 nominations for what is now the 62nd TV Week Logie Awards.

Added Binge’s executive director Alison Hurbert-Burns: “Creating Love Me, Binge’s first original Australian drama, has been such a treat … we are thrilled that [it] has connected so strongly with Australian audiences, and incredibly proud to be recognised with seven Logie nominations.”

Stan has eight nominations in various categories including Jacki Weaver for Yellowstone, Isla Fisher for Wolf Like Me and Jamie Dornan for The Tourist.

Troye Sivan gets a nod for Three Months on Paramount+, while Amazon Prime Video also emerged with Hugh Sheridan for Back to the Rafters, and the documentary Burning.

Molk observed that with a tighter voting window this year, the audience will need to be drawn back in, “and with a fair chunk of them no longer watching FTA [free-to-air], how will they reach them?”

“We all know if we want reality, news, or sport (and largely the personalities that go with that) we’ll go to free to air.

“If we want drama or light entertainment, the streamers have really stepped up here.

“So it’s a win for the audience,” he says, and suggests it could either be a “mess” or a “challenge” for the networks.

And as for the talent left off this year’s nominations list, and possibly without an invitation to the gala celebration at the Gold Coast Convention and Exhibition Centre?