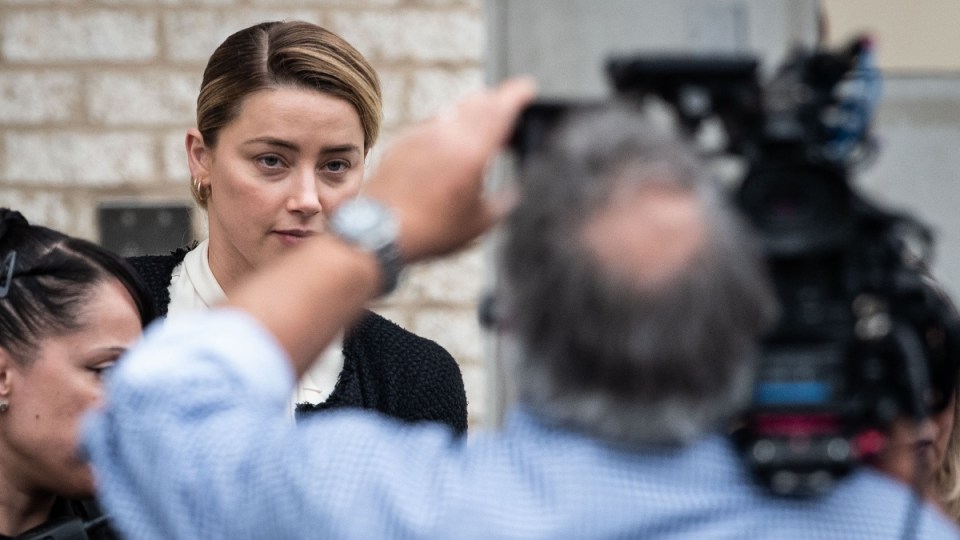 Amber Heard will return to the witness stand on May 16 to face cross-examination by Depp's legal team. Photo: AAP

Hollywood actor Johnny Depp has spent the past four weeks in a court room trying to prove his ex-wife Amber Heard defamed him when she claimed in a 2018 Washington Post opinion piece that she was a victim of domestic abuse.

Deeply disturbing testimony has been heard from Depp and Heard, as well as from their friends, experts and eyewitnesses.

But one element that distinguishes the defamation trial from many others is the level of public interest and courtroom access afforded to interested observers.

Proceedings have been live-streamed on Court TV and Law & Crime, while short clips of the trial have been watched hundreds of millions of times on social media, with the majority of public support seemingly going to Johnny Depp.

Depp’s fanbase has heckled Heard, chased her security convoy, held up “Justice for Johnny” signs outside court, and bought tickets to gallery seats inside the courtroom.

Online merchandise companies are selling T-shirts, mugs and stickers with printed messages of Depp quotes from the trial, such as “That’s hearsay I guess”, and “Isn’t Happy Hour anytime?”.

Others feature the words “Don’t Be An Amber” and “Team Johnny”.

Before the trial even began, and despite a protest from Heard’s legal team, the Circuit Court Judge Penney Azcarate authorised the use of cameras and recording devices, with a pool video system to remain in place for the duration of the trial.

TikTok memes mocked Heard’s testimony and facial expressions, while Twitter and Instagram went into daily overdrive about everything, right down to Heard allegedly copying Depp’s outfits, including by wearing a similar Gucci brooch on her three-piece suit and tie.

As pointed out by Variety on May 9, videos with the hashtag “amberturd” have been viewed more than 1.2 billion times to date, according to TikTok’s website.

Two in particular feature mock re-enactments of Heard’s testimony, while another user dressed their cats up as Heard and Depp as Jack Sparrow from his Pirates of the Caribbean movies, questioning whether one cat hit the other.

And on top of the social-media pile-on are the four million signatures on a change.org petition urging the producers of superhero movie Aquaman 2 to dump Heard, recast the role and reshoot her scenes, based on the allegation that she is a “domestic abuser”.

Courtney Pade, clinical assistant professor of communication and assistant director of the masters of communication management program at the University of Southern California, told Forbes on May 10: “The Depp and Heard case is incredibly complicated, yet has still been distilled into short, TikTok-sized segments that are easy to digest but can often be inaccurate or taken out of context”.

“By watching a few posts, TikTok and other social media platforms will continue to serve the user similar content, solidifying a one-sided impression of the happenings in the trial,” Dr Pade said.

Assistant professor of marketing at the Knauss School of Business at the University of San Diego, Colin Campbell, also told Forbes the use of short or remixed clips was damaging.

“Social media attention spans are short. This results in very short clips, or even remixes of clips, of trials being posted that likely don’t convey the full context a statement is made in.

“As we’ve seen, this can be damaging for both Heard and Depp.

“My research on consumer-generated content finds that people on social media love humour, especially irony. So any information that runs counter to what a person may have said before or their public image is ripe to be turned into a meme.”

Dr Pade added: “While social media during this case has leaned heavily in Depp’s favour, the question is whether this sentiment is reflected in the jury or, instead, a distorted view due to prolific content creators”.

Just take a look at one social media post showing Depp leaving court and waving to fans from his car.

“Both actors know that the court of public opinion is more important to their careers than the outcome of the trial and are using it as a mechanism for visual storytelling,” Dr Pade said.

“But this consumption via social media also allows viewers to avoid more nuanced and difficult discussions around domestic abuse.”

Warning: The following evidence may cause distress for some readers

The star of the Pirates of the Caribbean films is suing Heard for $US50 million ($70 million), saying she defamed him in the op-ed. His name is not mentioned in the article.

Heard has counter-sued for $US100 million ($141 million), arguing Depp smeared her by calling her a liar.

During the course of the live-streamed trial, their legal teams have extracted testimony of a toxic relationship, which in turn has raised serious issues of the #MeToo movement, intimate partner violence and how the rich and famous are powerful enough to use courts to play out their divorce in public.

By May 27, a jury will have to decide on who is telling the truth.

During the past two days of Heard’s testimony before the court adjourned, she broke down in tears on the witness stand as she alleged Depp sexually assaulted her with a liquor bottle and threatened her life during three days while they were in Australia in 2015.

“He was shoving it inside of me over and over,” alleged Heard, who shook her head and sobbed as she described the episode.

She said she kept thinking that she hoped the bottle was not one of the ones that was broken.

During the assault, Depp repeatedly said “I’ll f—ing kill you,” she told the jury.

Depp testified earlier in the trial that he never hit Heard and argued that she was the one who was the abuser.

Depp has offered a different account of the incident in Australia.

He told jurors that Heard was the person who hurled objects, hitting him with a vodka bottle that severed the top of his right middle finger.

His attorneys showed evidence of his hospital visit to surgically repair the injury.

He described her as “bullying” to him throughout their relationship and said she left him “broken”.

Depp, once among Hollywood’s biggest stars, said Heard’s allegations cost him “everything”.

Entertainment lawyer Mitra Ahouraian, who has watched every minute of the proceedings, tells Variety “this lawsuit was brought for Johnny to win the court of public opinion”.

“He’s using the courts as a platform to have his side heard.”

But will it work?

“Neither side is going to win,” she said.

The trial will resume on Monday, when Heard will return to the witness box.