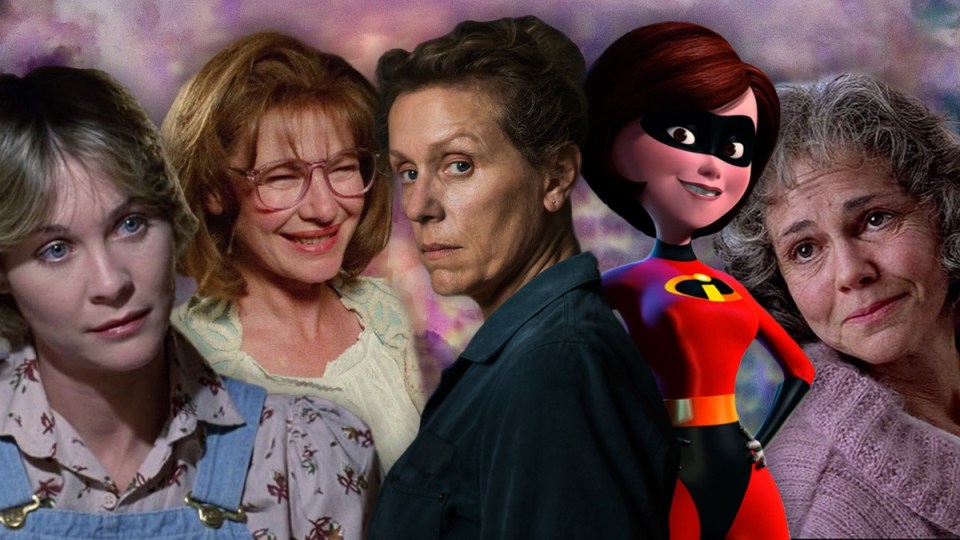 Mother’s Day is special. We all know that.

It’s about celebrating mums everywhere … for those about to raise children, raising them or having raised them.

For being there when the going gets tough, for the first walks, first graduations, first kisses and disappointments and, well, just about everything.

But here’s the thing.

After breakfast in bed is done with toast cut into love-heart shapes, lukewarm tea and schoolyard gifts of hand-painted candle holders, it’s time to make it really about you.

Curating the best Mother’s Days movies is easy, with every kind of mum you could see on your favourite (and paid-up) streaming service – there’s the scary mum, compassionate mum, neglectful mum, superhero mum, cheesy mum, loyal mum and the mum who just loves you unconditionally, the best kind of mum.

Forrest Gump’s (Tom Hanks) mother, played by Sally Field, knew her son was different, but that didn’t stop her dreaming big for him and encouraging him to see the world and be the best he could be.

She was an amazing mother to Forrest, and had words of wisdom for him until her death.

The “box of chocolates” clip is still relevant 28 years later. Brace yourself.

“This woman was the truest definition of a Mother against all odds she persevered … can you imagine existing in 1950s as a single mother … with a handicapped child, the stack completely against you yet she faced death with a steady hand, raised a man in which everyone he touched he made better … and even while dying she found a way to give him a foundation to continue on after her passing,” wrote one fan on the movie clips website..

“Forrest was truly blessed to have such a beautiful person as a mother.”

This film transcends all, showing that love and compassion will always overlook external appearances. And only a mother can see Edward’s vulnerability, kindness and gentle nature underneath that damaged exterior.

Dianne Wiest, who plays a cosmetics door-to-door saleswoman, discovers the teenage boy alone in a Gothic castle down the road after she knocks on his front door.

Played by a young Johnny Depp, his face is covered in scars, his hands are … scissors … so what is the first thing any mother would do to help their teenage son? Peg Boggs knows exactly what to do, she rescues him, takes him home to a real family, cares for him like any mother would.

This is the perfect Mother’s Day film if you’ve got toddlers in need of after-lunch quiet time. It’s been described by Rotten Tomatoes as a fun, entertaining animated superhero film and at the centre of it all is “one mother of a superhero”, says USA Today.

Voiced by Holly Hunter, mum Helen – aka Elastigirl – is happy to stay at home looking after her three children Violet, Dash and baby Jack-Jack, until her super talents are called upon.

She’s the main star here (after saving her husband in the first film), and to see her happily fly through the air with her three kids in tow as they save the Free World is just magic.

It’s an oldie, but will still bring a tear to your eye.

Mother Mary Taylor (played by Dee Wallace), recently separated after her husband left her to go holiday in Mexico with someone new, is left raising three children in their suburban Los Angeles home.

When her middle son, Elliott ,rescues an alien (accidentally left behind after his spaceship took off without him), hides him in his upstairs wardrobe and attempts to look after him, things don’t go to plan.

When they eventually show him to Mary – and by now both Elliott and ET are dying – she does what any mother would do. She shows unconditional love for her son by helping ET “go home”.

Toni Collette plays angst-ridden wife Sheryl Hoover in this wonderfully heartwarming drama about a dysfunctional family who band together for a common purpose.

That purpose is for Sheryl to allow her chubby, bespectacled daughter Olive (Abigail Breslin) to enter a children’s beauty pageant in California.

Yes, it’s one of the best science fiction movies of all time – and among the biggest grossing – but Linda Hamilton as Sarah Connor takes motherhood to the next level.

Let’s put aside Arnold Schwarzenegger as the T-800 and concentrate on Sarah Connor’s unhinged determination to help her son John save the future planet from destruction. Amazing mother!

Hiding her kids, including a newborn baby, from a post-apocalyptic world in which blind aliens inhabit the earth, Evelyn Abbott (played by Emily Blunt) is on a mission to give her kids the best chance at life.

At one stage, she hides them inside a sound-proof foundry while she goes out to find food. She fights aliens, and does whatever it takes to protect her kids.

Frances McDormand (who won multiple awards for her lead role) plays angry mother Mildred Hayes. We would all be her if put in the same horrific situation.

After her teenage daughter’s murder, and when police fail to make any arrests, she personally puts up billboards challenging the local authorities to do something.

“Raped while dying,” reads one billboard. “And still no arrests,” read another. “How come, Chief Willoughby? (played by Woody Harrelson),” asks the last.

The storyline takes on a life of its own, but mother Mildred remains focused, determined to find out who committed this crime.

Based on a true story, Sandra Bullock (who won an Oscar for best actress in a leading role) plays mother Leigh Anne Tuohy who adopts Michael Oher, a young star footballer from an impoverished background.

Enter Mrs Tuohy, who lets him know directly that he is talented enough to go to college and play football. She motivates him to be a better person, and in the end, she and he prevail.

Award-winning actress and mother of two Nicole Kidman plays the sweet-natured, traditional mum of a teenage son who has issues and questions surrounding his sexuality.

Directed by Australian actor Joel Edgerton, the film looks at gay conversion therapy and the role the parents play in supporting their children’s decisions.

It’s an oldie, but a great little flick, and it’s all about the Little family adopting a mouse (voiced by Michael J Fox) as a sibling for their only boy, George.

The mother (Geena Davis) here is an angel. Completely adorable. She doesn’t flinch that he’s a mouse, just makes sure she has all the right clothes, bedding and food for her little boy Stuart.

Even when things go wrong, Mrs Little is forgiving. At the centre of it all, there’s a message about adoption and fostering.

Hey, Mum! Dust off the toast crumbs, get out of bed and go watch a Mother’s Day classic movie