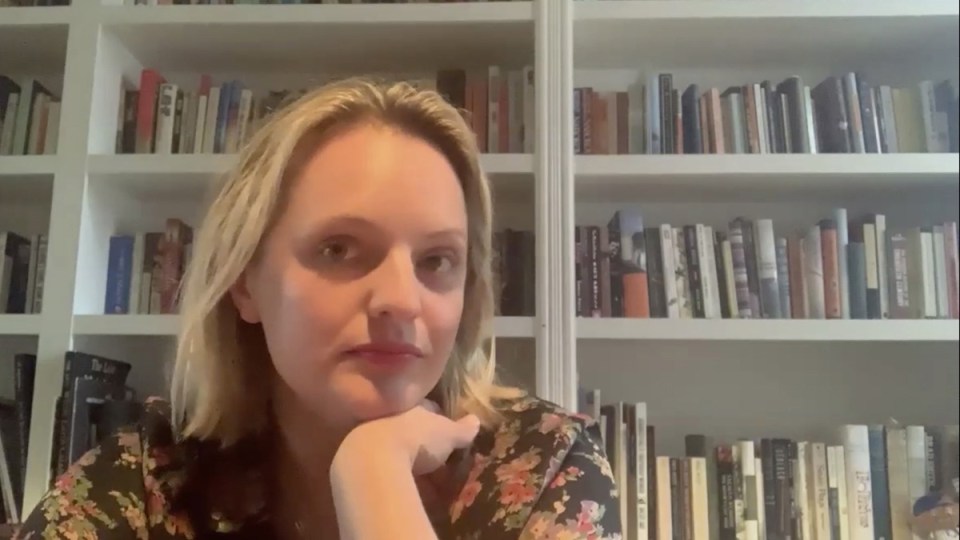 Over the years, a handful of high-profile celebrities, including Hollywood A-listers Tom Cruise and John Travolta, have been the public faces of the controversial, and very closed, Church of Scientology.

Now, in an interview with The New Yorker, the Emmy-winning star of The Handmaid’s Tale, Elisabeth Moss, has given a candid interview about her ties to Scientology.

Promoting her lead role in new Apple TV+ thriller Shining Girls, the 39-year-old was quizzed over a Zoom chat about her lifelong links to the church.

Moss’ parents Ron and Linda joined Scientology before she was born (they once played in a jazz band with Ron Miscavige, whose son, David, is the current head of the church).

“It’s not really a closed-off religion. It’s a place that is very open to, like, welcoming in somebody who wants to learn more about it,” she told journalist Michael Schulman in the latest May edition of the magazine.

“I think that’s the thing that is probably the most misunderstood.

“People can obviously hold in their mind whatever they want to, and I can’t control that. If it’s not that, it’s going to be something else.”

Scientology and her three-decade career

The New Yorker points out that while Moss downplays her lifelong association with the religion, she’s part of a small set of “second-generation Hollywood Scientologists” whose “network has played a role in her career”.

She first was cast in Girl, Interrupted, before playing the president’s daughter in The West Wing led her to eventually securing an ongoing role as Peggy Olson in the successful Mad Men series starring John Hamm.

Then came 2017’s dystopian hit The Handmaid’s Tale, in which she stars as an oppressed fertile woman who is ceremoniously raped in order to have children to populate a pure post-apocalyptic race.

And in between there were lead roles in various small budget and mainstream films including Shirley, Her Smell and The Invisible Man (2020).

So, as The New Yorker asked rhetorically:

“What’s an approachably cool pop-culture feminist icon doing in an organisation that its defectors, among other critics, describe as a dangerous cult?

“It’s tempting to imagine that she’s just culturally Scientologist, like a Jew who goes to temple only on Yom Kippur. And yet, according to a web site that tracks “service completions” listed in Scientology magazines, in 2017 Moss did a Purification Rundown, a detox treatment that involves prolonged heat exposure and ingesting large quantities of niacin.”

They dug back a bit further and found publicly available Scientology records claiming “Moss took the Hubbard Key to Life Course when she was eight and achieved the state of Clear when she was eleven”.

“I don’t want to come off as being cagey,” she replied when asked about Scientology.

“If you and I met, just hanging out as friends, I’m, like, an open book about it … I don’t want people to be distracted by something when they’re watching me. I want them to be seeing the character.”

Moss did credit Scientology with making her a skilled communicator growing up.

“Communication is something that I obviously use so much, not only in my job but in my interpersonal relationships as well,” she said.

“That is probably one of the No.1 basic things that I grew up learning and grew up using and use every day: the power of just being able to listen to somebody, of making somebody feel heard, of not belittling them for what they think or believe, even if you think it’s wrong.”

Former Scientologist and now critic, Australian Mike Rinder, who rose to become one of Scientology’s most senior international executives and an official spokesman, told TNY the communication angle was often used by members.

“That’s a fundamental concept that is sold to new people to get them into Scientology. You’ll hear a lot of Scientologists say, ‘It taught me to communicate’, because it’s a simple, uncontroversial thing.

“Lizzie is good at communicating her roles to audiences, so you can’t say that’s a lie. It’s a great line to use, because it’s one of those things that you can’t really challenge.”

Former Scientologist [TNY reports the church says she was “expelled”] from 2009 to 2013, American actress and producer Leah Remini has become one of the most outspoken critics of the organisation.

Through her 2016 documentary series (about 30 episodes) Leah Remini: Scientology and the Aftermath she produced and co-hosted, she interviews former members and former high-level former Scientology executives.

In a statement released at the time through American broadcaster A&E, Ms Remini said: “This series is about sharing the truth about Scientology. Truth born out of very personal experiences. Truth that is shocking, things I did not expect to find when I embarked on the journey of making these shows.

“For too long, this multi-billion-dollar organization bullied victims and journalists to prevent the truth being told. It is my hope that we shed light on information that makes the world aware of what is really going on and encourages others to speak up so the abuses can be ended forever.”

At the 2017 Television Critics Association Awards, Remini (nominated for her docuseries) and Moss (nominated for The Handmaid’s Tale) found themselves in the same auditorium.

Remini won an award and Moss reportedly left the room. She clarifies that incident, telling TNY: “I went to the bathroom. I wish it was more exciting than that”.

After Moss’s interview, critics zoomed in on the irony of Moss playing a downtrodden, sexually abused woman in Gilead.

“She’s an open book because recruiting/attracting new members is one of their missions. Cult members don’t know they’re in a cult. They recruit cuz [sic] they think they’re saving you and humanity,” wrote one observer.

Another said: “Can we please cancel all Scientologists? Starting with Elizabeth [sic] Moss. It is literally a cult of oppression. An actual ideology aligned with the bad guys of Handmaids Tale“.

“The absolute blind eye among you all is amazing.”

And this: “Elizabeth [sic] Moss telling critics of Scientology that it ‘is welcoming in somebody who wants to learn more about it’ is so funny because the main issue is getting out of it.”

And many echoed this sentiment: “There is no greater irony than Elizabeth [sic] Moss, a hardcore Scientologist, starring in The Handmaid’s Tale.”

When TNY asked her how viewers might “reconcile” the controversies surrounding Scientology and her Handmaid’s role, Moss replied:

“I would just encourage people to find out for themselves.

“I’ve certainly been guilty of reading an article or watching something and taking that as gospel … And obviously something like religious freedom and resistance against a theocracy is very important to me.”

Shining Girls fourth episode released on May 6 on Apple TV+