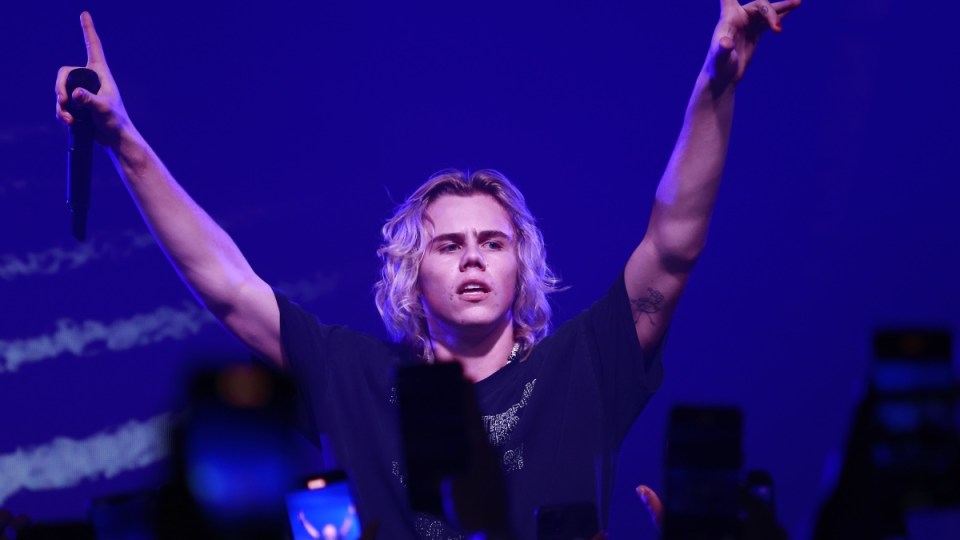 The Kid Laroi has won three APRA gongs in the 40th anniversary of the music industry accolades. Photo: Getty

The 18-year-old multi-talented performer has been named songwriter of the year for 2022, and won the peer-voted song of the year award for Stay, the global hit he co-wrote with Justin Bieber.

LAROI also claimed the prize for most performed in the hip-hop/rap category, for his song Without You.

“I really appreciate the support and I want to give a quick shout out to fans back home. I’m stoked to be on my way back and I can’t wait to perform the End of the World tour with you guys,” he said.

.@thekidlaroi has scored an APRA Music Awards trifecta 🏆🏆🏆
The 18-year-old has ended the night by taking home Peer-Voted APRA Song of the Year for STAY, the global sensation co-written with @justinbieber #APRAs pic.twitter.com/BXpU0cujqY

LAROI is currently on tour with upcoming dates in Mexico before he returns for shows in Australia.

Tones And I took home two awards, winning most performed pop work with Fly Away, and most performed Australian work overseas with her global hit Dance Monkey.

But on the 40th anniversary of the music awards, the gongs were not just for fresh-faced performers bursting with talent.

Angus Young and the late Malcolm Young won most performed rock work for Shot In The Dark, from their 17th studio album Power Up.

The brothers, along with the late Bon Scott, won a Gold Award at the very first APRA Awards in 1982 for AC/DC’s Highway to Hell.

London-based producer John Courtidis is also a two-time winner in 2022 with most performed Australian work and most performed dance/electronic work for Head & Heart, the Joel Corry and MNEK UK club hit he co-wrote.

Singer Genesis Owusu was named breakthrough songwriter of the year, a prize that went to LAROI in 2021.

The Ghanaian-Australian singer from Canberra was recognised for his debut album Smiling With No Teeth, which reached the ARIA albums chart’s top 30.

Vance Joy and Joel Little won the gong for most performed alternative work with Missing Piece, a song inspired by separation during the pandemic.

I think we've found what you're looking for @vancejoy & @iamjoellittle 🧩 😉
The boys are our Most Performed Alternative Work winners for ‘Missing Piece'.
The song is published by @mushroompublish obo WAU Publishing & @sonymusicpubaus #APRAs pic.twitter.com/h5uGqip9pa

The night at Melbourne Town Hall finished with a performance by The Hard-Ons with singer Tim Rogers in tribute to Chris Bailey, the late frontman of celebrated Australian rock band The Saints.

We are so proud to share that @TheWiggles are our 2022 recipients of the Ted Albert Award for Outstanding Services to Australian Music 💙💛 💜♥️ pic.twitter.com/4OsnLZzcAA

Songwriter of the Year – The Kid LAROI

Most Performed Country Work – Love Songs Ain’t For Us

Most Performed Hip-Hop/Rap Work – Without You

Most Performed Pop Work – Fly Away

Most Performed Rock Work – Shot in the Dark