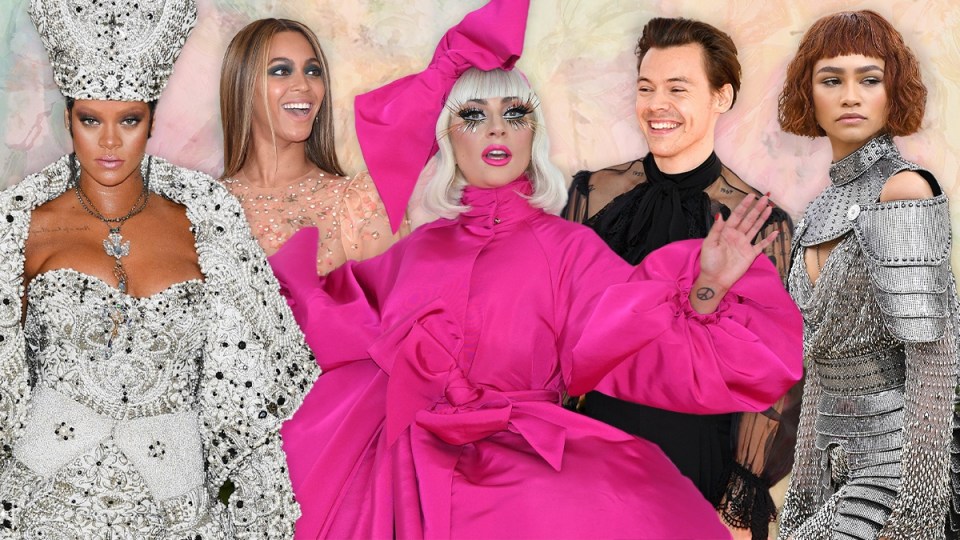 Tickets are $US30,000 per person, but that's not an issue here, so why did Hollywood's biggest stars fail to turn up this year? Photo: TND

Not every celebrity can turn on their heel and make it to every red carpet event on the calendar, but to miss the fashion equivalent of the Oscars – the 2022 Met Gala – is just wrong.

Known for her incredibly outrageous and on-point costumes that always make headlines, she was missing big time.

So was the Queen Bee of style, Beyonce, known for her opulent cover magazine photo shoots.

And what about former One Direction boyband darling Harry Styles, who smashed it out at the iconic US music festival Coachella this year in one-piece sequin and satin bodysuits?

Didn’t we all think it was his time to shine on the carpet?

Lady Gaga was in Las Vegas

Tens of thousands of Gaga fans thought she nailed this ensemble on the red carpet for the Met Gala’s Gilded Glamour theme after a tweet by a fake PopCrave account had Lady Gaga at the 2022 Met Gala.

The Sarah Burton-designed Alexander McQueen gown reminiscent of Elizabeth l that was featured … was in fact what she wore on the red carpet for the 2018 UK premiere of A Star Is Born.

Twitter and TikTok were sucked into thinking she was there, and fans kept retweeting her Alexander McQueen outfit and even showing red carpet snippets of her signing autographs with fans.

“She never misses,” echoed the sentiment of almost 53,000 users in less than an hour.

“lady gaga [sic] going viral at an event she didn’t even attend,” eventually wrote an astute observer. Another jokingly suggested she could win best outfit of the night.

Meanwhile, the Oscar-nominated Lady Gaga (House of Gucci) was using social media for a very different reason, posting her newly released song Hold My Hand she wrote for Top Gun: Maverick while busy performing in her Las Vegas residency at the Park MGM.

She even had time to catch up with Tom Cruise backstage with some cheek-kissing, saying: “Thank you for coming to the show last night. I love you my friend.”

Despite Euphoria star Zendaya delivering a show-stopping Met Gala performance in 2019 as Cinderella, E! Online reported she “had a good reason” for the no-show, saying she was in Boston filming sports drama Challengers alongside Mike Faist and Josh O’Connor.

“I’m gonna disappoint my fans here, but I will be working,” she told Extra last month.

“Your girl’s gotta work and make some movies.

“I wish everyone the best. I will be playing tennis,” she said.

As People reported, the singer and fashionista’s first baby is due, so Rihanna stayed in Los Angeles, “likely too pregnant to fly”.

Vogue, however, as host of the benefit of the Metropolitan Museum of Art’s Costume Institute in New York City on May 2, paid their “gilded” statue tribute to Rihanna, 34, after she had already graced the cover of its May issue.

After she and her partner A$AP Rocky, 33, announced they were expecting in January, she has taken fashion to next level, exposing her pregnant belly in photo shoots and fashion week events over the past five months.

As Vogue noted in its cover story, the superstar is “single-handedly rewriting the rules of pregnancy dressing with one jaw-dropping style manoeuvre after another”.

Harry sleeping it off after Coachella

We all missed Harry at the Met.

He took to Twitter on April 27 saying he “had the time of his life” at Coachella this year, and was spotted in Los Angeles in the days leading up to the Met.

Despite co-chairing the event in 2019 (so did Lady Gaga that year), he was a no-show.

All is not lost – he’s busy promoting a one-night-only show in New York on May 20 before his 2023 world tour, and he graces the Better Homes and Gardens magazine cover in June.

Yes, imagine if Beyonce decided her Gilded Glamour brief was re-imagining this 2013 advertisement for ticketing and entertainment website Priority O2.

Instead, Beyonce and her husband Jay-Z – she was seen disembarking a private jet in head-to-toe black tracksuit – were holidaying in Miami and on private islands near Florida’s coast, according to the Daily Mail.

If it’s any consolation, she’s a veteran of the Met, stepping out in 2008 in stunning Armani Privé when the theme was Superheroes, then six years in a row from 2011 to 2016.

Amal Clooney was in NYC

People reported Amal, a human rights lawyer and mother of twins with Clooney, was seen in New York on April 26, in the week leading up to fashion’s most important night of the year.

She spoke in support of Ukraine at an informal meeting of the UN Security Council in New York on April 27 and stepped out in style for dinner in Manhattan with her mother Baria Alamuddin.

Meanwhile, George Clooney was reportedly in Scotland on a multimillion-dollar private yacht.

This year, the couple opted to spend time away from the spotlight they so enjoy, arriving at an LA studio in T-shirts and tracksuit pants.

Earlier, as Elle reported, they were spotted in Bel-Air at a home construction site as they continue to house-hunt in California.