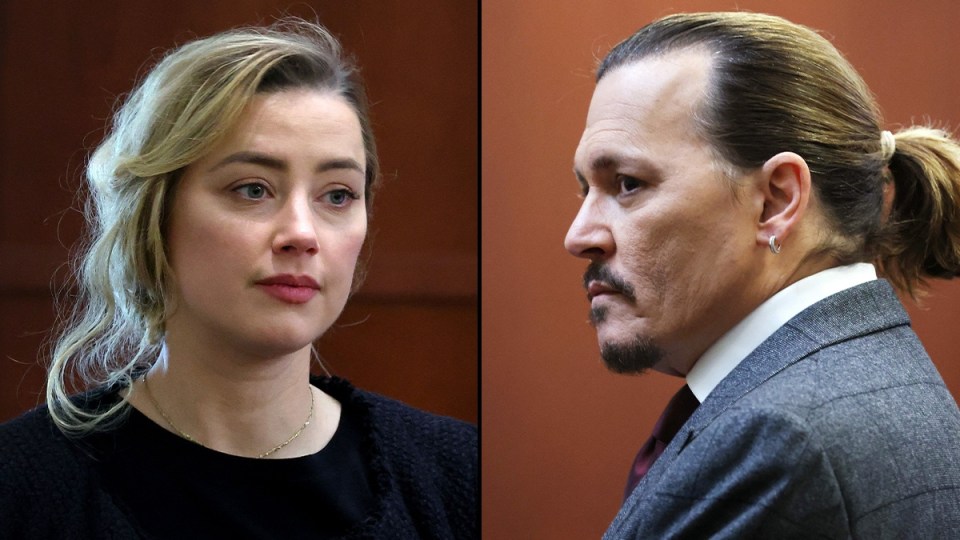 As Johnny Depp’s $US50 million ($70 million) defamation trial enters its fourth week in a Virginia courtroom, lawyers for his ex-wife Amber Heard have their work cut out amid an ever-increasing public backlash against their client.

Pirates of the Caribbean star Depp is suing Heard for libel after she wrote an opinion piece in The Washington Post in 2018 referring to herself as “a public figure representing domestic abuse”.

The article, ghost-written and legalled by the American Civil Liberties Union under Heard’s name, reflecting her role as an ACLU ambassador, doesn’t mention Depp by name.

His lawyers say the article defames him nevertheless because it is a clear reference to the highly publicised allegations Heard made when she filed for divorce in 2016 and obtained a temporary restraining order.

Although the libel lawsuit in Virginia is supposed to centre on whether Depp was defamed in the article, most of the past three weeks of the trial has focused on ugly details of the couple’s brief marriage.

The jury has heard evidence of other alleged assaults before and during the couple’s brief marriage, an expert witness on Heard’s diagnosis of borderline personality disorder and histrionic personality disorder, and lengthy text messages and video of Depp’s drug and alcohol abuse.

After four days of gruelling testimony in the stand that concluded on Thursday local time, jurors heard audio of a conversation between Depp and Heard in which she seemed to taunt him, suggesting he would not be believed or respected if he were to publicly cast her as an abuser.

“Tell them, I, Johnny Depp, I’m a victim of domestic abuse … and see how many people believe or side with you,” Heard says on the recording.

Depp has denied ever striking Heard. Heard’s lawyers say Depp physically and sexually abused her and that Depp’s denials lack merit because he was often drunk and high to the point of blacking out.

Either way, just 24 hours before Heard is set to take the witness box, an online petition to have Heard dumped from Aquaman 2 clocked three million signatures, with calls for the UK Game of Thrones actor Emilia Clarke to replace her.

The Change.org petition, created by US poet and writer Jeanne Larson in 2020 after Depp was dropped from his role in the Harry Potter Fantastic Beasts franchise, asks franchise executives to “do the right thing” and remove Heard from the Warner Bros sequel Aquaman and the Lost Kingdom.

Although most of the allegations Larson lists as reasons for her dumping are still to be decided by a jury – including that she “has been exposed as a domestic abuser” –  movie websites are reporting Heard, who plays Aquaman‘s love interest Mera, should be dumped.

Heard, 36, reportedly only gets 10 minutes of screen time and there was apparently no chemistry between the pair during filming.

In a post after shooting wrapped, director James Wan thanked his co-stars Jason Momoa and Patrick Wilson who had “worked so tirelessly and hard” to make his “little film”.

Wan didn’t mention Heard at all, but fans swiftly reacted with calls to “CGI” her out of the film, or re-shoot her scenes with someone else, otherwise it will “tank”.

What to expect in court this week

In what has become the biggest celebrity courtroom ‘soap opera’ drama in recent times, the US’s popular Court TV network gathered a team of experts to unpack how this week will unfold for Heard amid an intense social media backlash.

We know there will be closing arguments from Depp’s team, and maybe any lingering witnesses to call when court resumes on Tuesday (AEST), but Heard is expected to be the first witness for her defence.

Among the list of potential witnesses for Heard include her ex-boyfriend and Tesla CEO Elon Musk and the actor James Franco.

Replaying a snippet of Heard in 2016 after an alleged fight in their Los Angeles apartment before they split, former senior homicide prosecutor Bernarda Villalona told Court TV anchor and attorney Vinnie Politan it is going to be hard for a jury to have an open mind.

“What is a jury going to think about Amber? They’ve heard so much dirt about Amber, about her mental stability, about her prior bad acts … about how she leaves poop on people’s beds.

“There is so much that this jury has heard that it is going to be hard for when Amber gets up on the stand for them to give her a clean slate and be able to listen to her testimony with an open mind.

“What are we going to hear from this woman? Is she going to come back with the same story about the May 2016 incident, I highly doubt it … those cops have already testified and discredited her version of what she said in that deposition.”

Former prosecutor Joan Illuzzi-Orbon said Heard was going to start off being a calm, rational-sounding person in the witness stand.

“At times, I think she’ll even be very calm to the point of unemotional and then I think she’s going to rise to the occasion … once she’s cross-examined, the fire is going to come out and she’s going to show the emotion she felt at the time the events unfolded.

“That can go one of two ways … either she can look like she is an anger-driven person, or she’s going to come off as genuine and show raw emotion that the jury will relate to.

“It will be a matter of preparation for her, controlling her emotion and then showing a bit of her inner self to the jury.”

When asked what she was expecting from Heard’s testimony, Ms Illuzzi, who has represented victims of abuse in the past, said alleged attacks by Depp on Heard (including a three-day bender in which she alleges she was sexually assaulted and held against her will during their 2015 Australian visit) needed to be backed up by medical records.

She also discredited some of Depp’s legal team’s witnesses’ depositions from security personnel, who alleged they never saw any injuries on Heard.

“I was so unimpressed by them. To me they were not only loyal to him, they were actually enamoured by him. I don’t believe a word they say, even if they were telling the truth … because they appeared to be protecting him at all costs.”

Adds Ms Villalona: “She’s the only witness so far of what we know that can supposedly bring this evidence in front of the jury. So, just because you said it, doesn’t mean it happened … you have to come off credible”.

Entertainment and film website Deadline contacted Heard’s team about when she was likely to take the stand.

An industry insider “with connections to both camps” said: “It’s hard to see how Amber won’t prove to be a highly effective weapon against Depp in her own advocacy.

“Regardless of how they have tried to characterise her, she has been nothing but well composed and pretty conservative in court without having said a word.”

Judge Penney Azcarate has a pre-scheduled conference to attend from May 9 to12, so the trial will pause next week, reported Deadline.