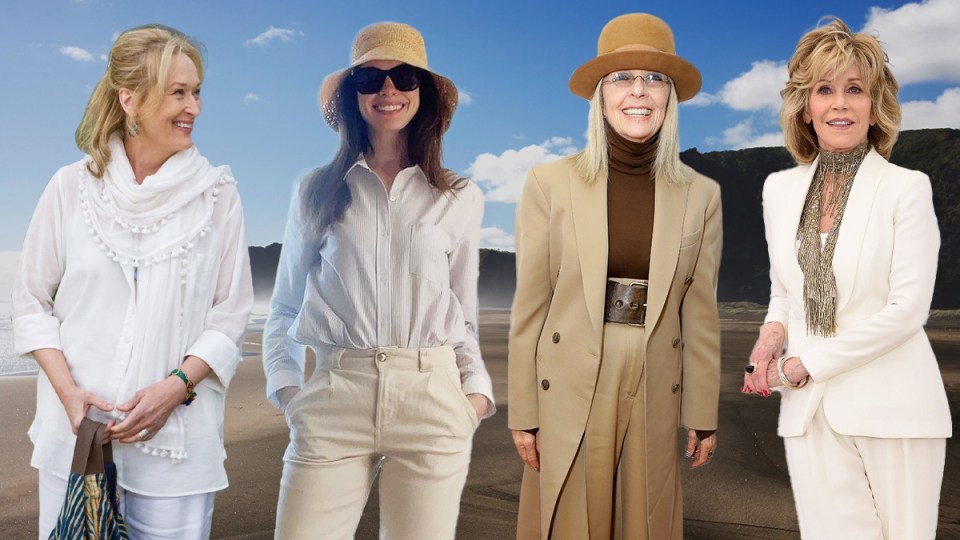 The term ‘coastal grandmother’ was coined by TikToker Lex Nicoleta, who started posting about the aesthetic in March.  Photo: Getty

Believe it or not, the latest fashion trend exploding on TikTok and Instagram right now is – wait for it – ‘coastal grandmother’.

Spreading across social media like wildfire, ‘coastal grandmother’ refers to the affluent, unbothered lifestyle that involves living by the beach and sipping mimosas at 3pm.

How did this become a thing?

The term ‘coastal grandmother’ was coined by TikToker Lex Nicoleta, who started posting about the aesthetic in March.

Ms Nicoleta explained in one TikTok, “If you love Nancy Meyers movies, coastal vibes, recipes and cooking, Ina Garten, cosy interiors and more, there is a good chance you might be a ‘coastal grandmother’.

“And no, you don’t have to be a grandmother to be a coastal grandmother. It’s for anyone and everyone.”

♬ This Will Be (An Everlasting Love) – Natalie Cole

Prime examples are Diane Keaton in Something’s Gotta Give and Meryl Streep in It’s Complicated – and yes, both of these films were helmed by Meyers.

The above TikTok video has had more than two million views and counting, while the hashtag #coastalgrandmother has over 22.7 million views on the platform as of Sunday (Australia time).

So, how do you become a ‘coastal grandmother’?

To dress as a ‘coastal grandmother’, you must embrace this “absolute staple” fashion piece: The button-down shirt.

“You can never have too many button-downs,” Ms Nicoleta said in one TikTok post.

Bucket hats, white linen and capri pants and sweaters in neutral tones round out the effortlessly chic ‘coastal grandmother’ wardrobe.

Ms Nicoleta told Good Morning America last week that the aesthetic charmed her because it was comforting and cosy.

“I was always drawn to this lifestyle that you see in a Nancy Meyers movie, or when you visit a relative that lives at the beach. There’s just this sense of cosiness and safety that comes along with it,” she said.

“It’s really just focusing on romanticising your own life, and cultivating little moments of happiness. Reading on your patio, or cooking in your kitchen, or making your morning coffee – it’s really in the details.”

Meyers’ films are an obvious choice for “cosy, coastal, comfort movies”, but Ms Nicoletta also recommended Monster-In-Law, The Big Wedding, Under the Tuscan Sun and The First Wives Club.

She even created a Spotify playlist titled ‘coastal grandmother’ for the full effect.

The playlist, which has more than 60,000 likes, features dreamy songs like L-O-V-E by Nat King Cole, The Way You Look Tonight by Frank Sinatra and My Girl by The Temptations.

The trend made so much noise online that Meyers responded to it.

“This article says the Coastal Grandmother aesthetic has garnered over 1 billion views on TikTok! Typo? That’s a lot of views for a pair of khaki pants, a GAP sweater and a bucket hat!” Meyers captioned her post on Instagram, which featured a picture of Keaton from Something’s Gotta Give.

The director tagged Keaton in her post, who also responded to the trend.

“FROM ONE COASTAL GRANDMOTHER TO ANOTHER, THANK YOU!!!” Keaton wrote, tagging both Ms Nicoleta and Meyers.

Along with the caption, Keaton shared a video that combined a scene of her character from Something’s Gotta Give, with snippets of Ms Nicoleta’s TikToks.

Not even celebrities can resist the viral TikTok trend.

Anne Hathaway, who starred in Meyers’ film The Intern, shared her best ‘coastal grandmother’ look on Instagram, which consisted of a crisp white button-down, beige capri pants and a bucket hat.

“I have been ready for #coastalgrandmother chic since before TikTok was born. May this moment never end,” Hathaway shared.

Meyers is working on a new movie, by the way.

The director has teamed up with Netflix on an ensemble comedy, which we’re sure will provide plenty of ‘coastal grandmother’ content.