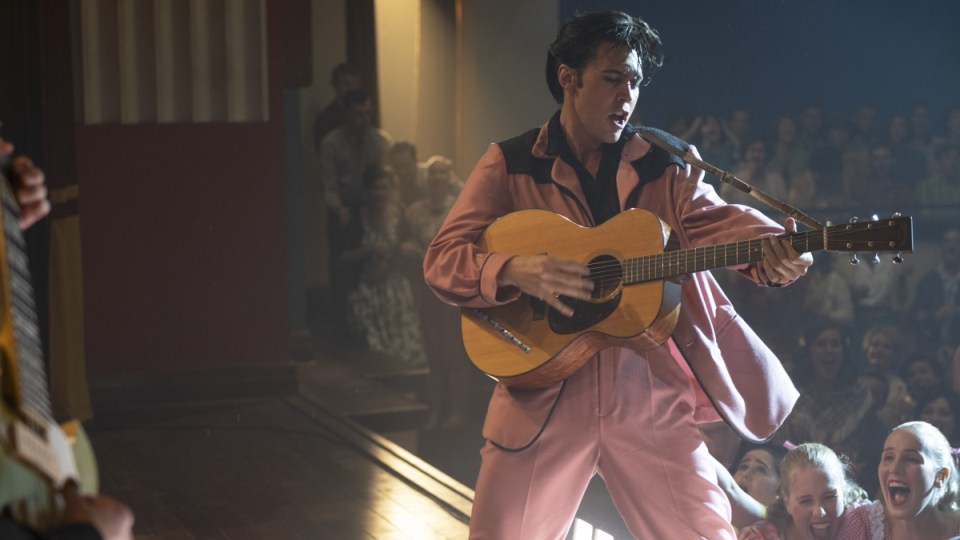 Austin Butler had voice coaching for a year before filming started, to get his voice ‘to be identical’ to Elvis's. Photo: Warner Bros

After years of bit parts, a successful stint on Broadway and a role as a murderer in a Tarantino film, Californian actor and singer Austin Butler had a moment of clarity about his next career move one winter evening more than three years ago.

It was Christmas 2018, and the 30-year-old was driving through Los Angeles with his ex-girlfriend Vanessa Hudgens (High School Musical).

The couple were listening to Elvis Presley’s Blue Christmas on the radio when Hudgens suddenly turned to Butler and said: “You should play Elvis.”

It struck a chord.

Soon afterwards, Butler got to work trying to secure the rights to Presley’s life story. But then he heard that Australian filmmaker Baz Luhrmann (Strictly Ballroom, Moulin Rouge, The Great Gatsby) was working on a script.

“It felt like the stars were aligning,” Butler said in an exclusive interview with Vogue published last week.

“I just said, I’m going to dedicate everything I have to this.”

And indeed he did.

Butler initially made an audition tape of him singing Love Me Tender in his bedroom that made him feel like he was an Elvis impersonator, before having a dream that his mother who died of cancer in 2014 was alive.

“I had this nightmare that my mother was alive again, but dying. And it felt so fresh and painful … I’d been watching all these documentaries and learned a couple of days prior that Elvis’s mum had passed away when he was 23, the same as me,” Butler recounted to Vogue.

“I thought he probably had nights where he woke up from nightmares like this. So what can I do with that?

“I sat down at the piano in my bathrobe and just started fiddling … I’d been practising Unchained Melody for a while, but I’d always been singing it to a lover.

He had reportedly been considering better-known contenders for the lead such as Miles Teller and Harry Styles, but he told Vogue “what I heard vocally, and more importantly, what I saw emotionally, was something that simply couldn’t be ignored”.

“From the moment I met Austin, he was carrying something of Elvis with him.

“He had a hint of the swagger, a touch of the sound.”

Butler’s preparation and the cast of Aussies

The Warner Bros drama is one of the most hotly anticipated releases of 2022, and has been eight years in the making.

Then it was delayed again as the pandemic hit.

That included Tom Hanks (who plays Elvis’s long-time manager Colonel Tom Parker) and wife Rita Wilson spending days in hospital on the Gold Coast as the first Hollywood celebrities to test positive to COVID-19 in early 2020.

Production was shut down for six months after the virus hit Australia and most of the cast left town.

He told Vogue he lived in virtual isolation for months in an ocean-view apartment on the Gold Coast, where the film was shot and post-production completed.

He created a so-called “crazy wall” of Presley’s life, an evidence board, and “made the entire place look like a detective film, where there’s images of everything connected with the strings and stuff”.

“I did have days of feeling lonely … and, at one point, I went three months without a hug. That was really rough,” he recalled.

“If I fly back [to the States], I’m going to lose my momentum. I’m going to be balancing real life and prep. Unless I immerse as much as I possibly can, I’m going to feel like a fraud.”

To get his voice “identical”, he committed to voice coaching for a year before they started filming.

He told The Hollywood Reporter: “When I began the process, I set out to get my voice to be identical. That instills fear. So that got the fire burning”.

Luhrmann told THR the film features Butler’s voice for the young Elvis and a blend of Butler and tapes of Presley for mid-life Elvis.

We also get to see Kodi Smit-McPhee’s next theatrical work after The Power of the Dog. He is cast as country-music star, friend and preacher Jimmie Rodgers Snow.

All eyes now on the GC red carpet for Elvis

Luhrmann, who will walk the red carpet with Butler and DeJonge on June 4 on the Gold Coast, says he’s developed a “true love of and a deep relationship with” the ‘Goldie’.

In a Universal Pictures statement on April 21, he said “the many artists and friends whom we have met along the way have made us think of it as a new creative home”.

“I’ve been quoted saying, and will continue to say, that I would recommend to any filmmaker in the world to come to this exciting place.

“The Gold Coast is bursting with the energy, creativity, good food and great people essential to making a movie.”

Queensland Premier Annastacia Palaszczuk said she met Luhrmann in 2019 during a trade mission to the UK to help secure the production for the Gold Coast.

“To now see it coming to life on the big screen is just incredible,” Ms Palaszczuk said, with the film generating 900 local cast and crew jobs and more than $130 million into the state’s economy.

“With world-class facilities like Village Roadshow Studios, experienced local crew, stunning locations and the support of Screen Queensland, we continue to show why the producers of high-profile films like Elvis choose our state,” Ms Munnich said.