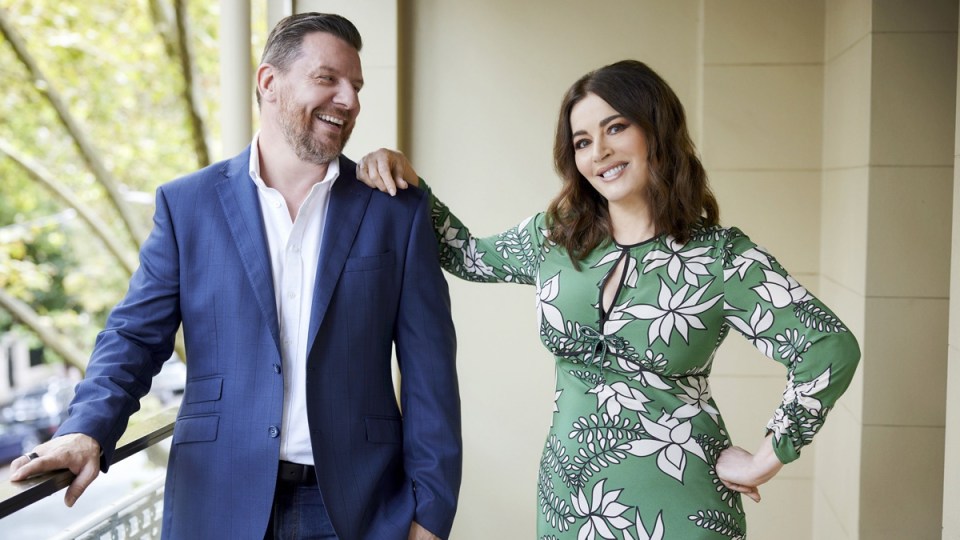 Nigella Lawson will join Manu Feildel at the table for a new season of My Kitchen Rules. Photo: Seven/Jeremy Greive

It has been almost six months in the making, but UK celebrity cook Nigella Lawson is finally calling Australia home as she joins a revamped My Kitchen Rules.

Speculation had been mounting in recent weeks that the co-hosting gig for the troubled cooking show might go to Lawson, 62, after she arrived in Melbourne last month for the International Food and Wine festival.

An industry insider told The New Daily in December that Nigella would be headhunted to sit at the table alongside chef Manu Feildel, describing her as “front runner” with “mass market” appeal.

And on Sunday the Seven network confirmed she had got the job, with fans taking to social media soon afterwards to express their joy at the appointment.

“Finally I now have a reason to watch the show,” wrote one fan on Nigella’s Instagram.

“Well MKR you’ve got me back, so long as you keep the nasty drama out of it and make it about cooking,” wrote another.

Nigella ‘stoked’ to be back on our screens

Lawson, who has published 12 cookbooks and hosted her own shows as far back as 1999, wrote she was “stoked” to be returning to Australia for the show.

“It’s official! Am very excited to say that I’m shortly back in Australia,” she said on Sunday.

“And, if I may borrow an Australian term, I’m stoked!

“Going to restaurants can be a treat, but for me, the true story of food is told through the cooking we do at home,” Lawson said in a statement from Seven.

“So, to have the chance to champion home cooks and be given the intimate privilege of being invited into people’s homes to eat their food fills me with gratitude and excitement in equal measure!

“I’m so looking forward to working with Manu too.

“Although he’s a chef and I’m a home cook, the fact is we both just want to eat good food. I feel I’ve got a lot to learn from him, but just know we’ll have a lot of fun in the process.”

‘The lovely Nigella Lawson at my side’

With disgraced former co-judge Pete Evans falling into obscurity after spruiking anti-vaccine messages and unproven COVID-19 treatments (for which he copped hefty fines), the Seven network says the 2022 season of MKR will take the show “back to the original recipe” and with just six couples.

Seven chief executive James Warburton told news.com.au late last year he was confident the show’s redesign, which would move it away from “gossip and bitchiness”, would be successful.

“It was dominant for a decade, people loved it. So we’re bringing it back with a short, sharp run. We’ve shown what we can do with The Voice, so we’re confident it will work,” Mr Warburton said.

“It just chased a certain direction in my personal view. I sort of came on board as the last two seasons were going to air, but it chased villains and gossip and bitchiness and all that kind of stuff.

“(It had) really extended dinner parties. We’d blown it up to 60 episodes, so it was a massive commitment.”

He said he can’t wait to sit next to Nigella at the dining table.

“I’m very excited to be sitting back at the head of the MKR table and even more thrilled to have the lovely Nigella Lawson at my side.

“As MKR judges, we make the perfect team with our years of experience in professional and home kitchens respectively. And as lovers of delicious food and a fabulous dinner party, I can promise you we’re also going to have a lot of fun. Bring it on!”

The show won a Gold Logie in 2014 for best reality television program, but its ratings plummeted and its fans deserted it in recent years.

Allegations of bullying, cheating and love trysts – along with Evans’ association with the brand – detracted from the cooking element and the last show went to air in March 2020.

Fast forward to today and former MasterChef judge Matt Preston has been confirmed as the third MKR co-host, with celebrity chefs Colin Fassnidge and Curtis Stone to return as guest judges.

But for now, it’s all about Nigella.

“Awesome. Hopefully this show will be about food again. Last season was horrible, no-one wants to see mafs [Married At First Sight] like drama,” wrote one fan.

“Welcome back to our screens and shores!” said another.

“I’m sure you (Lawson) will bring the warmth and positivity (as you always do) to the show so the focus is on the food rather than anything more trivial.”

‘A reason to watch the show’: Fans to return as Nigella joins Manu on My Kitchen Rules