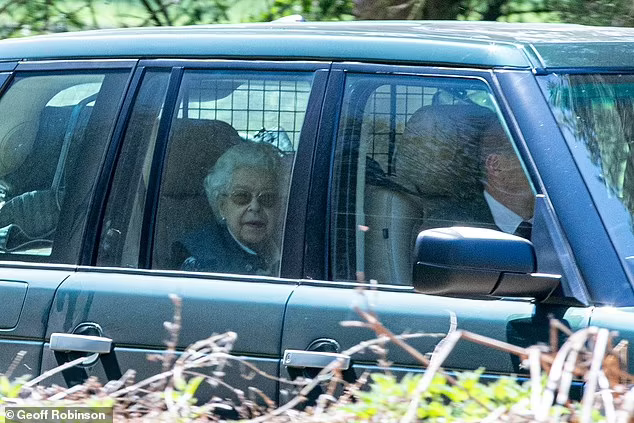 It's a no-fuss celebration this year, as Queen Elizabeth continues to retreat from official royal duties. Photo: Twitter

In a much-loved, five-bedroom cottage on the Sandringham estate on the Norfolk coastline, Queen Elizabeth II has spent the day at Wood Farm in what is expected to be a quiet weekend of celebrations with family and friends to mark her 96th birthday.

According to royal editor for the Mirror Russell Myers, the Queen will celebrate her birthday this year with a “tea party with family and friends”.

He describes her helicopter journey from Windsor Castle back to Wood Farm as “poignant”, given the cottage was home to her beloved late husband Prince Philip after he retired from royal life in 2017.

Nestled on a secluded part of the estate that looks out over the sea, the cottage is where the Queen, Philip and their children went to relax and escape from the formalities – and spotlight – of royal life for more than 50 years.

Prince Philip – who died in April 2021 at age 99 – loved the cottage, in part because it is close to the sea, the Queen said when hosting a rare public event at Sandringham in February.

One royal source told Myers on Thursday (AEST): “The Queen is taking a well-earned break and will mark her birthday very modestly this year.

“She feels very at home at Wood Farm and close to her beloved husband and it’s wonderful she was able to travel to enjoy the getaway.”

Myers reported the Queen “may be joined by the Duke and Duchess of Cambridge and their three children, but Prince Charles and the Duchess of Cornwall are understood to have remained at their Scottish home, Birkhall, after Easter.”

Myers said the Queen might visit her Royal Stud, request a drive around her 8000ha (20,000-acre) estate which has been in the family since 1862, and take a look at Prince Charles’ organic farm development.

The Queen was expected to spend the day at Wood Farm cottage, one of many on the estate, which has also been described as a personal sanctuary where she spent her first Christmas since Philip’s death in April 2021.

The palace told People that the Queen will be spending her birthday privately, in a place full of reminders of Prince Philip.

The cottage was “modified in recent years” to make it easier for him to get around, after he retired from public life.

Former bodyguard Ken Wharfe said the cottage has a fantastic outlook from the front across the amazing landscaped gardens.

“She doesn’t have to be monarch there,” added a former staffer. “She can be Elizabeth rather than the Queen.

“I think the Queen’s approach to birthdays very much embodies her keep calm and carry on attitude,” said Emily Nash, the royal editor at Hello! magazine.

This birthday comes during the Queen’s platinum jubilee year, marking her 70 years on the throne.

The day marks yet another milestone in a tumultuous period for the monarch, who has sought to cement the future of the monarchy amid signs of her age and controversy in the family.

After recovering from a bout of COVID-19 earlier this year, the Queen’s public appearances have been limited by unspecified “mobility issues”.

But the Queen got an early birthday present last week when grandson Prince Harry and Meghan, the Duchess of Sussex, paid her a joint visit for the first time since they stepped away from frontline royal duties and moved to California in 2020.

Prince Harry, in an interview with NBC News Today show host Hoda Kotb, said his grandmother was “on great form”.

Though he added he wanted to make sure she was “protected” and had “the right people around her”.

One royal insider described Harry having “breathtaking arrogance” and said his comments will no doubt exacerbate the rift within the royal family, questioning how a short visit to his grandmother after living in the US for two years was enough to make sure she was “protected”.

With Kotb, Prince Harry discussed his relationship with his grandmother and said they talk about things she “can’t talk about with anybody else”.

And although the Queen will be celebrating her birthday on April 21, according to her grandson, she may not be very excited.

“I think after a certain age, you get bored of birthdays,” Prince Harry joked.

Meanwhile, his older brother the Duke of Cambridge will continue to take on more official royal duties, commemorating this year’s Anzac Day service and laying a wreath on behalf of the Queen at this year’s ceremony at the Cenotaph.

Kensington Palace announced Prince William, second in line to the throne, will also remember Australians and New Zealanders who lost their lives in conflict by attending a service of thanksgiving at Westminster Abbey.

The two events fall on April 25, and will follow a dawn service at Wellington Arch at London’s Hyde Park Corner attended by the Queen’s cousin, the Duke of Gloucester.