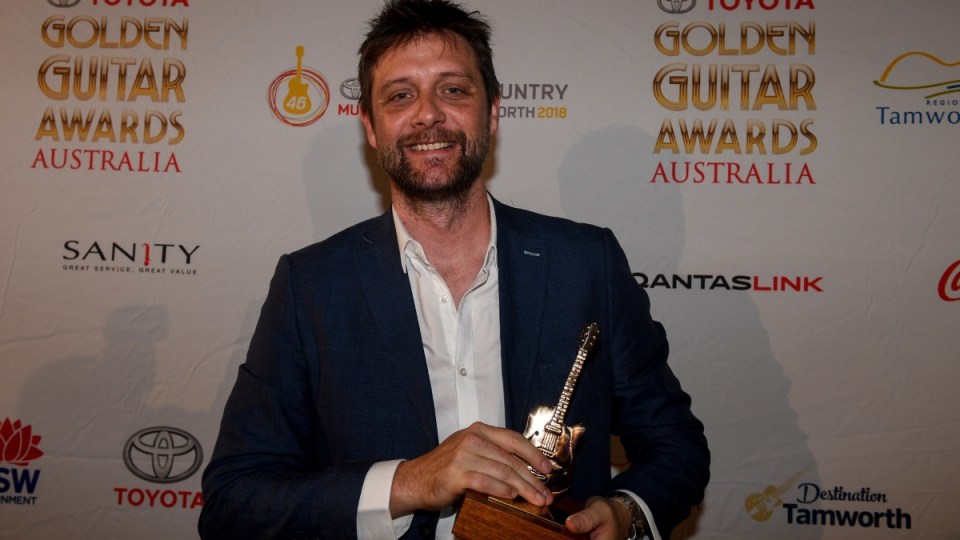 One track on Shane Nicholson’s latest album is called How to Write a Song.

He sings dryly about experiencing love, heartbreak and yearning, then wrapping it all up in melody and playing it in a minor key.

The country singer-songwriter proved he has got the right formula, taking out the top categories at the 50th Golden Guitar Awards in Tamworth on Wednesday night.

His song And You Will Have Your Way was named song of the year and single of the year.

Tamworth local Ashleigh Dallas was crowned best female artist, while her song with Luke O’Shea, Long Way ‘Round, won video of the year.

Country legend Troy Cassar-Daley was voted best male artist and his album The World Today was the top-selling album.

Cassar-Daley has now won a record-breaking 40 Golden Guitar awards over the course of his career, more than Slim Dusty.

A history making win at the 2022 Golden Guitars… Troy Cassar-Daley has now won more GGs than any other artist. #TCMF2022 pic.twitter.com/drC5rBUL8G

The Golden Guitars’ executive producer Peter Ross said it was a privilege to bring back the awards, which are a landmark event at the Tamworth Country Music Festival.

The awards have been marred by the pandemic in recent years, and the festival was postponed in January due to rising COVID-19 infections.

Mr Ross said the event was a moment to reflect on the resilience and strength of country music in Australia.

Announcing the 2022 New Talent of the Year is @Darlinghurst for "Where Do We Go"#GoldenGuitars pic.twitter.com/JlDso2teOk

Album of the year: Living in Colour, Shane Nicholson

Contemporary country album of the year: Kids on Cassette, The Wolfe Brothers

Traditional country album of the year: Songs From Highway One, Adam Harvey

Song of the year: And You Will Have Your Way, Shane Nicholson

Single of the year: And You Will Have Your Way, Shane Nicholson

Top-selling album of the year: The World Today, Troy Cassar-Daley

Winner of the Country Music Capital News Group or Duo of the Year is @Wolfe_Brothers #GoldenGuitars pic.twitter.com/w4c2t0uYY1

Group or duo of the year: The Wolfe Brothers

Bluegrass recording of the year: Black Crow, The Weeping Willows

New Talent of the year: Darlinghurst