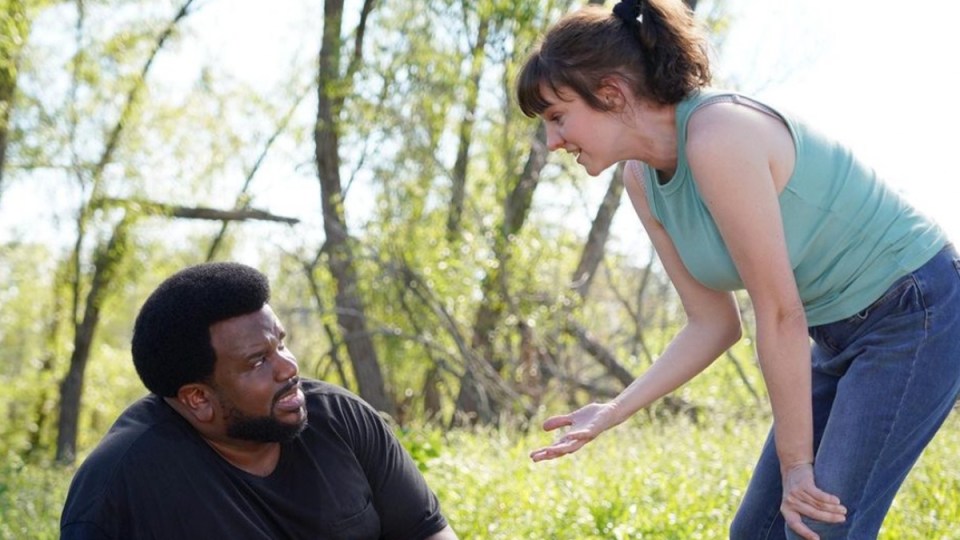 Seven years ago, Australian comedian Claudia O’Doherty was doing the regular international stand-up circuit and posting her videos on YouTube.

Then she got one hell of a lucky break.

Along with talent and years of hard work, O’Doherty, then 31, daughter of Mental as Anything founder and Mambo artist Reg Mombassa, got noticed by Trainwreck stars Amy Schumer (and 2022 Oscars co-host) and Bill Hader, who saw her online videos and wanted to cast her in the film.

“I have to work with this girl. She’s so funny,” Schumer reportedly said at the time.

Speaking to The New Daily from her Los Angeles base on Thursday, O’Doherty recounts the moment the A-listers reached out.

“I’m so grateful to Amy Schumer for giving me my first Hollywood job. After she saw some videos I made for Channel 4 in the UK, she offered me a role in her movie Trainwreck,” she says.

After landing that brief appearance as a baby shower guest who initiates a hilarious parlour game on the couch (her’s was secretly admitting she ate a whole tub of ice cream once), she moved to LA and got well and truly noticed.

“It was a big change. I started going to restaurants a lot more,” she reveals.

Director Judd Apatow then cast her in Netflix comedy-drama Love (2016-2018), writing a part especially for her, all the while making sure she kept her Australian accent.

“On the last day of shooting my little role in Trainwreck, Judd said he was working a on a show for Netflix about relationships, set in Los Angeles. He asked if I’d like to play a character on that show.

“It changed my career a lot because it meant I moved to LA.

“Luckily for me, Judd seems to understand that people are funnier when they’re speaking in their own accents, so I got to keep mine,” she says.

A CV that keeps growing

Putting aside her breakout film role, during the past decade she’s worked on up to 25 television series, getting noticed when it matters and confirming her quiet achiever status.

She went on to join Schumer’s writing team for nine episodes and cast in four episodes in 2016 for comedy series Inside Amy Schumer (in one of her sketches she plays an incompetent, lustful snake doctor) as well as continuing her role in Love.

She has starred in period pirate comedy series set in 1717 Our Flag Means Death (2022), voiced animation series Wild Life (2020) and hugely popular Bluey (2020), and she got cast as an airline rep in Inbetweeners 2.

In 2019, it was busy. She played a YouTube social media influencer in Sarah’s Channel and a peak-hour commuter in comedy Squinters.

More recently she was a producer on one episode of Schumer’s gentle (and sometimes tragic) comedy drama Life & Beth (on Stan), appeared as a news anchor in the Charlize Theron, Seth Rogan flick Long Shot and scored top billing in supernatural thriller Extra Ordinary.

And now, she’s the co-star of Stan’s latest offering about catching big pythons and killing them for money in new series Killing It.

From the creators of Brooklyn 99, and starring US comedy legend Craig Robinson, O’Doherty plays Jillian, a down-on-her-luck Uber driver who introduces Craig – who plays a divorced father with dreams of making it rich – to the bizarre world of snake hunting.

“I’m so excited for people to see this show, and for everyone to see me wearing the worst jeans in the history of the world,” she wrote on her Instagram on April 6.

Writers and executive producers Dan Goor and Luke Del Tredici said they wanted to create a show that would explore “America’s quasi religious obsession with entrepreneurship and wealth”.

“We also wanted it to be funny … really, really funny.

“Plus, we wanted it to have big snakes.”

“I don’t know who I beat out for the role [The Sydney Morning Herald reported she beat several prominent American comedians], but I think they envisioned someone more famous than me playing the part.

“We shot the show in the swamps of New Orleans and working with Craig and the other actors was so much fun,” she tells TND.

In one of O’Doherty’s early scenes, she’s driving Robinson along a highway when she suddenly pulls over, grabs a hammer and smashes a python to death on the side of the road.

“When I auditioned, I told them I’m comfortable with snakes. Well, not to a crazy degree, but I’m just really scared of rats, so if something is an enemy of a rat, I’m excited … I do think it’s kind of ridiculous, the [American] connection of Australians to reptiles.

“It makes me laugh, it’s so stupid. But it is true, I am comfortable around snakes,” she told the SMH on April 9.

O’Doherty’s character lives in her car and, as she tells us, Jillian has many gig economy jobs “but is still very much in debt, so her dream is mainly to be able to afford food and shelter”.

“The show makes comedy out of the lengths people need to go to to make their dreams come true,” she says.

“So, we tried to make a show that could deliver both.”

O’Doherty, raised and educated in Sydney, would love to work back home in Australia and hopes a second season of Killing It is on the drawing board.

In the meantime: “I encourage people in Australia to offer me jobs.”

Killing It premieres on Stan on April 15 (the first episode has already been released).

Forget Crocodile Dundee! Meet the quiet Aussie star killing it in US series about hunting snakes