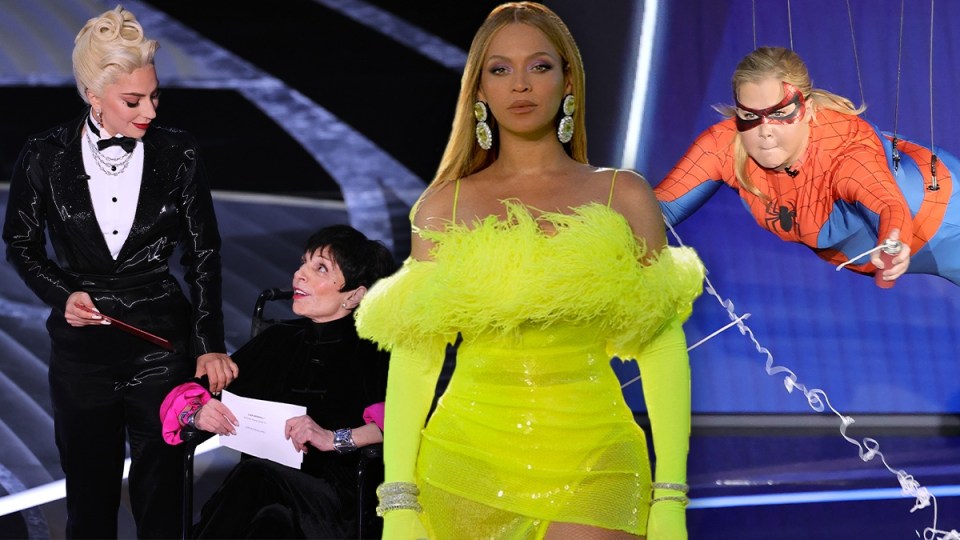 Way before any of the drama took place, Beyoncé opened the show with a gorgeous performance. Photo: TND

After Will Smith’s shocking behaviour at the 94th Academy Awards, we wouldn’t blame you for forgetting what else happened during the ceremony.

His attack on Chris Rock over comments about his wife Jada Pinkett Smith stunned viewers, casting a huge shadow over the annual awards ceremony.

From The Godfather tribute to new Oscar categories falling flat, here is what else happened at this year’s Academy Awards.

It kicked off with a (Beyoncé) bang

Way before any of the drama took place, Beyoncé opened the show with a gorgeous performance of Be Alive.

Dressed in tennis ball green, Beyoncé performed her song live in Compton, Los Angeles, where the Williams sisters were coached as young girls.

It marked Beyoncé’s first performance at an awards show in five years.

For the first time since 2018, the Oscars featured a host.

And they tackled everything in their opening speech, from the spectacular collapse of the Golden Globes to Florida’s controversial ‘Don’t Say Gay’ bill.

“This year the Academy hired three women to host, because it’s cheaper than hiring one man,” Schumer joked after they were introduced to the stage by DJ Khaled.

“But I’m still excited to be hosting, representing Black women who are standing proud,” Hall said.

“Yes, and I am representing unbearable white women who’ve called the cops when you get a little too loud,” Schumer added.

To close their opening speech, Sykes told everyone to expect a great night.

“And for you people in Florida, we’re going to have a gay night.”

The three women then chanted the word “gay”, which received massive applause from the audience.

Sticking to mostly light jokes, the trio took part in a gag where they all sported costumes from their favourite movies.

Sykes, who dressed as Richard Williams and who thought everyone was dressing up as a character from King Richard, scolded her co-hosts for dressing up as other movie characters.

Schumer literally dropped in on the Oscars stage in full Spider-Man gear, hanging from the ceiling. Hall dressed up as Venus Williams, as Tammy Faye.

For the first time in Oscar history, everyday movie lovers were allowed to vote in the Fan Favourite and Oscar Cheer categories.

The two new categories were introduced in the hopes of upping viewership, which is on the decline.

At a glance, letting everyday people vote on the most popular films of the year is a fun idea.

But it was people on Twitter who got to vote.

If you’re unfamiliar with the platform, anyone who uses Twitter can tell you how easily things can snowball into a big, fat mess.

Fans hoping for a Spider-Man: No Way Home win were brutally disappointed by the almighty power of the Zack Snyder fandom.

Snyder’s zombie movie Army of the Dead won the Fan Favourite gong, while his Justice League cut took home the most cheer-worthy honour.

In the Fan Favourite category, Army of the Dead was followed by Cinderella and the lesser-known Minamata in third place.

The latter stars Johnny Depp. It appears his passionate fans are eager to propel the star back into the good graces of Hollywood after he was accused of abuse by his ex-wife Amber Heard.

Instead of the bells and whistles you would expect, the top five films in each category were presented in slideshow form. The response? Lukewarm.

The presentation received small applause before the broadcast cut to an ad break.

Legends of the silver screen

The Oscars paid its respects to The Godfather on Sunday by celebrating the drama’s 50th anniversary.

“I feel moments like this should be sincere and brief, and I’m so grateful for my wonderful friends to come here to help me celebrate with you,” Coppola said of Pacino and De Niro.

“This project that we began 50 years ago with really the most extraordinary collaborators, many of them legends and so many of them that I can’t take the time to list them all, but you know them all well.”

He continued, “So I’m going to only thank two from the bottom of my heart.”

The director personally thanked Mario Puzo, the author of the Godfather novels, as well as producer Robert Evans.

John Travolta and Uma Thurman danced The Twist, while Jackson spoke about the film’s meaning.

Gaga accompanied the Cabaret star on stage as she used a wheelchair, taking her hand as the crowd cheered them on.

“Do you see that? The public, they love you,” Gaga told Minnelli.

When Minnelli, who has won four Tonys, two Grammys, an Emmy and an Oscar, said she didn’t understand her notes, Gaga told her: “I got it.”

“You know how I love working with legends,” Gaga said. “And I’m honoured to present the final award of the evening with a true show business legend.”

Gaga noted that Minnelli was “celebrating the 50th anniversary of Cabaret,” and filled in for the star when she appeared to struggle with her notes.

“I got you,” she told Minnelli just before the nominees were read.

But that was far from the only award CODA won.

Troy Kotsur became the first deaf man to win an Oscar when he was awarded Best Supporting Actor for his performance as fisherman Frank Rossi in the family drama.

Will Smith overshadowed the Oscars. Here’s what else happened during the 94th Academy Awards