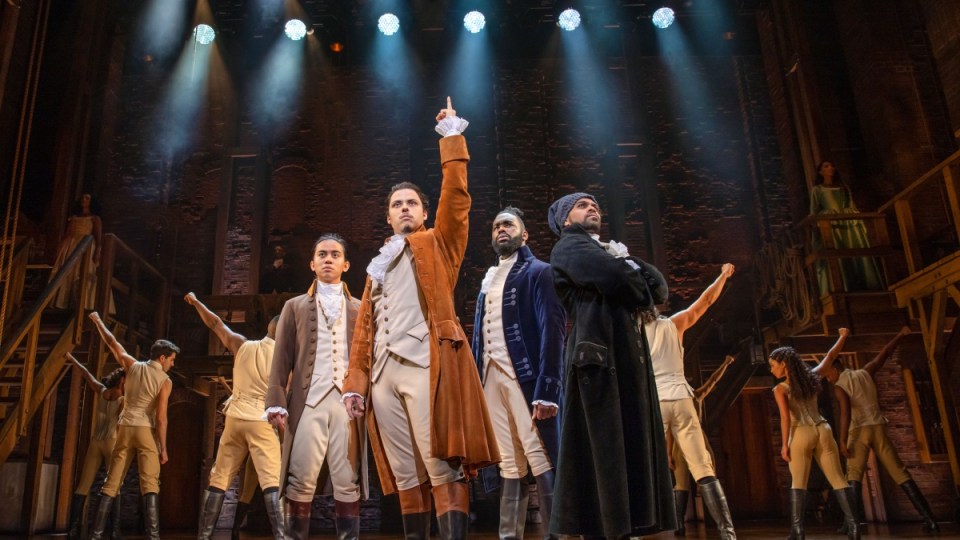 When the musical opened on Broadway in 2015, it had a multimillion-dollar advance in ticket sales, reportedly taking in $30 million before its official opening. Photo: Daniel Boud

The worldwide hip-hop US musical blockbuster Hamilton has lit up Melbourne like the Fourth of July after wrapping its Sydney season last year.

Performing on a warm autumn night to a who’s who of celebrities, entertainers and politicians, the 36-strong ensemble cast left nothing in the tank at Thursday night’s Her Majesty’s Theatre premiere.

No one could be prouder of the Australian production and its incredibly talented singers and dancers than the original Broadway producer of Hamilton, Jeffery Seller, who spoke at the curtain call immediately following the nearly three-hour epic and while the standing ovation was still clapping out.

“How lucky are we?” he asked the dizzying crowd, noting Melbourne was just a little like Broadway with not one, but three international live theatre productions on offer – Moulin Rouge, Harry Potter and the Cursed Child and Hamilton.

He also called out one Sammy J, comedian, writer and current host of the breakfast show on ABC Radio Melbourne.

Sammy J performed at the same Melbourne International Comedy Festival as Lin-Manuel Miranda, the American rapper who wrote the script and score and starred as the title character, and its director, Thomas Kail, in the original 2015 Hamilton on Broadway.

It was 2006 and it was at Her Majesty’s Theatre. The pair performed their show, Freestyle Love Supreme, and Sammy J won the festival’s best newcomer award for his show Sammy J’s 55 Minute National Tour.

Needless to say the rest is … ah … American history, as they went on to create Hamilton, a fast-paced recount of founding father Alexander Hamilton and his revolutionary journey.

“It was an incredible night,” said Melbourne comedian Sammy J, who was grinning from ear-to-ear as he got a nod from a Broadway legend.

Melbourne comes out of two-year hibernation

Sitting front and centre in the dress circle was Sally Capp, Melbourne’s Lord Mayor and self-described “number-one champion” for the city, who has worked tirelessly with a dedicated team to keep her beloved city afloat amid COVID and lockdowns, and now to watch it reignite as only the entertainment capital of Australia can do.

Speaking to The New Daily during the show’s intermission, and perhaps on behalf of the entire audience, she said it was “an absolute thrill to see amazing artists showcasing their talents.”

“Melbourne might have been the city with the most days in lockdown, but now we’re the city with the most events!
“We’re immensely proud of our theatre scene here in Melbourne – it’s a coup to have three extremely high-regarded shows on at once.”
Mayor Capp said the team at City of Melbourne had worked incredibly hard to bring the buzz back to city.
“We have not done it alone, we have some truly remarkable, resilient and creative people here in Melbourne, from traders and business owners, to creatives and entrepreneurs,” she said, as nearby streets around the theatre precinct were overflowing with al fresco diners, many lured back into the CBD by some of the cheapest parking ever seen in Melbourne.

What is it about Hamilton that gives it global appeal?

Hamilton, inspired by the 2004 biography Alexander Hamilton by historian Ron Chernow, has become the sold-out musical across North America (and London, Germany and now Australia), not only for its theatrical brilliance, but as the must-see for students and teachers of American history.

The official Broadway synopsis reads: “Hamilton is the story of the unlikely Founding Father determined to make his mark on the new nation as hungry and ambitious as he is.

“From bastard orphan to Washington’s right-hand man, rebel to war hero, a loving husband caught in the country’s first sex scandal, to the Treasury head who made an untrusting world believe in the American economy.

Some may argue watching a story about the beginnings of America, the Revolution and confronting slavery may not resonate with a global audience.

But indeed it does. For many reasons.

Miranda told the New York Times, that while the founding fathers were all white, the lead roles are intentionally played by people of colour.

“This is a story about America then, told by America now, and we want to eliminate any distance. Our story should look the way our country looks.

“Then we found the best people to embody these parts. I think it’s a very powerful statement without having to be a statement,” says the Encanto songwriter and director of tick, tick… BOOM!.

So what Miranda does is cleverly weave that narrative as an approachable force for all, using the beat of hip-hop, rap and soul to recount the birth of America in the 1700s.

“How Hamilton achieves this then-is-now effect could itself be said to qualify as historic, at least on the progress-challenged continuum of the American musical,” writes Ben Brantly in one of the first 2015 reviews in the New York Times.

“In telling the story of Hamilton – and confreres that include George Washington, Aaron Burr and Thomas Jefferson – via rap and R&B ballads, this sung-through production sounds a lot like what you’d hear if you turned the radio to a mainstream pop station.

Pointedly, the songs could be performed by Kanye, Drake or Beyonce.

Or any musical talent in Australia.

Added Mayor Capp: “I loved … discovering how many of the cast members were Australian, it really showcased the breadth of the homegrown talent we’re so lucky to have.

“My favourite song is The Room Where It Happened. To me, Melbourne is now the room where it all happens.

“Melbourne is back, baby!”

Just like Broadway, it’s a feast of live shows as Hamilton hip-hops its way to Melbourne