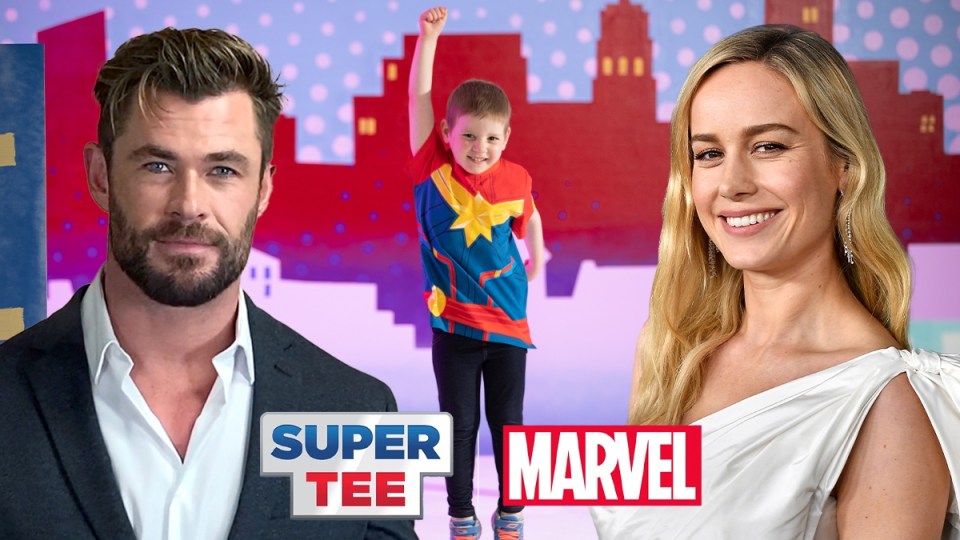 Brave Isla was diagnosed with leukemia last year and after treatment, she runs around like a ‘little superhero’ in her suit.

It’s not every day two of the biggest stars in Hollywood get to use their legendary superhero status to help children to be brave while battling life-threatening illnesses.

But that’s exactly what Australian actor Chris Hemsworth (Thor) and Captain Marvel‘s Brie Larson have done, as they encourage kids in hospital to kit up and wear the new Marvel edition Supertee to “channel their own strength and courage during what may be their toughest battle”.

The Supertee, a special medical garment which is MRI and PET scan friendly and designed with open underarms for thermometer access, bypass tubes and lines, was the brainchild of Sydney tradie Jason Sotiris back in 2018, after his own daughter Angela battled a rare cancer for several years.

“The idea for the Supertee came to me while comforting my daughter Angela, who was being treated for a cancer called Langerhans Cell Histiocytosis,” he says.

“I felt helpless not being able to do the simple task of putting clean clothes on her with IV drips, chest monitor cables and central lines making it impossible.”

Now, in a collaboration with Disney, the Supertee has gone next level, with two designs based on Marvel characters Captain America and Captain Marvel.

In a video message – with just the right Avengers musical backing track – released on March 10, Hemsworth and Larson speak from the heart.

“Know what it means?” asks the Thor legend.

“The Supertee, Marvel edition. It means you’ve officially achieved hero status,” says Larson, who stars in The Marvels out early next year.

Former child actress and Room Oscar-winner Larson, 32, doesn’t have children, but has previously spoken of her traumatic childhood in Sacramento, witnessing her parents’ emotional divorce, revealing she does have a little taste of an understanding of how complicated it is to be a parent.

“We already know you’re super tough, but when you put on your Supertee, everyone is going to think how brave and courageous you are. You are the greatest and the strongest,” says the Byron Bay-based father-of-three and Thor: Love and Thunder hero.

“When I put on my suit, my costume in the Avengers it makes me feel like I can take on anything.

“The Avengers will be behind you every step of the way.”

Mr Sotiris says the Disney franchise “played a huge role in his family” during Angela’s illness – and included a trip to Disneyland – so the collaboration on Supertee: Marvel Edition is something of a full circle moment for him.

Angela Sotiris was just one year old when scans found tumours throughout her body. One night while waiting for a nurse to come, Jason Sotiris tried to change her into clean clothes.

It was difficult and stressful for Angela, so the idea was born.

A prototype was created with guidance from nursing staff, investment funds were found and the Supertee was launched at Angela’s Sydney hospital in 2018.

Now, there are more than 13,000 Supertees in hospitals around Australia to help give already brave kids additional courage, and Mr Sotiris’s dream is to have a Supertee available for every child that needs one.

“The Marvel designs take the Supertee to a whole new level and will empower children to connect with the bravery and strength of the superheroes they know and love,” Mr Sotiris says.

Parents of children who are wearing the Marvel edition Supertee say it’s a “life-changer” and has made their sick children “less afraid”.

Rebecca Eakins, mother of four-year-olds Jayden and Jaxson, who were diagnosed with cerebral palsy and epilepsy, tells The New Daily the Supertee is a medical garment “disguised as a superhero outfit” which has been a game-changer in her household.

“The design of the top is perfect for when they are hooked up to all the wires and cords. So much easier to put on and take off again.

“It also means we no longer need to lift Jayden’s top up, exposing his belly, to feed him through his PEG, we can now run it through the side.

Ms Eakins says Jaxson has had one surgery and has another in the near future, making the Supertee top “an absolute game changer”.

“I really hope that when other children put this top on, they feel extra courageous, they feel like a true superhero that can conquer anything and fight,” she says.

Senior vice president and managing director for The Walt Disney Company in Australia and New Zealand, Kylie Watson-Wheeler says she hopes their collaboration “uplifts the hospital experience” and eases stress for families.

“We’re delighted to see the imagination and storytelling at the heart of Disney, and the strength and courage of our Marvel superheroes, bringing joy and comfort to children and families when it’s needed most.

“We hope this special collaboration with the Fair Fight Foundation on the Supertee: Marvel Edition uplifts the overall hospital experience and inspires kids to feel better and be brave like their favourite superheroes.”

To gift a Supertee: Marvel Edition or make a donation, head to supertee.org.au for more information.

‘You are the greatest and the strongest’: Avengers superheroes in the good fight for sick kids