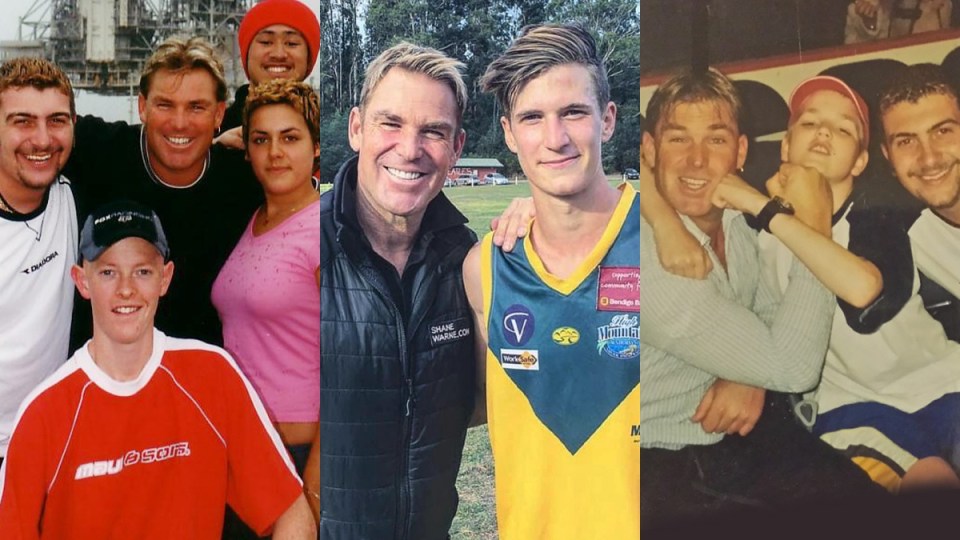 Shane Warne visited Black Saturday survivors and had a close relationship with Challenge, which supports children with cancer. Photo: TND

A few days after Victoria’s devastating Black Saturday bushfires, the late cricket legend Shane Warne travelled to the disaster zone of Kinglake, where dozens of people lost their lives, to see if he could be a shoulder to cry on.

There he found teenager Aiden Buchanan, 13 at the time, standing among hundreds of survivors at the Whittlesea Relief Centre set up 27 kilometres from ground zero.

He walked up to him, touched him on the shoulder, and gently asked: “How you going, buddy?”

Still in shock, Aiden shed tears for the first time after losing his brother ‘Macca’ Mackenzie, 15, his sister Neeve, 9, and his uncle Danny Clark, 37, when fire engulfed his grandparents’ Kinglake home on February 7.

It was an act of kindness that sparked years of friendship and mentoring, and it was just one in a long line of behind-the-scenes endeavours by Warne that the wider public and worldwide fan club really didn’t know about.

Warne, 52, died of a suspected heart attack on March 4 while staying with four friends at the five-star Samujana Villas resort on the island of Koh Samui in Thailand.

When Warne caught up with Aiden in 2016 during a segment for sport reality TV show The Recruit, he told the Herald Sun: “I gave my word to the family I would stick by him and mentor him and come up and help him out and watch him play footy.”

After the shocking news of Warne’s death, local Victorian MP Danielle Green gave an insight into what he did behind the scenes of highly public life after Black Saturday.

“Most of all he was kind, caring and generous.

“I met Shane Warne after Black Saturday when he took Aiden Buchanan and the Kinglake community under his wing.

“He never came with fanfare or ceremony, but simply brought his humour, kindness and humanity to lift the spirits of those who had lost so much.

“Warnie’s own family must be simply devastated, but so too his Kinglake family.”

Chief executive officer of Melbourne-based organisation Challenge – set up to support kids and families living with cancer – David Rogers OAM spoke to The New Daily on Monday, revealing the 25-year friendship he had with Warne, and what the cricket legend meant to the charity.

“Whenever I had a sick kid, I could ring him, and he’d go straight to FaceTime, or he’d be available to go see them. He was an amazing man,” Mr Rogers said.

“Shane was engaging constantly. It was his greatest quality. His capacity to engage with anybody. It didn’t matter whether you were a superstar or a hobo on the street, he gave people equal time if he had it.

“I’m still very sad … I only saw him two weeks ago. We gave each other a big hug. He was about to play in a golf tournament in America, for the 24 GOATs (Greatest of All Time) of world sport.

“He was to play golf against Michael Jordan, Tom Brady. He was in that league. I asked him what the chances were of me getting two tickets to auction for a fundraiser.

“To his credit, he organised the tickets within four days, ringing [the organisers in] London.

Warne’s trip of a lifetime

In 2003, Warne was invited by Challenge to travel with a group of 10 sick children to the US for the Trip of a Lifetime while the cricket great was out of the game for 12 months [Cricket Australia found Warne guilty of taking a prohibited diuretic drug].

Mr Rogers said he was a “delight” to be with, and built a rapport with the kids that stood the test of time.

He invited them into his hotel room to watch movies and share food (and would put the shower on to sneak a quick cigarette).

He stood in the Disneyland queues and was cool with wearing Mickey Mouse ears.

He fell asleep during the Celine Dion concert in Las Vegas (even though he was a huge fan).

He let the kids put his hair in short ponytails, and he got out onto the tarmac at NASA with them all.

“The kids thought he was the best. He was the best guy you’d ever meet. He didn’t hide anything,” he said, adding they all stayed in touch long after the trip.

Mr Rogers recounts his friendship with Chris, one of the teenagers with terminal cancer.

“Shane and I drove to Sale in 2007 [in Victoria’s East Gippsland] when one of the little boys was dying, up and back in a day.

“He sat with Chris and chatted. Chris knew he was dying … they were just good mates. He communicated with the kids regularly.

“It was what Shane did on his own. It wasn’t for public viewing.”

The charities who benefitted from his star attraction

Mr Rogers says Warne was inspired by Challenge to start the not-for-profit celebrity charity the Shane Warne Foundation in 2004, which closed in 2017 after a Consumer Affairs Victoria (CAV) investigation into its finances.

“He was very genuine. I helped him numerous times. I am really saddened it didn’t do what he had dreamed it would do.

“His intention was true”.

Friend and broadcaster Eddie McGuire wrote about the “other side of the spin king” on Sunday in a first-person piece for the Herald Sun, describing Warne as a “giver”.

“When Warnie’s pride and joy, the Shane Warne Foundation, was wound up his last play was to renovate the home of Will Murray, a schoolboy football prodigy, who became a quadriplegic after diving off a pier down the bayside in Warnie’s stomping ground,” McGuire wrote.

“It was only part of the millions of dollars he contributed to those in need. He donated his baggy green to bushfire victims.

“The people of Galle in Sri Lanka never forget his contribution to the rebuild of their stadium and town after the tsunami.”

Mr Rogers said Challenge was the first recipient of funds from the foundation, and they bought a bus.

And while Warne’s charity faded, he continued to travel the world making appearances for major fundraisers, as well as out of the spotlight on home soil for families going through hard times.

Melbourne father of three Rick Foley fondly remembers the night Warne turned up to a fundraiser organised by friends in 2000 for his son Cayden, now 24, who was diagnosed with spinal muscular atrophy after he was born.

“He was very generous with his time and made it his business to learn more about Cayden and his diagnosis,” Mr Foley said.

“Not only was he generous with donations of auction memorabilia, it was his willingness to spend time with us and everyone there that night.

“He wasn’t arrogant, or looked like he didn’t want to be there, he just seemed to fit in and talk to anyone. When he spoke, everyone listened. He definitely went overtime and showed his whole personality. He was humble and at the same time oozed that superstar aura.

“At the end of the day, it was clear that the night was not about him but more about what he could do for us as a family.”

Added Mr Rogers: “I had a genuine love for the man and I will be indebted to him for the rest of my life.”

‘The kids thought he was the best’: The side of Shane Warne you didn’t know