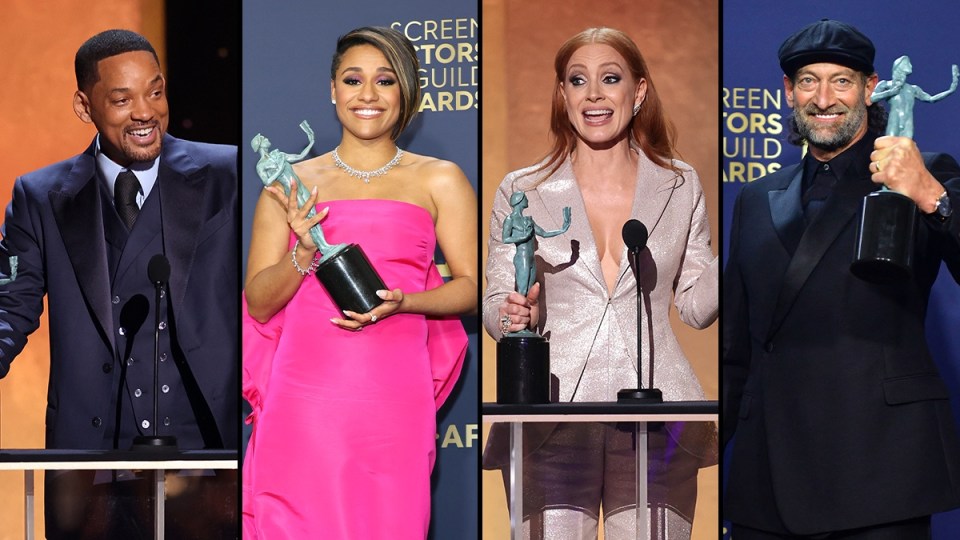 Just when you think your favourite film star is a frontrunner for an award, sitting near the stage bracing to hear those magical words – “and the winner is” – it turns out to be the dark horse in the category.

Your heart breaks for them. After all that hard work to bring a movie to the big screen. It happens every year – there’s always a surprise winner.

On February 27, the Screen Actors Guild Awards were held in Los Angeles, back with all the colour and movement from the red carpet to high fashion, to catching up with old mates and listening to teary speeches.

Unlike the increasingly unpopular Golden Globes, the SAG winners are seen as the frontrunners who will take home the gold statuettes on Oscars night on March 27 at LA’s Dolby Theatre.

Deadline reckons the Oscars race has been “upended”, with long shots such as CODA and The Eyes of Tammy Faye surprisingly winning key categories.

But with only two SAGS in supporting categories going on to win Oscars last year, and with three awards nights squeezed in over the next two weeks – Directors Guild of America Awards, the BAFTAs and the Critics Choice Awards all within 24 hours of each other – the race to win gold has a long way to go.

Let’s break it down.

The SAGs don’t have the Best Picture category, but it does have the top film prize of Outstanding Performance by a Cast in a Motion Picture.

It went to the Apple original film CODA, a drama about a deaf family from Massachusetts in the US.

Jane Campion’s Netflix psycho-drama The Power of the Dog (up for a massive 12 Academy Awards) wasn’t even nominated, but won a Globe back in January for best picture.

So what are its Oscar chances after months of hype and publicity?

Winning the top prize at SAG has led to big Oscar-winning moments for films like Spotlight (2015) and Parasite (2019).

‘‘Though CODA looks to be in a much stronger Oscars position than previously, history is against the family drama,” says Variety, because it’s missed some key Oscar nominations like best director or editor, “which are important precedents”.

So, we should assume The Power of the Dog‘s position as best picture frontrunner is unchanged.

Favourites: The Power of the Dog, Belfast

Best actor in a leading role

Will Smith is one step closer to an Oscar after taking home a SAG award for best actor for his brilliant performance as Venus and Serena Williams’ father in King Richard.

His competition in the category is fierce though, as he’s up against Benedict Cumberbatch (The Power of the Dog), Andrew Garfield (tick, tick…BOOM!), Denzel Washington (The Tragedy of Macbeth) and Javier Bardem (Being the Ricardos).

Twenty years after Smith’s first Oscar nomination for Ali (2001), which he ended up losing to Washington for Training Day, Smith could become the fifth Black man to win lead actor, according to Variety.

The dark horse is Cumberbatch.

We know Academy members love The Power of the Dog with its swag of nominations. Hollywood insiders reckon he’s due for a gold statue after previously being nominated for The Imitation Game.

Best actress in a leading role

This is where it gets hard.

Jessica Chastain (The Help, Zero Dark Thirty), won her first SAG for playing a tele-evangelist in The Eyes of Tammy Faye.

In her acceptance speech, she was “so nervous”, almost as if she wasn’t expecting the great honour, sharing the category with Hollywood royalty including Nicole Kidman (Being the Ricardos), Olivia Colman (The Lost Daughter), Kristen Stewart (Spencer) and Penelope Cruz (Parallel Mothers).

Deadline says Chastain wasn’t “at all a predictable winner for a movie that underperformed at the box office, opened early in September, and hasn’t yet translated into a lot of wins to date for the star”.

But her win has catapulted her to frontrunner, and, like Smith, won a SAG for the first time for also producing the film (being an actor entrepreneur), and not waiting around for Hollywood to hand deliver a killer role.

Best actor in a supporting role

His portrayal of an effeminate young man working at his mother’s inn who falls into the lives of George and Phil Burbank, two brothers who own a ranch in Montana in 1925, is a compelling, intense piece of work.

Critics say Smit-McPhee is the secret weapon in The Power of the Dog and is destined for Oscars glory, despite Troy Kotsur (CODA) taking home the SAG award in this category.

He’s up against Kotsur, Ciáran Hinds (Belfast), Jesse Plemons (The Power of the Dog) and JK Simmons (Being the Ricardos).

Best actress in a supporting role

Ariana DeBose won a SAG for her portrayal of Anita in Steven Spielberg’s West Side Story, and it was expected.

“The Afro-Latina actress continued her reign as the favourite in the category, where she is expected to win an Oscar exactly 60 years after Rita Moreno became the first Latina to do it in the exact same role,” wrote Deadline.

She’s up against Judi Dench (Belfast), Kirsten Dunst (The Power of the Dog), Aunjanue Ellis (King Richard) and Jessie Buckley (The Lost Daughter).

As Deadline is quick to point out, “before Oscars balloting begins on March 17 there is still plenty of time to shake up the race, and with 20-plus guild awards and other kudos events between now and Oscar night, there is the potential for lots of momentum building …

‘Fear factor’: Property outlook sours as banks predict record price plunge
France can ‘trust me’ after subs rift: Albanese
Trans prisoner loses bid to have sentence reduced after jail rape
Second big bank follows CBA with hefty interest rate rise
Kyrgios fined $14,500 for Wimbledon spit
Carbon credit scheme to be reviewed: Bowen
Before they return to the kitchen, here’s what your MasterChef favourites have been up to
Today's Stories

Countdown to Oscars 2022: Who will win after SAG awards set the benchmark