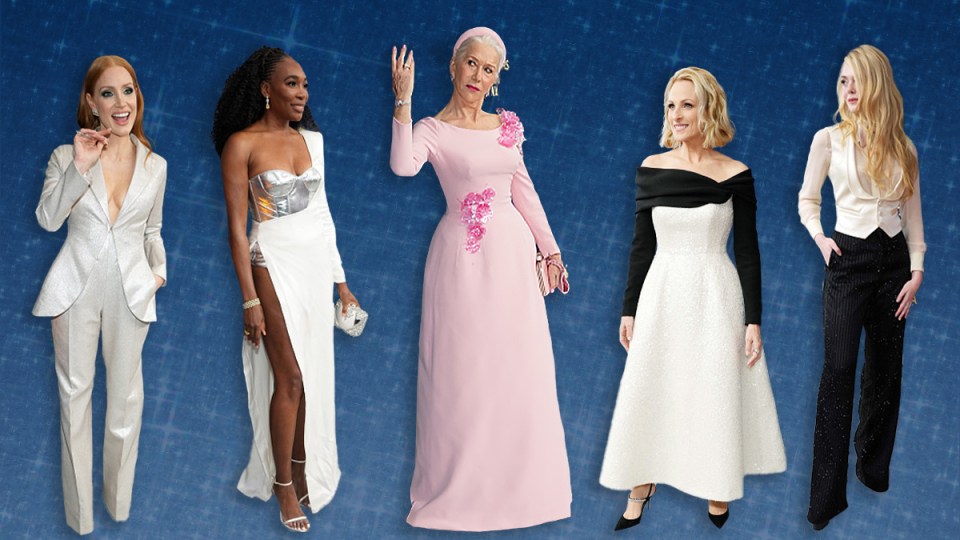 There was a lot of black, silver, a splash of pink and suits galore as Hollywood’s first major televised, in-person awards show for the season returned to light up Hollywood.

Broadcast live from The Barker Hangar in Santa Monica, the first time the show has not been held at the Shrine Auditorium in Los Angeles since 1997, the 28th Screen Actors Guild Awards red carpet (known as the silver carpet for sponsorship reasons) was a treat for the entertainment world.

Arriving for an 8pm start on February 27 local time, a who’s who of the best and brightest stars of film and television walked the carpet before heading inside to feast on the sit-down dinner of Australian Michelin star chef Curtis Stone.

With no afterparty in line with COVID-19, hundreds of guests and nominees all enjoyed delicacies such as mint and quinoa salad, sweet potato with curry, salmon rillettes with lemon and dill, accompanied by chilled Taittinger Champagne and a few cheeky wines.

Jessica Chastain (The Eyes of Tammy Faye), Elle Fanning (The Great) and Mira Sorvino went for the pants suit.

Will Smith (King Richard) and his wife Jada Pinkett Smith complemented each other with matching, dark blue satin, while Australians Nicole Kidman (Being the Ricardos) and Cate Blanchett (Don’t Look Up) competed with each other for the safest long black dress option.

Some teary speeches mentioned the Russian invasion of Ukraine, while others chose to highlight the unfolding conflict with gowns designed in Ukraine’s yellow and blue flag colours, like Spider-Man actress Greta Lee.