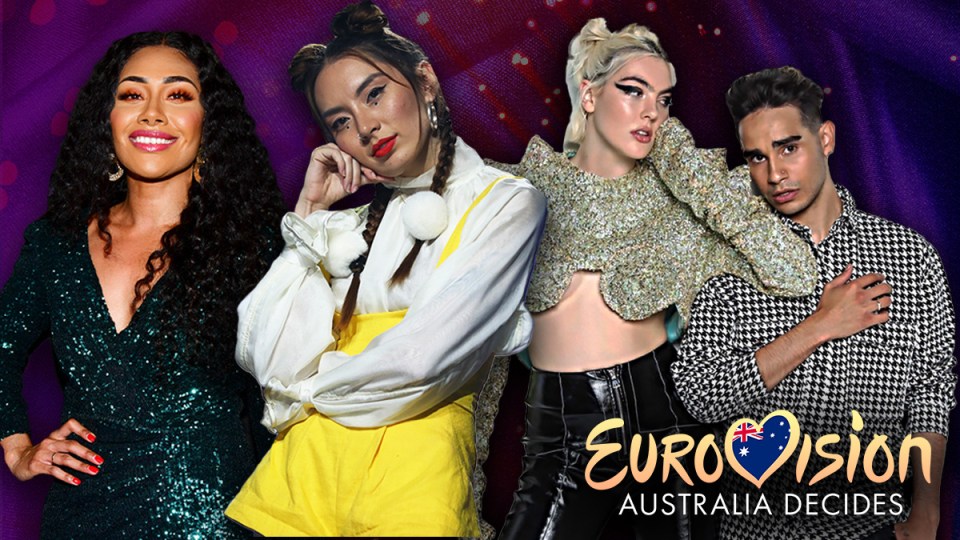 Eleven acts are vying for a chance to represent Australia at the 2022 Eurovision Song Contest. Photo: TND

The 2022 Eurovision Song Contest is already shaping up to be a controversial one after organisers announced Russia will not be allowed to participate, a day after saying it will.

The European Broadcasting Union (EBU) said in a statement Saturday (Australian time) that the inclusion of a Russian entry at contest in Turin in May would bring the contest into “disrepute” after Russia’s invasion of Ukraine.

Eurovision had previously said it intended to allow Russia to compete but faced strong criticism from state broadcasters in countries including Iceland, Finland, Norway and the Netherlands.

Last week, the act chosen to represent Ukraine withdrew after facing scrutiny over a reported 2015 visit to Russia-occupied Crimea.

As for Australia, our entrants will be revealed on Saturday night.

Eleven standout acts will perform their original songs for the chance to represent Australia at the contest in Turin, Italy.

Returning hosts Joel Creasey and Myf Warhurst will take you through the finale when Eurovision – Australia Decides is broadcast live from the Gold Coast.

They will be joined by I’m a Celebrity winner Dylan Lewis in the brand new Green Room, giving fans an even closer look at Australia’s Eurovision action.

From voting details to where you can watch the reveal, here’s what we know about this year’s Eurovision – Australia Decides.

The  Australian contenders and their original songs

The six-piece girl group said their pop anthem is about being “confident, fierce and owning who you are.”

“We wanted to perform a song that left us feeling a sense of empowerment and Bite Me definitely does that.”

2) Erica Padilla – To The Bottom

“To The Bottom is pretty much my life story,” TikTok wildcard entry Padilla said of her “triumph song”.

“It’s about pushing yourself to achieve your goals and doing whatever it takes to not fall back down to your rock bottom.”

Moore received a standing ovation from all four judges on The Voice Australia last year after he performed The Prayer by Andrea Bocelli and Celine Dion.

The audition says it all.

4) Charley – I Suck At Being Lonely

Charley’s song, which she wrote two and a half years ago, is about her biggest heartbreak.

“Being able to turn something so dark into something beautiful is a really special moment for me,” she said.

Like his fellow finalists, Lambrou has grown up watching Eurovision with his family.

He first appeared on our radar after he auditioned on The X Factor Australia in 2015 as a 17-year-old.

6) Sheldon Riley – Not The Same

As The Voice Australia fan-favourite said, there’s already a little bit of Eurovision magic in his music and fashion.

The Australian Idol alum, who competed on the very first season of the show, made her musical comeback in 2020 after a five-year hiatus.

She described the Eurovision Song Contest as the “Olympics for singers”.

Jonze has returned to Australia Decides after competing for the top spot in 2020. Unfortunately, the song contest that year was scrapped due to COVID-19.

The artist said her song is a celebration of our “resilience and the little steps that lead to big change”.

9) Isaiah Firebrace and Evie Irie – When I’m With You

Firebrace, a Yorta Yorta and Gunditjmara man, rocketed to international stardom after winning The X Factor Australia in 2016 with his smash hit single It’s Gotta Be You.

No stranger to Eurovision, Firebrace famously represented Australia in the contest in 2017 with his original single Don’t Come Easy.

“I’m incredibly proud to be doing this with Evie – she’s so unique and so special,” Firebrace said.

“Wait until the world gets to know her like I have.”

Voyager band member Danny Estrin said getting the chance to represent Western Australia and showcase their keytar-driven brand of heavy music is “one of the most exciting and surreal opportunities to ever come” their way.

Performing on Saturday night is a huge honour for York, who is beyond excited to take the stage.

“The song is all about believing that dreams do come true, and I feel like mine really are right now!”

During the opening night show on Friday (not televised, unfortunately), a jury of artists and industry experts voted for their favourite performance.

The public vote, meanwhile, makes up half of the overall vote.

The act and original song that receives the most points will go on to represent Australia in May.

Public voting kicked off late on Friday and will remain open until 9.45pm AEDT on Saturday, 26 February.

Have your say by texting your favourite song number to 0421 261 966 (standard text message rates apply).

Voting is by SMS only and there is a limit of 10 votes per person.

The winner will be revealed during the live finale on Saturday night.

Watch or stream Eurovision – Australia Decides on Saturday, February 26 at 8.30pm AEDT on SBS and SBS On Demand.

As Australians get ready to pick our entry, Eurovision backflips on Russia