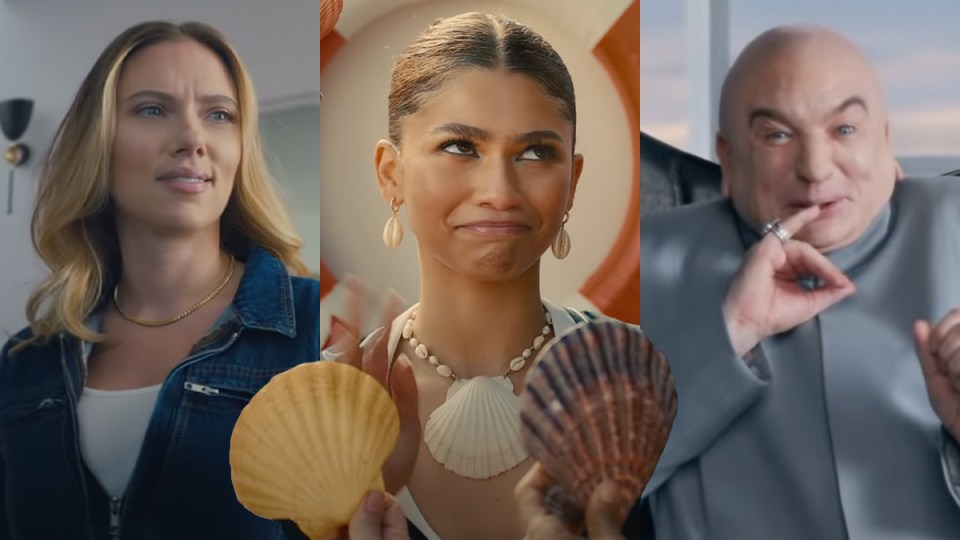 What do Scarlett Johannson, Zendaya and Dr Evil have in common? They all turned up for Super Bowl 2022. Photo: TND

It has to be said, nothing beats a good Super Bowl commercial.

Whether it be about chips, beer, electric cars, fast food delivery services, how to save the planet, or a tear jerker about an abandoned teddy bear who discovers virtual reality, one thing is for certain – reeling in an A-list celebrity for a cameo to sell it makes it all worth watching.

This year, a new record was set, and it wasn’t on the field.

Ad agencies who bought up every second of available airtime paid a whopping $US7 million ($9.8 million) for “a highly coveted 30-second spot on the NBC telecast”.

This was up from the average price tag of $US5.6 million ($7.8 million) CBS logged last year and works out to be about $60 million for every three minutes of commercials.

But it was new kid on the Super Bowl block, US actor Zendaya (Spider-Man, Euphoria), 25, who was the fresh face.

Zendaya plays … Sally … who is trying to expand her business and needs some online marketing help.

Zendaya said she was “incredibly excited” to be part of the campaign, and sent a subtle “lol” via Twitter when reminded she plays both 17-year-old drug addict Rue Bennett in the second season of Euphoria and fresh-faced sea shell beauty and entrepreneur Sally.

It chose the “world’s greatest villain” from the 1990s Dr Evil (a play on word EV-il) and his family including lover Frau Farbissina (Mindy Sterling), Scott Evil (Scott Green) and No.2 Rob Lowe to help out.

In the mini story, Dr Evil (Mike Myers) has taken over GM. But he has to save the world first from climate change, before he can take over the world.

He’s not happy about being Dr Good, and there’s the usual banter between father and son, and a lot of yelling from Frau, but they all pile into an electric vehicle and head off.

The two actresses have a lot in common … Ashton Kutcher.

They’re together in a hilarious 60-second AT&T commercial (for faster internet), where they bump into each other at a high school reunion and think they’re both up for an award.

As Kunis reminds Moore as they awkwardly stand on stage together: “We have a lot in common.”

The Jennifer Coolidge fan club continues long after her award-winning role in The White Lotus.

Sadly, there’s no Murray Bartlett, but she stars alongside Nicholas Braun, Trevor Noah and Gwyneth Paltrow who all struggle with the meaning of “eats” in the brand’s name.

Braun tries drinking detergent, Paltrow tries to eat one of her scented candles and the others? Well, they try to eat tin foil, nappies, kitty litter and sunscreen.

Coolidge is beside herself, spitting out cardboard: “We can’t eat any of this,” she cries, before realising you can order more than food now on Uber Eats.

She posted on Instagram on Monday she had “so much fun in this big game ad”.

“Now that you can get anything delivered with Uber Eats I ate a lot [of] things I’ve never tried before!”

Rudd and Rogen have starred in five feature films together (including Knocked Up in 2007), and here they spend 60 seconds reminiscing about the good times and bad, the road trips, kidnappings and haunted houses, supporting each other in every moment with their Lay’s potato chips in hand.

Before the commercial went to air on Monday, the pair sat down with Insider to talk through the more difficult part of filming a chip ad.

“We were told [saddle up] is the preferred way to eat these potato chips.

Gotta love CGI animals who can eat flamin’ hot Cheetos and Doritos, start dancing to Push It and hang upside down after a few.

The sloth is so cute, he’s the star of the show, and soon his jungle friends are eating a packet left on the ground by an amateur photographer.

After the Super Bowl was won by the LA Rams, Doritos was quick to post on Twitter: “Now that the game is over, it’s time for the real competition: What commercial is the best, of course?”

Scarlett and Colin … at home with Alexa

Appearing in their first project together for Amazon, Black Widow Scarlett Johansson and her SNL husband Colin Jost stretch out a decent comedy sketch over 180 seconds, and offer a real insight into their marriage.

Virtual assistant Alexa starts reading their minds, taking over their thoughts as they casually bicker and fight.

She can even randomly tell guests at a dinner party that Jost left the oysters in the car for five hours (yes, the guests all spit them back onto their dinner plates).

Matthew McConaughey is not making Interstellar 2

Hollywood royalty Matthew McConaughey has got us all thinking … there really should be a sequel to one of the best sci-fi movies ever made.

We all thought we were watching a trailer for Interstellar 2 and got excited.

Instead, the Dallas Buyer’s Club gentleman and philosopher clarified in Variety: “I wanted this misdirect at the beginning.”

“I wanted it to open and look very serious and in space because we’re about to pull the rug out from under you. Some people are going to think this is going to be the trailer for Interstellar 2.”

It’s not. He’s asking us to plant more trees, look after our planet before exploring the Metaverse and Mars.

“Yeah, it’s time to blaze our trail. ‘Cause the new frontier? It ain’t rocket science. It’s right here,” he said.

The moment we fell in love with a robotic dog

Awww, how can a little silver robot with big hound dog eyes be so adorable?

To the tune of Bonnie Tyler’s Total Eclipse Of The Heart, the little fella wants to be fully charged, to be alive, so he escapes from the toy store, runs after the car but …

His battery fails. Never fear. The electric Kia and his driver come to the rescue.

What is it with Clydesdales and Super Bowl commercials?

Directed by Nomadland’s Oscar-winning director Chloé Zhao, Budweiser returns to the Super Bowl with an iconic Clydesdale and a dog.

Entertainment Weekly makes one simple observation: “[The] commercial doesn’t contain much beer, but it does tell an uplifting story of getting back up after being pushed down.”