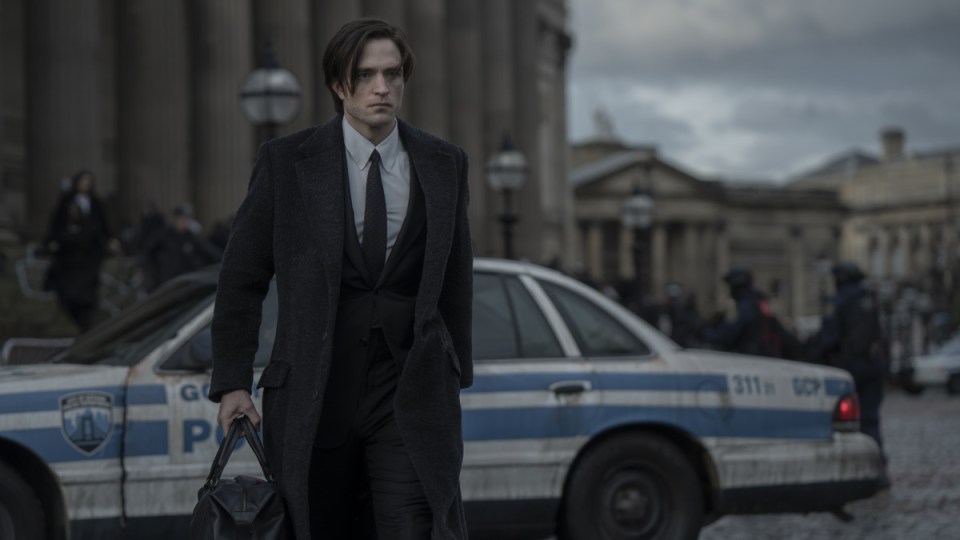 The Batman director Matt Reeves says Robert Pattinson is a ‘chameleon’ who never plays a character with his own voice. Photo: Warner Bros

As Robert Pattinson emerges from the darkness of shooting the latest big-budget Batman film, he reveals the movie is, in equal parts, intense and sad and is off-the-charts different to any other incarnation.

He says it’s a bit like a 1970s detective story and that this time Bruce Wayne is “kind of a weirdo … and a weirdo as Batman”.

In an extended profile for GQ magazine appropriately titled “Metamorphosis”, Pattinson says the first shot in a rough take he saw after shooting wrapped “is so jarring from any other Batman movie that it’s just kind of a totally different pace”.

“Because, normally, in all the other movies, Bruce goes away, trains, and returns to Gotham believing in himself, thinking, I’m going to change things here.

“But in this, it’s sort of implied that he’s had a bit of a breakdown,” he said, going from highly stylised brunette to bloody and battered blond in the magazine’s photo shoot.

In the most recent Warner Bros trailer released this week, there’s a  three-minute funeral scene showing a completely dishevelled, sad version of Wayne in an ordinary grey suit, ghostly, with limp hair walking into a packed church.

With the sounds of angelic choirboys in the background, he looks to the altar and sees a young boy staring back at him.

It must remind him of losing his parents in the original 1989 Batman film starring Michael Keaton, where they were shot and robbed in a back alley after going to the theatre.

Suddenly, the crowd screams and runs for cover as a runaway car crashes through, and in an instant we know he’s the good guy as he grabs the boy, saving his life.

A man with a bomb strapped around his throat gets out of the car (for an instant you think it’s Bane from The Dark Knight Rises), and stuck to his chest are the words: “To the Batman”.

“It’s two years into it, and the crime has gotten worse since Bruce started being Batman. The people of Gotham think that he’s just another symptom of how sh-t everything is,” Pattinson said.

“It’s kind of about him trying to find some element of hope, in himself, and not just the city. Normally, Bruce never questions his own ability; he questions the city’s ability to change.”

In his lengthy interview with GQ, eating in cafes and walking the streets of London talking all things movie making and the trajectory to fame, Pattinson says this role was the “hardest thing I’ve ever done”.

Shooting began at the end of 2019, he tested positive to COVID-19 in September 2020, and with multiple delays and lockdowns, the shoot spread over 18 months.

The official synopsis reads: “Two years of stalking the streets as the Batman, striking fear into the hearts of criminals, has led Bruce Wayne deep into the shadows of Gotham City.

“With only a few trusted allies – Alfred Pennyworth (Andy Serkis), Lieutenant James Gordon (Jeffrey Wright) – amongst the city’s corrupt network of officials and high-profile figures, the lone vigilante has established himself as the sole embodiment of vengeance amongst his fellow citizens.

“When a killer targets Gotham’s elite with a series of sadistic machinations, a trail of cryptic clues sends the World’s Greatest Detective on an investigation into the underworld.”

It only dawned on Pattinson that the movie is “actually” a detective story when he filmed the first shot.

He felt like an “idiot”, having never heard of Batman described as the “world’s greatest detective” before.

“But it really plays,” he said.

“Normally, when you see Batman he arrives and beats people up.

“But he’s having conversations, and there are emotional scenes between them, which I don’t think have been in any of the other movies.”

The bat suit, the cowl, and looking green

Pattinson says he felt “very much alone” throughout filming, with the crew building him a little tent off the side to one of the main sets where he could chill.

“The nature of the shoot was so kind of insular, always shooting at night, just really dark all the time, and I felt very much alone,” he said.

Pattinson wasn’t allowed out of the studio with the suit on, so he barely knew what was going on in the outside world.

“I’d be in the tent just making ambient electronic music in the suit, looking over the cowl. There’s something about the construction of the cowl that makes it very difficult to read books, so you have to kind of almost lean forward to see out of the cowl,” he shares.

Pattinson spent weeks in the darkness of the cowl.

After filming wrapped in April, and after spending solitary hours in the dark, he tells GQ he felt “really, really, really dead afterward”.

“I just looked at a photo of myself from April and I looked green.”

Colin Farrell (Fantastic Beasts and Where to Find Them, The North Water) plays crime lord Oswald Cobblepot, aka Penguin.

He is Bruce Wayne’s polar opposite, having been born into privilege but discarded and denied his birthright.

The character was made famous by Danny DeVito in the 1992 Batman Returns version.

Farrell recently told Total Film that the make-up artists are the ones who should take credit for his transformation.

“When I saw what Mike [Marino, make-up artist] did, the whole character made sense to me. I swear to God, I saw what he did, and I just went ‘OK, OK’. And I got really excited about it,” he said.

Kravitz told Total Film on February 7: “To see a person like Selina really get in touch with her power and become Catwoman? That’s a journey that I’m really interested in exploring”.

As for Carmine Falcone, who else could really play him but the fast-talking jittery man-on-a-mission John Turturro (the Transformers films, The Plot Against America).

The Batman will be distributed worldwide by Warner Bros. Pictures and opens internationally from March 2.