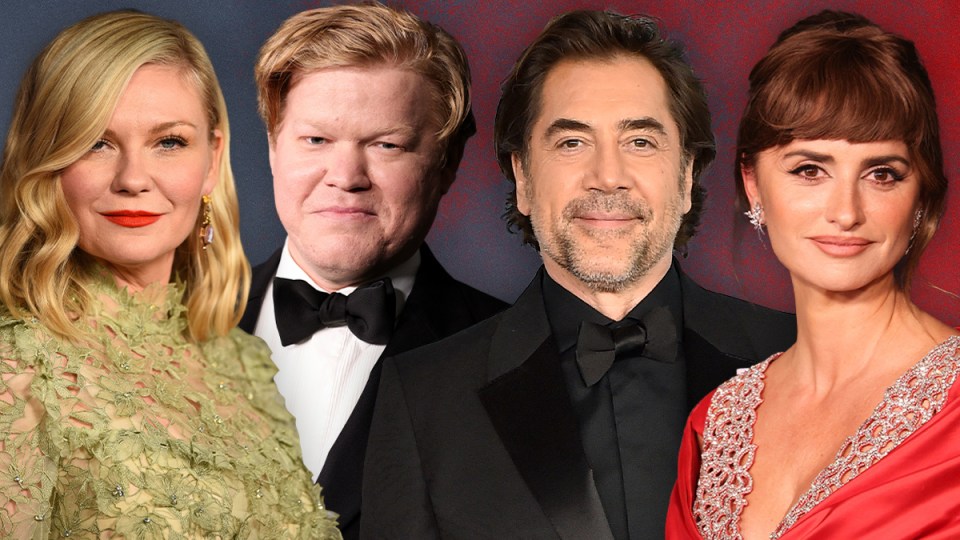 Kirsten Dunst and her fiance since 2017 Jesse Plemons, and Javier Bardem and Penélope Cruz, married since 2010.

Every year during awards season, the multibillion-dollar global film industry is on tenterhooks as the stars and movie houses brace to find out who has been recognised for their hard work and investment.

This year is no different, except for several magnificent history-making Oscar firsts.

In its 94th year, it is going to be “an especially unique night for two couples”, wrote the Academy of Motion Picture Arts and Sciences after announcing their nominations on February 8.

Penélope Cruz (Parallel Mothers) and Javier Bardem (Being the Ricardos) and Kirsten Dunst and Jesse Plemons (both in The Power of the Dog) marked a record milestone for real-life couples at the Oscars.

Both duos were nominated in their respective acting races.

The Power Of The Dog director Jane Campion makes history as the first woman to receive two best director nominations in her career.

And her director of photography, Ari Wegner, becomes the second woman ever nominated for best cinematography.

But that’s not all.

As the producer of the film, which earned a total of seven nominations, Spielberg has now produced 11 films nominated for best picture.

Emile Sherman, the Sydney film producer of The Power of the Dog and co-founder of See-Saw Films, told The New Daily on Wednesday it’s “a very rare number of women to be nominated for best director, best film”.

He said the mood in their movie house was “all excitement”.

The Netflix production led nominations with 12 nods, including Best Picture, Best Director and recognition for all of its top actors: Benedict Cumberbatch, Dunst, Plemons and Kodi Smit-McPhee.

The film lands in esteemed company, with only a handful of movies – including two from See-Saw Films – also receiving 12 nominations, including Ben-Hur, My Fair Lady, and Schindler’s List.

“Having been through it a couple of times before with The King’s Speech and Lion, you realise just how special it is, how rare it is and what a huge number of elements have to come together to get to this moment,” Sherman said.

“The film has to be a really great film. You have to connect with audiences, critics, academy voters, you have to feel urgent in a way, a film that people need to be talking about and seeing now.”

Sherman said the film, which is independent and “can punch internationally”, makes for a rare combination of firsts.

It was also made entirely in New Zealand and post-produced in Australia.

The icing on the cake is the nomination of young Australian actor Smit-McPhee, 25, who plays Peter in the film.

He was also nominated in the same category as Plemons.

“While we cast the net wide and did a lot of tests, there were very few actors with Kodi’s presence that we looked at. What he brought was something that transcended the script,” Sherman said.

He added that so much of the film hinges on Smit-McPhee’s performance.

“And like so many overnight successes, it’s based on years and years of hard work. He does know the craft of acting and he knew how to craft that character.”

Over the past nine decades, there have only been a handful of married couples who were nominated for Oscars in the same year.

Most famous would have to be Vivien Leigh and Laurence Olivier, both nominated months before their 1940 wedding.

Leigh won Best Actress (the first British woman to do so) for her role as Scarlett O’Hara in Gone with the Wind, while Olivier was nominated for playing Heathcliff in Wuthering Heights.

This year we have not one, but two couples, making history in an Oscars first.

“To be honoured by the Academy is a truly humbling experience,” Dunst said in a statement.

“For both Jesse and I to get our first nominations together is beyond our wildest dreams.”

Other famous couples include Richard Burton and Elizabeth Taylor who were nominated in 1967 for their starring roles in Who’s Afraid of Virginia Woolf?

Then there’s Paul Newman and Joanne Woodward in 1969 for Rachel, Rachel, John Cassavetes and Gena Rowlands in 1975 for A Woman Under The Influence and Joel Coen and Frances McDormand in 1997 for Fargo.

Before Michael Fassbender and Alicia Vikander married in 2017, the pair were nominated for Oscars in 2016.

Vikander won the Academy Award for best supporting actress for her role in The Danish Girl and Fassbender was nominated for best actor for his role in Steve Jobs, but didn’t take home the Oscar.

A feast of firsts for the 94th Oscars nominations

British actor and director Sir Kenneth Branagh has broken the Oscar record for most nominations in the most number of categories (seven) for his inspiring, semi-autobiographical film Belfast.

Newsweek reports the previous record of six nominations in six different categories was held by George Clooney and Walt Disney.

After months on the publicity trail for House of Gucci, Lady Gaga was shockingly omitted after intense speculation she was a front runner, with Stewart, Nicole Kidman and Olivia Colman recently ignored by BAFTA.

“[With] Gaga, distaste for the film seems to have overpowered her. And remember, this extremely competitive best actress category was destined to break some hearts,” wrote Vanity Fair.

And then there’s Grammy-winning singer-songwriter Beyoncé, who lands her first Oscar nomination for her single Be Alive in biopic King Richard.

It stars Will Smith as the father of tennis champions Serena and Venus Williams.

Last but not least, Troy Kotsur is the first deaf actor to land a Best Actor nod in a supporting role in Coda.

Oscar nominations 2022: A year of firsts for celebrity couples, directors and an Aussie star