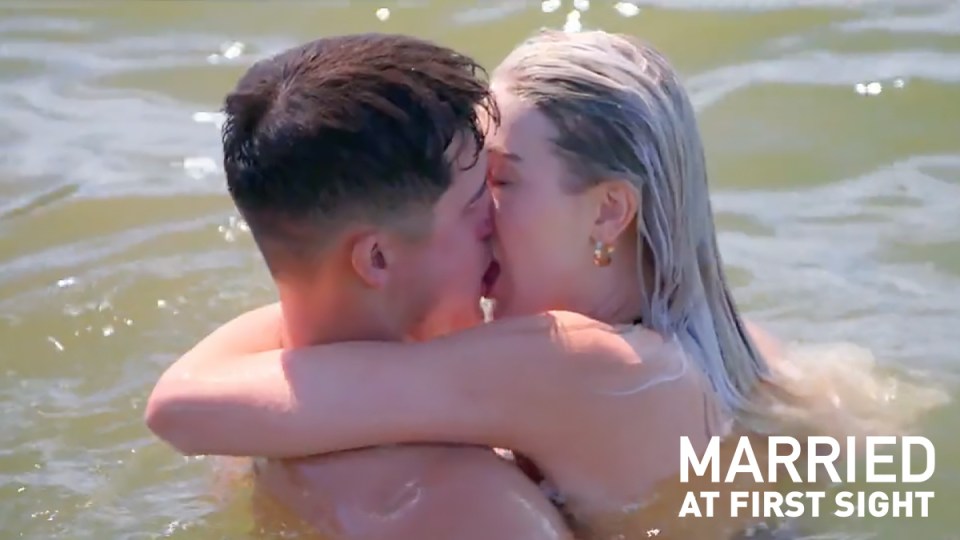 Nine seasons later and one of the nation's biggest ratings winners is back, some saying raunchier than ever. Photo: Nine

Eight years ago when reality TV show Married At First Sight first hit our screens, it presented as a semi-legitimate dating show with a documentary feel, complete with the mix of the usual shenanigans of love, break-ups and make-ups of new relationships.

This year, some have observed, it’s going next level.

On the morning of the premiere on the Nine Network on Monday night, stablemate colleague on The Today Show Ally Langdon expressed her concerns to relationship expert John Aiken regarding how raunchy it looked compared to previous seasons.

“I’m not going to deny this cast of participants, they’re slightly younger and very sexy … and they really have their own personalities that when you put it in the mix, it explodes,” she said.

“None of them are wallflowers. They are all very outspoken.”

Today co-host Karl Stefanovic observed that there were definitely sparks flying between the eight couples.

Several two-minute promotional videos, released over the past several weeks on the network and on social media, tease with snippets of couples making out in spas or at the beach, cross-dressing, fetishising, or semi-naked in the shower or bedroom.

“There are a lot of things you’re going to see this year. There’s great sexual chemistry between one couple, and frankly they almost always want to try and get their kit off throughout the whole season,” Aiken replies.

“We’ve got people who really flirt with temptation in this experiment,”

“The first couple of seasons were innocent, in part because the production company and Nine didn’t know how far they could push it and they didn’t know the kinds of people who would want to appear on a show like it.

“Once it landed, though, it opened an opportunity for those that might be willing to put themselves through the process for ‘greater’ fame.

“With the exit of original expert Trisha Stratford [New-Zealand born neuro-psychotherapist] it opened the way for the show to be switched up a little, and with the brand now cemented – and stuff happening on the screen that was overtly sexual anyway – the inclusion of a ‘sexologist’ makes sense.

“Are they pushing it too far? Possibly, though how else do you maintain ratings dominance after eight seasons and multiple cheating scandals?”

“Without that, it would just be Big Brother up late!

“The show still has to meet standards. It is interesting they have this intimate physical aspect to it … MAFS has always had drama, but having the expert does allow you to push boundaries in the name of behavioural science.

“Of course, it will get raunchier because they have to keep it fresh.

“The emphasis on physical intimacy and sex now in the show, they might be able to push that envelope a bit because they have legitimised it with the clinical expert.”

And Dr March hastens to remind us all that although these couples don’t even know each other and are getting intimate, they are, well, married and that’s how you can explain it to a younger audience.

“What is amazingly clever about this show for people who might be a bit conservative, is that these people are technically married, so they can get away with it. It’s not as if they’re all single, they can do all of this under the cloak of marriage,” she says.

Was MAFS ever family viewing anyway?

“Even when it started I don’t think MAFS was family viewing,” he said.

He said the change in classification for content within the show’s lifetime [from PG to M] “opened the way for more adult viewing from 7.30pm, which MAFS is able to capitalise on”.

Even the show itself says it’s “turning up the love meter” this year.

“That said, there are few prime-time programs that are family viewing that families will actually sit and watch anyway,” Mr Molk said.

“When parents can watch show A and teens or younger can watch shows B and/or C on their devices elsewhere, true family programming is becoming harder to find than a unicorn.”

A quick look back at season one, which aired in May 2015 over six episodes, sees three out of the four couples deciding to stay together after the show ended.

While they all eventually separated, a hasty look-through of episodes has a more documentary feel with longer narration, less dramatic music, and couples more willing to “give it a go”.

There wasn’t the affairs (2018), the wife-swapping, massive arguments or dinner party wine-pouring meltdowns (2019) and downright-mean brides who thought their brand new husbands were complete trash (2020).

“[It] appears to be, based on promotional teasers, nothing more than a TV series which promotes sex, false love, bitter personal relationships, and orchestrated marital conflict,” it said.

“Where has the art of romance and courtship gone? How can healthy lasting marriage be promoted if couples won’t get to meet their future husband or wife until their wedding day – a recipe for heartache and divorce.”

Regulatory body finds no code breach after complaints in 2021

In June last year, the Australian Communications and Media Authority (ACMA) commenced an investigation under the Broadcasting Services Act 1992 (the BSA) after complaints about three episodes – two with PG classifications – earlier in the year.

In a detailed report released in October, ACMA found found no breach and that the content could be accommodated within the respective classifications.

“In the case of the PG-classified episodes, the ACMA found that themes within the programs, including social conflict, were carefully handled, and included extensive critiquing and positive aspects of the relationships. This resulted in the overall impact of the content not exceeding mild impact.

“In the case of the M-classified episode, which is intended for mature audiences, the ACMA found that an intense adult theme explored in the program was handled with care, extensively critiqued and adequately contextualised,” the report read.

Mr Molk predicts some viewers will again be offended by the content in the 2022 season, and complain about a breach of standards.

“The production company [and] Nine tread this line very carefully – some complaints that they can beat makes for good PR.  Lots of complaints and a ruling against them can be negative,” he said.

“They will want column inches every day about the shenanigans of the participants (and from what I’ve seen already this season, they’ll get them).

“Everyone has an opinion on relationship standards, and that’s what this show brings to the social and water-cooler table.”