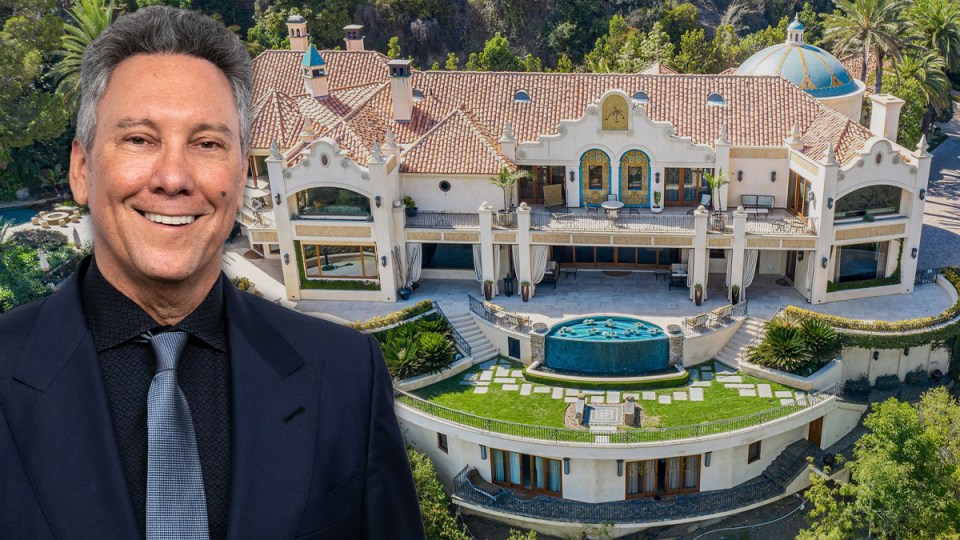 Ok, we're snoops! Take a look at US screenwriter, producer and director Jeff Franklin's house in the hills. Photo: TND

It comes as no surprise that the top three things on our bucket list of goals in 2022 are these: Travel, saving for a home, and buying that home.

And what if that home for sale is owned by a celebrity?

Come on. We all fantasise about living in a completely over-the-top Hollywood Hills-style mansion, swimming in the same pool or sleeping in the same bedroom as our favourite celebrity.

Why, even Drac (Hotel Transylvania 4:Transformania) has his totally secluded 400-room, 200-bathroom mansion up for sale.

More on that later.

A quick search of what’s really listed – especially in Los Angeles and New York – shows a handful of palatial properties [a few with undisclosed vendors’ names attached] up for sale, including one Beverly Hills estate with a price tag of $US85 million ($118m).

A recent Australian study from Pureprofile commissioned by Amazon Prime Video for Hotel Transylvania revealed 56 per cent of Aussies are obsessed with snooping around and looking inside the homes of the rich and famous.

An incredible 82 per cent will look at homes or inspect them online with absolutely no intention of buying or lodging an enquiry.

It’s all about being “nosey”, and imagining themselves living in a celebrity’s home, even if it is totally unattainable.

Luxe Listing Sydney star and seasoned Double Bay real-estate agent D’Leanne Lewis, who has managed some of the most opulent and over the top listings in the country, says typically the palatial properties are “reserved for private viewings on enquiry”.

“More than half of Australians … like to be nosey and look inside the homes of the rich and famous,” she says. “It’s only natural to want to see how the other half live – we are all human.

“People are intrigued for a reason, they want to have a better understanding of the person selling, what their property looks like and why they are selling,” she tells The New Daily.

Ms Lewis says some people see a for-sale board from the street and walk in, “but you can still check out properties of celebrities online”.

She says she’s recently sold some “jaw-dropping multimillion-dollar homes and worked with some “interesting clientele”.

“I recently sold two homes in Vaucluse for $35 million and $23 million in only two months, while I set a record for the highest apartment ever sold in Rose Bay at $13.5 million”.

The research – conducted on a sample size of 1000 people over a week in December – goes on to reveal 44 per cent would go to an open house of someone who is rich and famous “just to look around”, and 33 per cent admit they are nosey sorts who love to look inside other people’s homes.

More than a quarter (26 per cent) of Australians are obsessed with the thought of buying a quirky property, and 70 per cent say they love viewing or researching properties.

“Normally those who are famous have the most quirky properties because they’re not afraid to really inject their personality, which draws buyers in,” she adds.

Within hours of high-profile US ‘A-list living’ real estate agency Douglas Elliman advertising the $US18 million New York penthouses of singer-songwriter John Legend and TV host and model Chrissy Teigan, hundreds of views were logged, from dreamers with heart-shaped eyes to some tagging friends and family saying “let’s go halves”.

With six bedrooms and six bathrooms over two penthouses inside a 19th-century landmark property called Brewster Carriage House in Nolita, NY, who wouldn’t want to live there?

Over on the west coast, let’s take a walk through Full House creator Jeff Franklin’s $US85 million ($118m) Beverly Hills estate, which he developed after purchasing the property for $6 million 20 years ago.

The property is located on Cielo Drive, once contained the house where actress Sharon Tate and others were murdered by the Manson Family in 1969 (the house was demolished by a previous owner in the 1990s).

Listed on January 19, the Wall Street Journal reported his Andalusian-style home is “chock-full of outlandish amenities like a shark tank and waterslide”, has nine bedrooms and 18 bathrooms.

“The house was designed by architect Richard Landry, who is known for building mega-mansions for celebrities and business tycoons,” WSJ wrote.

“Its amenities include a movie theatre, spa, gym, hair salon, billiards room and bar. Outside, the property has a pool with three waterfalls, two hot tubs, a 35-foot waterslide, a swim-up bar, a private grotto, a koi pond and a lazy river.”

Mr Franklin called the connection to the Manson murders “irrelevant” and “ancient history”, reported the WSJ. “It’s had absolutely no impact on my life whatsoever.”

“A recent run of controversy and failed projects has culminated in the listing this week of the 31-year-old’s mansion in the gated community of Hidden Hills for US$6.195 million ($8.58 million),” it wrote.

With a kitchen to die for, and a separate two-storey guest cottage, the Pureprofile research showed 93 per cent of Aussies “think it is important to be patient and wait to find your dream property before purchasing”.

The only downside is it requires a move to the “posh enclave” of Kim Kardashian, Madonna and Drake.

Closer to home, with the research showing we want large rooms (63 per cent), a unique design (25 per cent) and a touch of quirk (10 per cent), look no further than Neighbours actor Ryan Moloney, who plays Jarrod ‘Toadfish’ Rebecchi, who has listed his luxurious Mornington Peninsula property at Merricks with a price tag of $7.5m-$8m.

Realestate.com.au reports the actor and wife Alison are selling the four-bedroom property, complete with a pool, gym, half basketball court, barn, riding arena and stables.

Set on 4.3ha, you can ride to the beach from this “virtually off-grid” home, take over their bee-keeping honey business and, when you look through the photo slides, fantasise about the size of their walk-in robe.

Sadly, you’ve missed out on buying That ’70s Show celebrity couple Ashton Kutcher and Mila Kunis’ Beverly Hills mansion, but it was on the market for two years before finally selling for $US10.35 million ($14.28 million).

You can still take a look through the guard-gated home in Hidden Valley if you want some styling options, and Kunis’ Instagram often has the home in her social media posts.

And if you’re after a sustainable farmhouse look, and you’ve got a bigger budget, take a look at where they’re now living.

And (spoiler alert: storyline in the movie released on January 14),  just for a bit of fun to get into the spirit of celebrities selling their homes, Ms Lewis has listed Drac’s Transylvania home that he’s owned for more than 500 years.

If the research is anything to go by, Drac’s home might be on the market for a while, as 17 per cent of Aussie real estate hunters would consider if someone had died there, if it smells (15 per cent) or if it is haunted (10 per cent) before committing to buying.

“Throughout my career as a Sydney real estate agent and my time on Prime Video’s Luxe Listings Sydney, I’ve never seen a property like this come onto the market.

“In fact – it is my privilege to manage this once-in-a-quincentenary listing like this medieval home.

“Time and time again I have been asked if a property is spacious, private and unique and I can guarantee any buyer that this palatial hotel has all this plus more,” she joked.

Celebrity real estate: Why we’re so ‘nosey’ when the rich and famous sell their homes