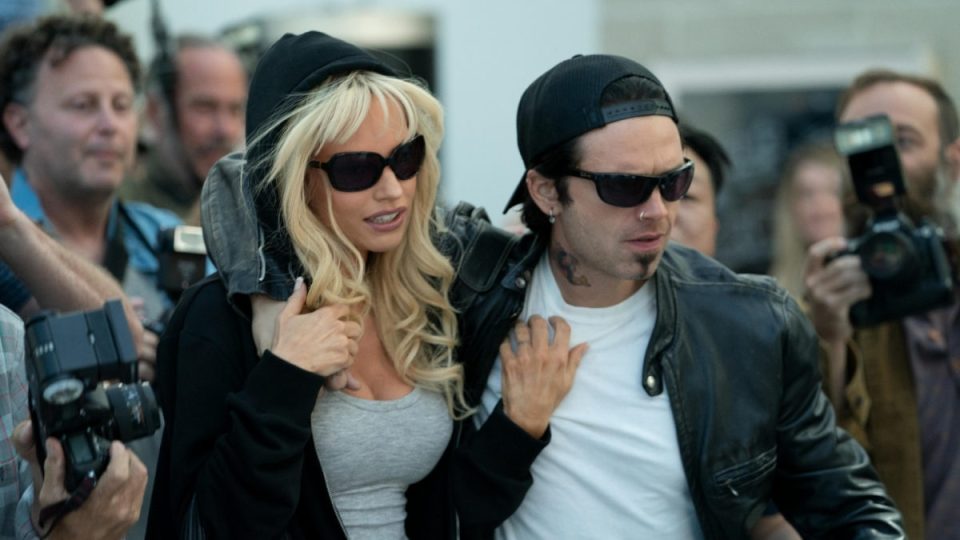 From the moment Lily James unveiled her jaw-dropping transformation into Pamela Anderson last May, Hulu’s Pam & Tommy instantly became one of the most highly-anticipated shows of 2022.

But for Anderson, perhaps the worst chapter of her life had just been pushed back into the headlines.

James (Cinderella) was cast as the Baywatch star opposite Sebastian Stan (Falcon and the Winter Soldier) as Mötley Crüe drummer Tommy Lee.

Set during the dawn of the internet, the eight-part series traces the couple’s whirlwind romance – a liaison ultimately defined by their leaked sex tape.

Anderson’s friends have come out swinging against the show and cast since its inception.

Neither Anderson nor Lee is involved in the series.

The biggest sex scandal of the ’90s

Anderson and Lee, who have two children together, were married from 1995 to 1998.

They practically invented the term ‘whirlwind romance’ when they eloped after knowing each other for just four days.

But misery ensued when scorned electrician Randy Gauthier, who was fired from a job at the couple’s Malibu mansion, stole the sex tape they made on their honeymoon and wrung every last buck out of its exposure.

It was eventually obtained by distributor Internet Entertainment Group (IEG), which started selling downloadable copies of the tape online.

The video spread as far as the internet was capable of back then. People really wanted to watch it.

Filmmaker Craig Gillespie (I, Tonya, Cruella) directed the first three episodes of the series. He told Collider that the show is as much about our complicity as it is about the breach of privacy.

“It does the same interesting thing, where we go in being complicit because we wanna see it and relive this. And then, halfway through it, we realise that we’re the problem, as an audience,” Gillespie said.

‘It destroyed my friend Pamela’

Anderson has yet to comment on the series, but her friend, Hole rocker Courtney Love, has had plenty to say about it.

Love said that when the sex tape went viral, she banned everyone in her studio from discussing it.

“It destroyed my friend Pamela’s life. Utterly,” she wrote.

Love also claimed that Hulu asked to use her likeness in the series.

“Last week I was asked to approve using a Rolling Stone cover of mine  shot by Mark Seliger in this piece of s—,” she wrote.

“I said ‘f— no’. Shocked. Gentlemen don’t approve this sort of thing.”

“My heart goes out to Pammy … further causing her complex trauma. And shame on Lily James whoever the f— she is. #vile.”

Lee, however, gave the series his blessing.

At the 2021 MTV Video Music Awards in September, Lee told ET that he is excited about the biopic.

“I know Sebastian, he’s playing me. From what he’s told me, really beautiful story,” he said.

But while Lee said the story is “cool”, what actually happened wasn’t and “people need to know” the truth.

Critics have their say

Reviewers were unsurprisingly wowed by James’ remaking into Anderson. Variety called her performance and physical transformation an “outright triumph”.

But where critics differed was over Anderson’s treatment in the series and, more widely, the use and abuse of women in entertainment.

At the time, Anderson was reduced to a one-dimensional blonde bombshell who was widely mocked over the sex tape. Lee’s reputation as a bad boy rocker remained intact.

James previously told Variety that the show intended to give Anderson the “justice she deserves”.

IndieWire agreed, writing that the way Anderson was portrayed allowed her to “be the fully realised person she was never allowed to be”.

But the BBC raised the question of whether that was possible without Anderson’s involvement in the show, describing the series as “exploitative” without her storytelling and approval, “as if once again the entertainment industry is profiting off her shaming”.

Still, the new series is bound to be watched by many, and perhaps this will become a conversation-starter among viewers.