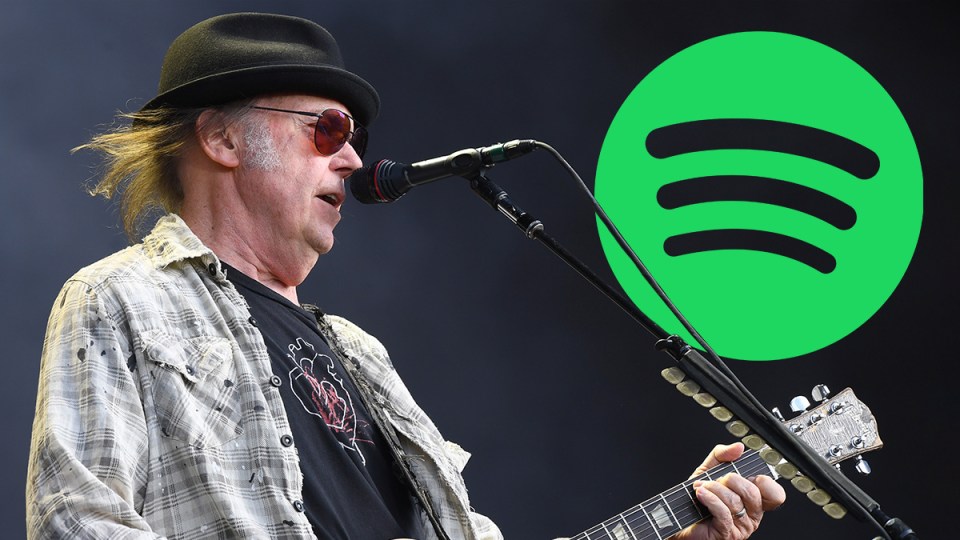 It is not the first time that legendary Canadian rock and roller Neil Young has taken a public stand about his music being playing on the world’s largest streaming platform Spotify.

Young had a stoush with Spotify in 2015 for allegedly delivering poor sound quality, accusing it of peddling “the lowest quality in music reproduction”.

Fast forward six years, and the ageing 75-year-old Harvest Moon rocker is making headlines again, joining a chorus of concerns from the global medical community about a highly controversial episode on The Joe Rogan Experience (JRE).

In episode 1757 of the JRE on December 31, guest Dr Robert Malone (who says he alone invented mRNA vaccines) promoted “an unfounded theory that societal leaders have hypnotised the public,” according to 270 doctors and healthcare professionals who wrote an open letter to Spotify earlier this year.

Malone said the FDA-approved vaccines were “experimental”, “explicitly illegal”, and that the side effects were not being revealed to the public.

“The episode has been criticised for promoting baseless conspiracy theories and the JRE has a concerning history of broadcasting misinformation, particularly regarding the COVID-19 pandemic,” the letter read.

“By allowing the propagation of false and societally harmful assertions, Spotify is enabling its hosted media to damage public trust in scientific research and sow doubt in the credibility of data-driven guidance offered by medical professionals.”

Young, using his musical influence (questionable to many on social media), weighed in, and refused to share the same platform with the American podcaster.

In a since-deleted letter posted to his website on Tuesday, Young told Warner Bros and his management LookoutManagement: “Please immediately inform Spotify that I am actively canceling all my music availability on Spotify as soon as possible.

“I am doing this because Spotify is spreading false information about vaccines – potentially causing death to those who believe the disinformation being spread by them.”

“Please act on this immediately today and keep me informed of the time schedule,” the letter continued.

“I want you to let Spotify know immediately today that I want all of my music off their platform. They can have Rogan or Young. Not both.”

The concerns raised by the medical community in the open letter focus on their request for Spotify to introduce a misinformation policy.

Medical professionals want Spotify to stop podcasters, musicians and entertainers from spreading deadly misinformation about vaccines during a global pandemic, which has already claimed the lives of more than 5.6 million people.

With Young taking such drastic action, and in the process losing 60 per cent of his music streamed to a global audience, it continues to remind everyone of the dangers that lay with broadcasting false claims about vaccines.

“Spotify has recently become a very damaging force via its public misinformation and lies about COVID,” Young wrote.

“I first learned of this problem by reading that 200-plus doctors had joined forces, taking on the dangerous life-threatening COVID falsehoods found in Spotify programming.

“Most of the listeners hearing the factual, misleading and false COVID information on Spotify are 24 years old, impressionable and easy to swing to the wrong side of the truth.

“These young people believe Spotify would never present grossly unfactual [sic] information. They unfortunately are wrong. I knew I had to try to point that out.”

He did. And so did the scientific community: “Throughout the COVID-19 pandemic, Joe Rogan has repeatedly spread misleading and false claims on his podcast, provoking distrust in science and medicine. He has discouraged vaccination in young people and children,” the healthcare professionals wrote.

“We are calling on Spotify to take action against the mass-misinformation events which continue to occur on its platform. With an estimated 11 million listeners per episode, JRE is the world’s largest podcast and has tremendous influence.

Spotify began removing Young’s music at his request and in a statement on Thursday (AEDT), Spotify said that it regretted his decision, “but hope to welcome him back soon.”

They dropped Young. They kept Rogan on the books.

A Spotify spokesperson told Variety: “We want all the world’s music and audio content to be available to Spotify users”.

“With that comes great responsibility in balancing both safety for listeners and freedom for creators. We have detailed content policies in place and we’ve removed over 20,000 podcast episodes related to COVID since the start of the pandemic.

“We regret Neil’s decision to remove his music from Spotify, but hope to welcome him back soon.”

Forbes reported the hashtag #WhoisNeilYoung was trending, “with many users mockingly pondering who he is, while others expressed faux shock that he was still alive (and possibly rocking in the free world)”.

Even Donald Trump Junior couldn’t help himself and posted a comment.

Meanwhile, there were plenty of supporters pushing the hashtag #deletespotify, with high profile names posting messages including US activist and author Amy Siskind.

“If I have to pick between these two musicians on opposite sides of the vaccination question, I’m clearly picking the Canadian. Glad to see Neil Young still has a ‘Heart of Gold’ and representing Canada Flag of Canada well. Get your vaccination,” wrote one fan.

Another said: “I stand with Neil Young, with civility, with decency, with freedom of speech. I don’t stand with anti-vaxxers spreading lies. I’ve been a subscriber for years but I refuse to help pay Joe Rogan’s salary.

“Love the clowns who are laughing as if Neil Young ever thought Spotify would drop Joe Rogen [sic]. The guy took a stand, put his money where his mouth is. Forced a sh-tty company to make a true colours-revealing decision.

“This is just one of the many reasons Neil is an all-timer.”