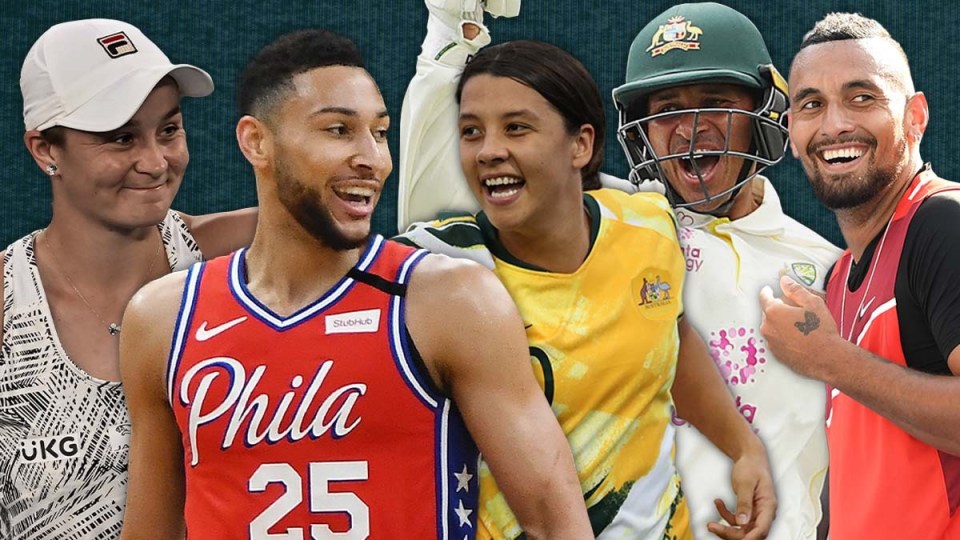 These days, it’s not enough to just be a talented sports star, smashing aces on centre court or kicking winning goals in search of the ultimate prize.

Our best athletes are also here to entertain us, to bring us into their world of what it’s like to be an elite competitor in front of the camera,  and enable us – thanks to social media – to see their private lives.

Business Insider Australia says the “human drama is one of the most compelling aspects of sports”.

“Pure athletic achievement is fun to watch, but the story lines make it interesting, and provide the bedrock for much sports coverage,” BI wrote.

Clinical psychologist Tamara Cavenett and president of the Australian Psychological Society tells The New Daily we all like to hear about the “human aspect” of how athletes got to where they are.

“When it comes to sport, you’ll often hear [media] commentary on more than what they’re doing on the court. All the background that goes into being an athlete … and what might go on to make all of that possible,” she says.

“We have a fascination in how one can achieve at that level, what goes on and how they might actually be able to do that because it’s such a phenomenal story and takes such a commitment … there are a lot of pressures.”

Over the past week, we’ve seen Nick Kyrgios’s so-called Greatest Showman antics on court, working up a desperate sports-deprived Melbourne Park audience into a frenzy, losing his second-round singles match late last week but teaming up with old mate Thanasi Kokkinakis for a sensational doubles win on Sunday afternoon.

He’s had asthma, COVID, no real match practice, and plenty of Djokovic and vaccination opinion on his social media.

Regularly sharing his private life with new girlfriend Costeen Hatzi to his 1.7 million Instagram followers helped complete the package, and there you have it.

An engaged and gracious World No.1 Ash Barty sat down with Alex Cullen on Nine’s Today Show on January 21 to talk about tennis, but the interview didn’t just concentrate on discussing her dedication and preparation to win another grand slam.

She was also asked about her private life, her new Uber Eats seance commercial, and her November engagement to boyfriend Gary Kissick and how he proposed.

“We were just at home, just with the dogs.

“And that was it. It was perfect for us. I’m incredibly excited for our next chapter and it’s going to be awesome,” she says, revealing her mother was with her during the Australian Open.

“They have almost allowed us a greater insight that they are real people,” Ms Cavenett says.

“Before, you’ve always seen them as extreme athletes and not necessarily that connected to you, but it feels like they are more human.

“They are doing the same things in their lives, and juggling and tackling very similar issues and concerns that we tackle, and then having to perform at that level on court.

“It also makes great conversation! People who love sport, you often see men sit around in a group and analyse who’s done what on a field, in what way and by whom, in an almost gossip-like style as they talk about what would produce that level of athleticism.”

Barty, a self-confessed sports nut who now follows Kissick’s UK soccer club Liverpool, told Nine she FaceTimed her nieces every day while in Europe last year and how her parents mean everything to her.

“They raised me to be the woman I am today. It’s nice to have mum down here. It’s such a massive part of their life as well.”

Partnering with Uber Eats is icing on the cake for Barty in a commercial showing her participating in a seance which she says was “weird, but cool”.

Meanwhile, even though the Ashes series is now long gone, who can forget 35-year-old Australian cricketer Usman Khawaja’s twin centuries in Sydney after his late call-up, which cemented his place in the team which prevailed 4-0 over England.

We watched him bat. We revisited his back-story.

And what better way to talk up his success than having his wife Rachel (who converted to Islam in 2017 before getting married) and daughter Aisha out on the SCG after the match.

“Last night he surprised me with how calm he was. He had a good night’s sleep and he woke up this morning and seemed pretty chilled,” Rachel told Fox Sports on January 6.

“I think we both just thought it was unexpected. He has been out of the team for two years.

Ms Cavenett says what is fascinating for us as viewers at home is when our sports heroes take such large amounts of time off and still come back and play, and play well.

“I think that’s a phenomenal effort on their part,” she says.

Former Bleacher Report CEO Dave Finocchio told BI “there has been a shift more generally for athletes to open up their lives to fans, pushing the intimacy boundaries further and further”.

“I think that there’s certain sports where it’s definitely happening faster than others.

“I think the NBA [National Basketball Association in the US], for example, is a league where a lot of the athletes view themselves as entertainers or half-athletes, half-entertainers.”

“The reason is simple: if you are a celebrity, you get the big bucks.”

Ms Cavenett says sports psychologists are the experts when it comes to helping athletes “in all things playing sport at elite level, how to tackle things in your personal life and have them not play out on the court”.

“When you’ve got an image to create and protect, I think it’s quite a juggle psychologically to be doing that while playing at that level.

“The element of athletes that we love – compared to actors where we can doubt what they’re presenting in a reality TV show – is we feel that with sport, it is actually who they are.

“You can’t hide whether you won or lost a game and how you feel about it and react.”

Reality TV is the winner here.

‘Half-athlete, half-entertainer’: Why the best reality TV going around is watching live sport