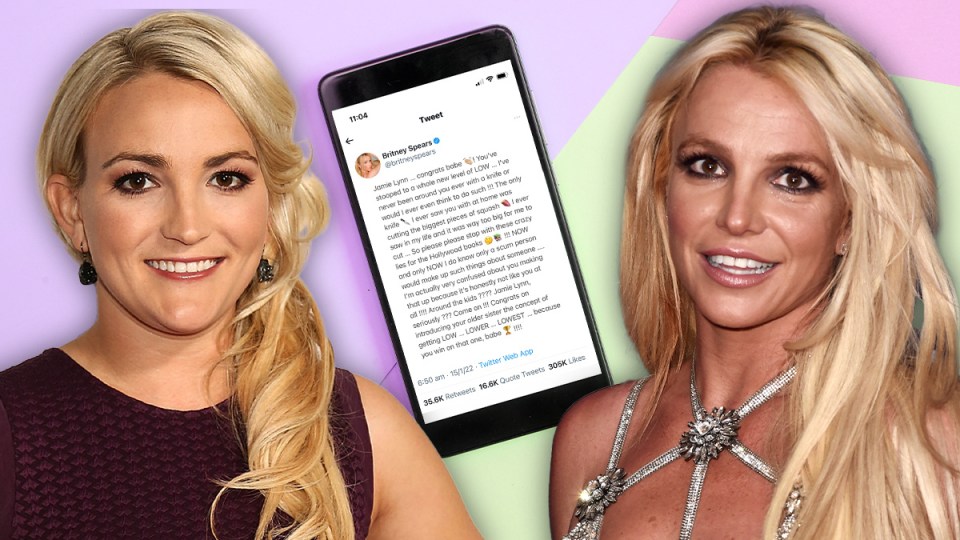 Britney has called her sister “scum”, telling the world Jamie Lynn has stooped to “a whole new level of LOW”.

The fight intensified last Wednesday after the younger Spears, 30, sat down with Good Morning America to plug her memoir Things I Should Have Said.

Details on Jamie Lynn’s relationship with her sister before, during and after Britney’s controversial conservatorship was a prominent part of the interview.

Britney was freed from the conservatorship in November, allowing her to make her own financial and personal decisions for the first time since 2008.

During the court proceedings last year, Britney expressed her desire to sue her family and share with the world how they treated her.

Jamie Lynn tried to reiterate her love and support for Britney, telling Good Morning America that she had nothing to do with the conservatorship and that Britney had trusted her to look out for her sons.

She said she is her sister’s “biggest supporter”.

After her sister’s interview, Britney shared her first lengthy response on Twitter.

Britney particularly took issue with a quote from Jamie Lynn’s memoir that described her behaviour before the conservatorship as “erratic”, “paranoid” and “spiralling”.

“My sister said how my behaviour was out of control. She was never around me much 15 years ago at that time,” wrote Britney, who is 10 years older than her sister.

“So why are they even talking about that unless she wants to sell a book at my expense??? REALLY???”

Last year, Britney posted a statement on Instagram making it very clear that she didn’t appreciate her sister performing her songs.

Even so, Jamie Lynn described this response as “somewhat confusing” in the interview and said she doesn’t think Britney is “personally upset” with her.

To be clear, Britney is.

“I know it may sound like a silly thing to most people but I wrote a lot of my songs and my sister was the baby,” she explained.

“She never had to work for anything. Everything was always given to her!!!! If you were me, you might understand asking for 13 years for remixes to go into a small venue show and on tours !!!!”

Britney described the medley as everything she had ever wanted to perform.

“They all got to DO IT and PLAY ME and I always sat there and took it.”

In her memoir, Jaime Lynn alleged that Britney once grabbed a knife and locked them in a room together when they were young.

On Twitter, in a scathing statement, Britney congratulated her sister on stooping to “a whole new level of LOW”.

“I’ve never been around you ever with a knife or would I ever even think to do such,” she wrote.

“NOW and only now do I know only a scum person would make up such things about someone.”

Jamie Lynn responded to her sister’s criticism in a statement shared to Instagram.

Jamie Lynn repeated her support for her sister, but said it has become exhausting trying to prove to the world that she has been there for Britney.

“Conversations and texts we have in private don’t match what you post on social media,” she wrote.

Jamie Lynn said it is difficult to explain to her daughter why their family is continuously threatened as a result of Britney’s “vague and accusatory posts”.

“She could tell the truth and put an end to all of it in one second if she wanted to.”

Jamie Lynn also dismissed Britney’s criticism that her life has been easy, or that the memoir is about her.

“I can’t help that I was born a Spears too, and that some of my experiences involve my sister,” she wrote.

Referencing her previous statements on Twitter, Britney explained her “harsh words” came from a place of hurt.

She acknowledged that while Jamie Lynn has worked hard, it doesn’t compare to what Britney went through under the conservatorship.

“What Dad did to me, they don’t even do that to criminals,” she wrote.

“So go ahead and say whatever you want … it’s so tacky for a family to fight publicly like this. You say you love me … your loyalty is still with the people that hurt me the most.”

As for Jamie Lynn’s purported support, Britney claimed her sister only came to her aid a year ago.

“I needed you WAYYYYYY before that,” Britney wrote.

The end … for now

In her latest response, Jamie Lynn asked her sister to call her and handle their issues privately, “like sisters should”.

Jamie Lynn criticised her sister’s choice to do everything on a public platform and asked her to end the narrative that she hasn’t been there for her in the past.

“I’m happy to share how many times I’ve reached out to you, supported you and tried to help you,” she wrote in an Instagram story.

“This is embarrassing and has to stop. Love you.”

It’s unclear if that call took place, but Britney has yet to respond publicly.